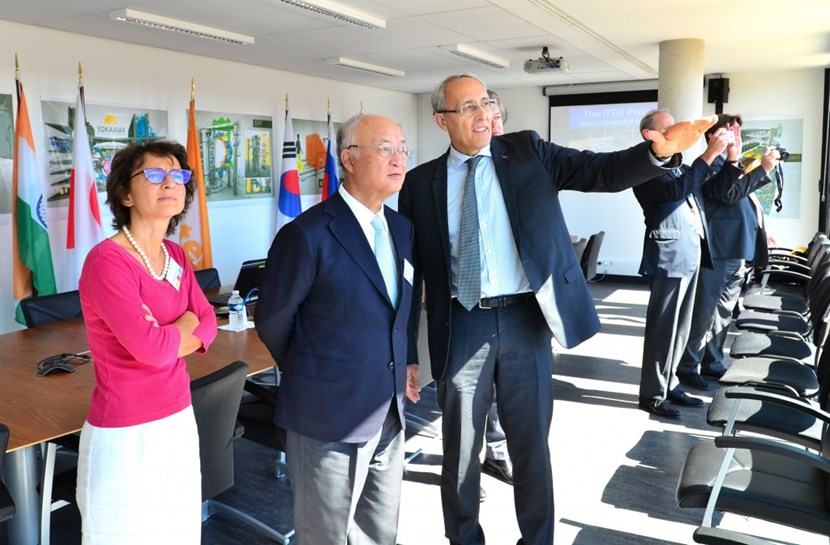 The ITER Director-General's office, on the fifth floor of the Headquarters Building, offers a striking view of the construction site. From left to right, Anne Lazar-Sury, French governor at IAEA, IAEA Director General Amano, ITER Director-General Bigot, and Jean-Louis Falconi, French ambassador to the IAEA.
This marked the first occasion since 2012 for Director General Amano to see first-hand the progress of construction on the ITER worksite. Both directors characterized the visit as an opportunity to explore possibilities for expanded cooperation between their respective organizations.


Director General Amano's enthusiasm at seeing ITER's progress in construction and manufacturing was apparent throughout the visit. It was especially evident during the worksite tour, which included the Tokamak Pit, the Assembly Hall, the Cryostat Workshop, and the Poloidal Field Coils Winding Facility. In the discussions that followed with the ITER Director-General, the IAEA head emphasized the great promise that fusion energy holds, both for its inherent safety and environmentally friendly characteristics and also because the virtually inexhaustible supply of fuel makes fusion "capable of meeting ... energy requirements around the globe."


The timing of the visit was superb, since Mr Amano will open the upcoming 26th IAEA Fusion Energy Conference in Kyoto, Japan next month. A special area of focus will be to capitalize on ITER's ongoing progress in a way that benefits not only ITER Members, but also the larger Member State community of the IAEA. As he noted, "ITER's impressive work is crucial to advancing research in this field," which ultimately will have benefits globally, well beyond the ITER membership.


For the past three decades the IAEA has been a central hub for collaboration among countries working to demonstrate the feasibility of fusion energy. From the time that the ITER Organization was formally established in 2007, the IAEA Director General has served as the depositary for the ITER Agreement. The IAEA and ITER also maintain a Memorandum of Understanding for collaboration in areas of mutual interest.


Both directors agreed to explore additional areas for expanding this collaboration, to the mutual benefit of their constituent members. Areas that will be considered include knowledge management of the new technology breakthroughs developed through ITER and global education initiatives in plasma physics and fusion technology.