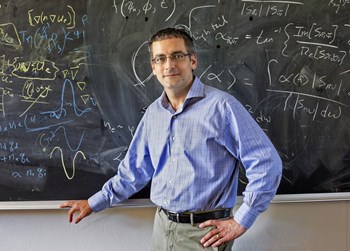 Physicist Dylan Brennan is co-lead principal investigator for the new task force on runaway electrons. Photo: Elle Starkman, PPPL
Runaway electrons, a searing, laser-like beam of electric current released by plasma disruptions, could damage the interior walls of future tokamaks the size of ITER. To help overcome this challenge, leading experts in the field have launched a multi-institutional centre to find ways to prevent or mitigate such events.


"This is like a strike force to solve the problem and we need to get it right," said physicist Dylan Brennan of the US Department of Energy's (DOE) Princeton Plasma Physics Laboratory (PPPL) and Princeton University. "It's very clear that runaways will be a problem," said Brennan, who with Xianzhu Tang of Los Alamos National Laboratory is co-lead principal investigator. "The goal is to take different scenarios for runaway electrons and come up with a recipe for solving them."


The project, called "Simulation Center for Runaway Electron Avoidance and Mitigation," will combine simulations and data from worldwide experiments to explore the causes and solutions for runaway electrons. Members are from nine US universities and national laboratories. Participants include the Oak Ridge, Lawrence Berkeley and Los Alamos national laboratories, the universities of Texas, California-San Diego, Columbia University and General Atomics in San Diego. Support totals $3.9 million over two years from the DOE's Office of Science.


Runaway electrons are relativistic—they travel at nearly the speed of light. To control these particles, researchers must utilize equations derived from Einstein's special theory of relativity, which describes the effect of relativistic speeds on moving bodies.


These equations apply to the huge ITER Tokamak. "ITER will be operating in a regime of plasma parameters well beyond the reach of any existing tokamak experiment," said Amitava Bhattacharjee, head of the Theory Department at PPPL.


"Therefore, one must rely on the predictive power of theory and simulation, which must be validated by comparison with present-day experiments and extrapolated to ITER conditions."


Research of the centre will contribute to a disruption mitigation system to be incorporated in ITER. The US ITER Project Office, based at Oak Ridge National Laboratory (ORNL), will be responsible for the system. Projected tasks include establishing the physics basis for the generation and evolution of runaway electrons, exploring how to avoid them, and investigating the best candidate techniques for mitigating the problem.