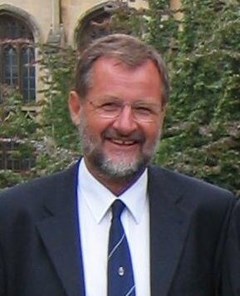 John How is a globe-trotting plasma physicist. In the course of his career, he's worked in diagnostics, operations, technical coordination and data management in six operational fusion devices, plus ITER.
"Meetings," says John How, Senior Scientific Officer for External Coordination, "should only exist as part of a dynamic process, where the work is advanced and issues get resolved. A meeting should never be an end in itself."


Accordingly, effective meetings take careful planning ahead of time, and accurate and accessible documentation afterwards. "In general, at ITER committee meetings we have too much material and a very tight timetable," explains John. "A lot of work is needed to get it into a form that is useable and efficient—to create the tools that help to move the work forward."


A physicist with a PhD in diagnostics, John has been involved with coordinating committee meetings for ITER since joining the project in June 2003. At the time, ITER was in the transitional phase between Engineering Design Activities and the siting of the project, and the ratification of the ITER Agreement that formally created the ITER Organization was still four years away.


John ran the monthly Technical Coordination Meeting and the early Home Team-Participant Team meetings (later to become the ITER Organization-Domestic Agency meetings). "We sorely needed a tool to track meeting schedules, make agendas and minutes available, organize documents, and keep abreast of the status of design changes," says John. "I created a website for all ITER collaborators worldwide—the first ITER technical web—and I used to update the pages every night after work." That original HTML tool was later migrated to the ITER Sharepoint platform, and John remains a major contributor today.


A second major task accomplished during those early years was the coordination of ITER's top-level PID, or Project Integration Document, which was a detailed description of the future facility's technical scope and requirements. He followed this through three annual editions, and more recently, took over the responsibility for the 1,000-page ITER Plant Description, part of the ITER Baseline that will be presented to Council in June.


Documents have evolved ... committees have evolved ... but John is still playing a central role. "At ITER, we can now say that the seven Members are working well together at a technical level. To me, it's very satisfying to see," says John.


A dual citizen of the UK and Australia, John began his career in plasma diagnostics, working as part of the diagnostics teams at the French TFR and Petula Tokamaks, the Wendelstein 7-A Stellarator in Germany, and the LT-4 Tokamak in Australia and participating in dozens of published papers in his field.


He moved toward the operational side of tokamak devices after joining the Joint European Torus in 1984. "In hindsight, I guess I can say that the technical side of plasma physics attracted me more than the theoretical side," remarks John. He was part of the Engineer-in-Charge team at the JET facility for 12 years, and Deputy Director ("Adjoint") of Operations at Tore Supra for three years before joining ITER.


John and his wife have been in Provence now for 13 years. "At ITER, I am now looking forward to slowing down, and returning to the operations team to pass on some of my knowledge and experience before retirement," says John. "I'm very optimistic for ITER ... we've gone to a very high level of design detail considering that the first building is not yet erected. The challenge now is to get it right the first time during a short and intense construction phase."