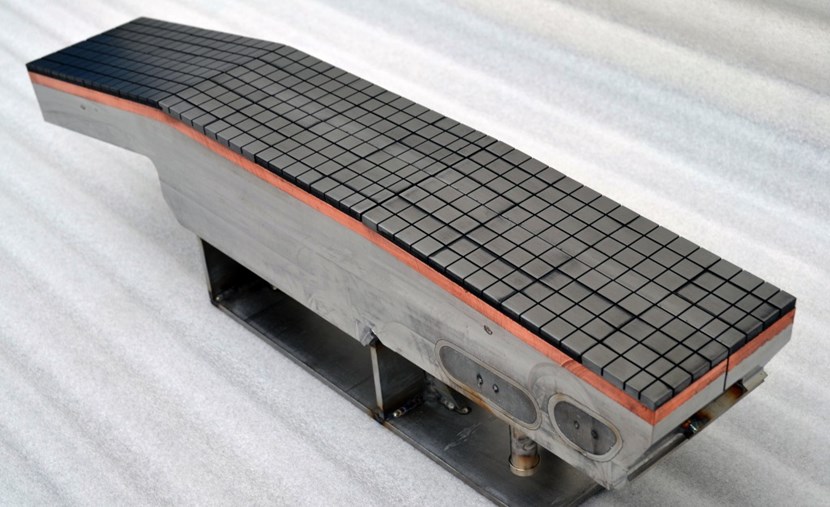 A Chinese Domestic Agency first wall ''finger pair.'' The first wall semi-prototype is composed of three such pairs, whose structure and dimensions are fully representative of those used in the design of the ITER blanket first wall panel. Three pairs were used for the screening test, of which two were then used for the thermal fatigue test.
In ITER, 440 blanket modules will completely cover the inner walls of the vacuum vessel to shield its steel structure and protect other components from thermal and high-energy particle fluxes. Front-facing elements, called first wall panels, will take the brunt of the heat. Two different first wall panel designs are being pursued based on the incident heat flux—a normal heat flux first wall panel option (designed for 2 MW/m2) and an enhanced heat flux first wall panel option (designed for 4.7 MW/m2). A stainless steel beam (not shown in the picture) provides the structural base of each panel, upon which are attached plasma facing fingers. These fingers consist of 8-to-10-millimetre-thick beryllium armour tiles, bonded to a copper alloy heat sink, and attached to a stainless steel structural element.


As part of the semi-prototype qualification program in China for its share of the enhanced heat flux first wall panels, pairs of "fingers" have undergone testing at the dedicated high heat flux test facility at the Efremov Institute in Saint Petersburg, Russia. They performed successfully at up to 4.7 MW/m2 for 7500 cycles and 5.9 MW/m2 for 1500 cycles. Neither unacceptable overheating nor temperature jump was observed during the test, and the appearance of the first wall fingers showed no significant alteration.


As per ITER technical requirements, the high heat flux testing was performed on actively cooled mockups of semi-prototypes. A screening test was carried out on three finger pairs at the start of the tests, during which the thermal load on the first wall surface was increased from 1 MW/m2 to 4.7 MW/m2 with steps of 1 MW/m2. Each increase in thermal load was made only after the finger pairs had reached temperature equilibrium. No anomaly was observed during the screening test.


A thermal fatigue test was then performed on two of these finger pairs over 7500 cycles at 4.7 MW/m2 and 1500 cycles at 5.9 MW/m2, each cycle consisting of 15 seconds of heating and 15 seconds of cooling. No unacceptable overheating of the two finger pairs was observed. Subsequent ultrasonic test results did not show defects on the beryllium to copper bonding, and there was no impact on the function and lifetime of the finger pairs. For the 5.9 MW/m2 test, a couple of hot spots were found that were within the boundaries of acceptability.


The Chinese Domestic Agency began its R&D effort on ITER enhanced heat flux first wall panels in 2004. The work (performed by the Southwestern Institute of Physics, SWIP) has progressed successfully as illustrated by the following achieved milestones: manufacture of high-purity beryllium, 2011; manufacture of small enhanced heat flux first wall mockups that passed high heat flux testing, 2013; optimization of mockups (including increasing the thickness of the beryllium tiles from 6 mm to 8 mm and successful thermal fatigue testing at 4.7MW/m2 over 16,000 cycles), July 2014.


These successful results open the way for the signature of the Procurement Arrangement, which is the precursor to series manufacturing.