A passage to India

Share Tweet
A passage to India
108 days, 10,200 kilometres, 16 countries, and only two flat tires. These are the remarkable statistics of a no-less-remarkable journey: a father and son who travelled from their Dutch hometown of Bergen to Gandhinagar in India—by bicycle. 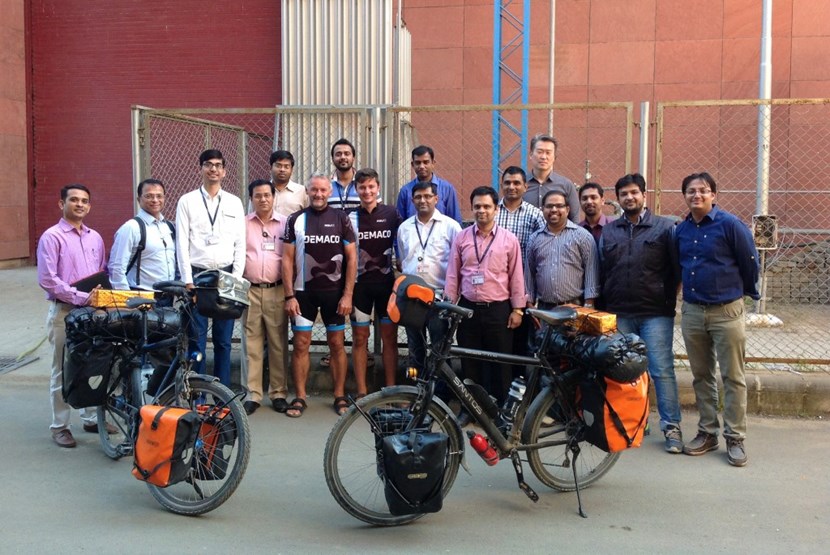 Why would they undertake such a trip? For one because they cherish the wisdom of the Indian philosopher Nisargadatta Maharaj, who wrote: "Once you realize that the road is the goal and that you are always on the road, not to reach a goal, but to enjoy its beauty and its wisdom, life ceases to be a task and becomes natural and simple, in itself an ecstasy."


But there is also an ITER connection.


Ronald Dekker, the father, is the director of the Dutch company Demaco, specialized in cryogenics. As a subcontractor to Linde Kryotechnik AG, Demaco supplied test infrastructure for the prototype cryolines at the ITER India cryogenic laboratory in Gandhinagar. Demaco also participated in the tenders related to the procurements for cryolines and cryodistribution.


"During the tender phases and the execution of the project, we learned to appreciate Indian culture and the cooperation with the different local parties," explained Ronald in an email a few days into their journey. "So because of positive memories, both professional and personal, my son Maurice and I decided to bike from Demaco in the Netherlands to Mumbai. Maurice finished his studies early in 2016, so it was a perfect moment to jump on our bikes."


And off they went, leaving Bergen, the Netherlands, on 3 August. During the following days and weeks, they cycled through Europe, Turkey, Iran, the United Arab Emirates and Oman. They made one exception, leaving the ground to fly from Muscat, Oman, to Ahmedabad, India, only to continue cycling all the way to the Institute of Plasma Research in Gandhinagar where they arrived on Friday, 18 November.


All those who signed up to follow the "Dekkers on Trek" website could track their daily progress ... the reckless drivers on the road to Serbia, their adventures in the Dubai desert, their hotel experience in Al Ain, Abu Dhabi, and many fascinating encounters with local people, and local dogs.


Upon their arrival at the Indian laboratory, the Dekkers were welcomed by IPR Acting Chief Administrative Officer PK Atrey, ITER India Cryogenic System Coordinator Ritendra Bhattacharya, and the ITER India cryogenic team.
The Dekkers ended their visit to the western Indian state of Gujarat with a last 130-kilometre stretch to Vadodara to participate in a cycle rally event along with 120 other bikers in promotion of the "Swachh Bharat" campaign, a movement for a clean India. From there, father and son will cycle their way to Mumbai (another 400 km) before returning to Amsterdam by plane and Bergen by bike.