Share Tweet
ITER-like WEST ready to go
Imagine a space shuttle "landing" on—or rather flying very close to—the surface of the Sun. The heat load it would be exposed to would be in the range of 10 to 20 MW per square metre. Speaking to media representatives last week, Alain Bécoulet, the Director of the French Institute for Magnetic Fusion Research IRFM, used this very image to convey the extraordinary challenge that the divertor of the ITER-like tokamak WEST will be facing. 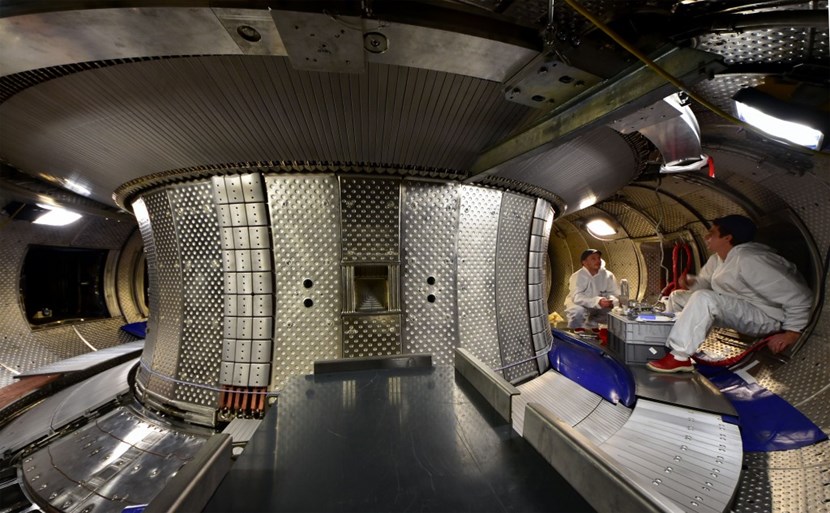 Inside the WEST vacuum vessel, IRFM technicians are busy installing components for protection against vertical displacement events. The machine will be entering Phase 1 of its experimental campaign in a few weeks.
The divertor is the component in a tokamak that, through its role of extracting the heat and ash produced in the plasma, is exposed to the highest heat loads of the machine.


Although WEST has a much smaller plasma volume than ITER and will not experiment with nuclear (deuterium-tritium) plasmas, its plasma-facing surfaces will be exposed to comparable heat loads.


"The heat load received by the divertor is directly related to the power that is used to heat the plasma," explains Jérôme Bucalossi, who heads the WEST project at IRFM. "In ITER, the total heating power will be in the range of 150 MW—that is, 50 MW of external heating plus 100 MW generated by the alpha particles from the fusion reaction.¹ When you consider that an average of 100 MW will be deposited on the divertor and you factor in the surface of the plasma-facing components, this amounts to 10 to 20 MW per square metre."²


By doing the math for WEST, Bucalossi explains, you arrive at the same 10 to 20 MW per square metre. How? At WEST, 15 MW of external heating power will be injected in the plasma, with no additional power generated internally by its pure deuterium plasmas. "Of these 15 MW," he says, "an average of 10 MW will be deposited on the surface of the divertor (0.5-1.0 square metres)." 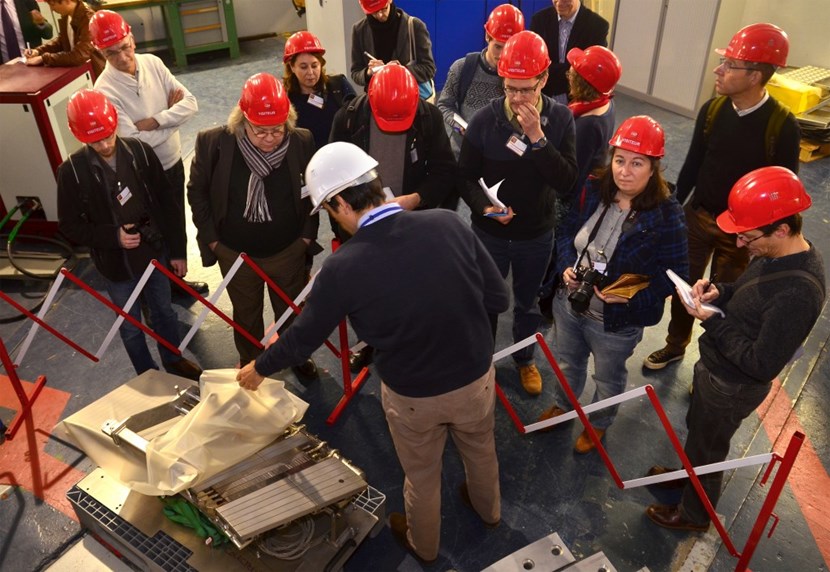 It takes 456 plasma-facing units, organized in twelve 30-degree sectors, to form the complete WEST divertor. In this picture, taken during last week's media visit, Jérôme Bucalossi introduces the sector that includes the six actively-cooled experimental monoblock assemblies procured by Japan and China.
In the first phase of the WEST operational program, due to begin in the coming weeks, only six plasma-facing units arranged into actively-cooled assemblies of 35 monoblocks will be part of the divertor; the rest consists of non-actively cooled tungsten-covered graphite blocks just like in JET and ASDEX Upgrade tokamaks. ITER Japan has provided three of the assemblies and the Institute of Plasma Physics of the Chinese Academy of Sciences (ASIPP) the other three. This summer, eight additional plasma-facing units from Europe will be installed. 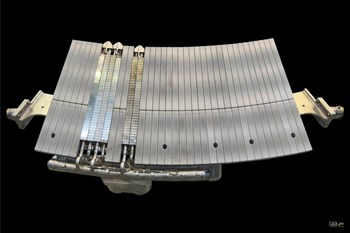 The six plasma-facing units from China and Japan, each made of 35 tungsten monoblocks, are clearly visible in this image. The other 29 are non-actively cooled tungsten-covered graphite blocks just like in the JET and ASDEX tokamaks. © Christophe Roux - CEA
In this configuration WEST will produce plasma shots lasting only a few seconds. Shorts plasmas will preserve the life expectancy of the tungsten-covered graphite blocks, while allowing engineers to define the optimal geometry of the monoblock assemblies.


In early 2019, when a complete actively-cooled tungsten divertor is installed, WEST will produce ITER-relevant plasmas of up to 1000 seconds. At that point the rejuvenated Tore Supra machine, which will celebrate the 30th anniversary of its commissioning in 2018, will fully enter into its role as a test bench and risk limiter for its giant neighbour ITER.


(1) The neutrons from the fusion reaction in ITER will generate approximately 400 MW of power that do not participate in the heating of the plasma. Bearing no electric charge, the neutrons escape the magnetic cage and impact the inner wall, where their kinetic energy is transformed into heat.


(2) One of WEST's missions will be to determine more precisely how, and over how large a surface, heat loads are deposited on the divertor's plasma-facing components.
Read more about WEST here.