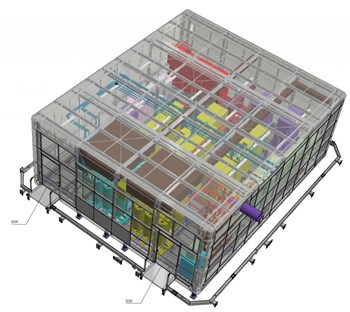 The power required for the operation of SPIDER will be provided in part by this room-size ion source extraction grid power supply provided by Europe.
In Padua, Italy, the neutral beam test facility for ITER—PRIMA—is taking shape. The physical infrastructure has been completed, components are being installed for the ion-source test stand SPIDER, and manufacturing is underway for the components of the injector test stand MITICA.


The goal of SPIDER is to develop a full-size ion source equivalent to that which will be used on the heating neutral beams and the diagnostic neutral beam at ITER.


On 6 February 2017, the ownership and responsibility for the first part, the ion source extraction power supply ISEPS, was transferred from the European Domestic Agency to the ITER Organization. As the test facility is located in Italy, the operation of ISEPS will be in the hands of Consorzio RFX; for this reason, the responsibility for use of the power supply was transferred on the same day to the RFX team. 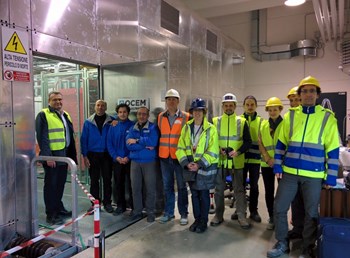 The multi-year development of the ion source extraction grid power supply came to an end in 2016, with successful site acceptance tests at PRIMA. (Photo: April 2016)
The signature process, which took place remotely, is the culmination of a number of key milestones: a final design review on the ion source and extraction power supply in May 2011; successful factory acceptance tests in May 2014; delivery to the PRIMA site in April 2015; successful site acceptance tests in April 2016; the completion of all site activities in September 2016; and finally the signature of the transfer forms on 1 February 2017.


The achievement of so many successive milestones was the result of close collaboration between the European Domestic Agency, the supplier OCEM ET (Italy) and its main subcontractor Himmelwerk GmbH (Germany), PRIMA host Consorzio RFX, and the ITER Organization.