"Today I saw the dream turning into reality"

Share Tweet
"Today I saw the dream turning into reality"
A little less than ten years ago, on 21 November 2007, Chris Llewellyn Smith—a theoretical physicist who was at the time the director of the United Kingdom's fusion program—was elected Chair of the ITER Council. The ITER Organization had just been established and clearing and levelling of the ITER site would begin only a few months later. ITER was still a paper project waiting to coalesce into a tangible reality. 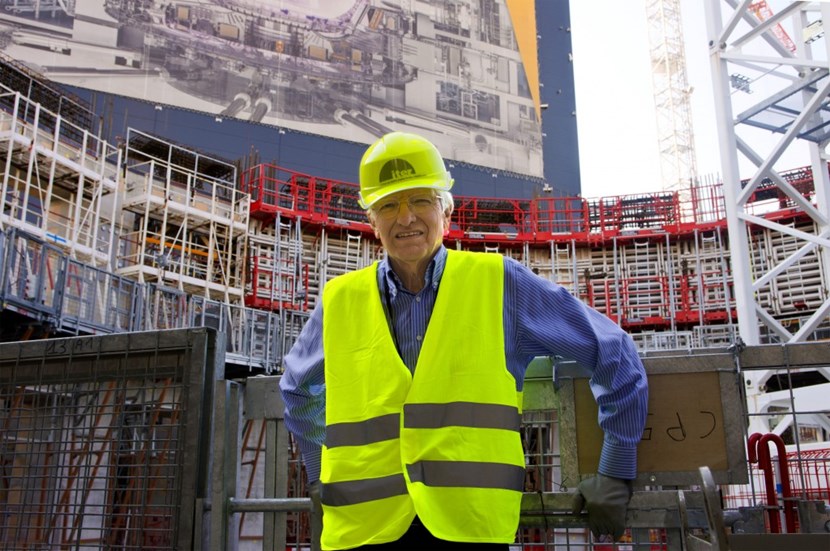 Chris Llewellyn Smith was the first Chair of the ITER Council (November 2007-December 2009). A theoretical physicist, he is now the Director of Energy Research Oxford and Council President for SESAME (International Centre for Synchrotron Light for Experimental Science and Applications in the Middle East).
His term as ITER Council Chair ended in December 2009, a year marked by the completion of the platform preparatory works in April and by the opening of the International School for the children of ITER staff in October.


Last week, on 5 April, Sir Chris was back at ITER for the first time since the end of his term. His program included two presentations¹ to the ITER community and of course a tour of ongoing construction.
Back from the worksite, he was able to sit with Newsline for an informal interview.


It has been almost eight years since you last saw the ITER site with your own eyes. What did you feel when you went down into the Tokamak Pit this morning?


I can say that today I saw the dream turning into reality. Of course, I've been watching the progress of construction and manufacturing through the ITER website and publications. But this morning was a different experience. Suddenly, it's real and I can imagine how the Council members feel when they look through the windows of the Council Chamber on the fifth floor.


No, I never did. But it's always difficult when you are putting money into a project and don't actually see anything tangible coming out of it ─ I mean anything concrete and visible by all. It's like the synchrotron project² I'm involved with now in the Mideast. Big ambitious projects take time. It took more than a century to build a cathedral ...


Does this mean that we've lost the capacity to project our dreams over long periods of time?


Not if the stakes are high enough. The cathedral builders were prepared to build for future generations, and I think many people are happy to build ITER for their children and grandchildren.


Do you think there is sufficient awareness, among members of the general public, of the importance of ITER and fusion?


We've certainly come a long way but there's still a long way to go. Now when I give a talk or a presentation on energy, there is always someone in the room who raises the question of ITER and fusion. Maybe that wouldn't have happened a few years back ...


(1) "SESAME: Science and Diplomacy in the Middle East" and "Can Future Energy Needs be Met Sustainably?"
(2) SESAME (International Centre for Synchrotron Light for Experimental Science and Applications in the Middle East) is a 2.5 GeV third-generation synchrotron light source which is about to come on line in Jordan. The Members are currently Bahrain, Cyprus, Egypt, Iran, Israel, Jordan, Pakistan, the Palestinian Authority and Turkey. Sir Chris is the President of SESAME's Council.