Share Tweet
China completes its superconducting strand program
To mark the end of a 10-year campaign to produce China's share of superconducting strand for the ITER magnet systems, the Chinese Domestic Agency organized a ceremony attended by more than 100 people in Xi'an, a capital city in the northwest of the country. 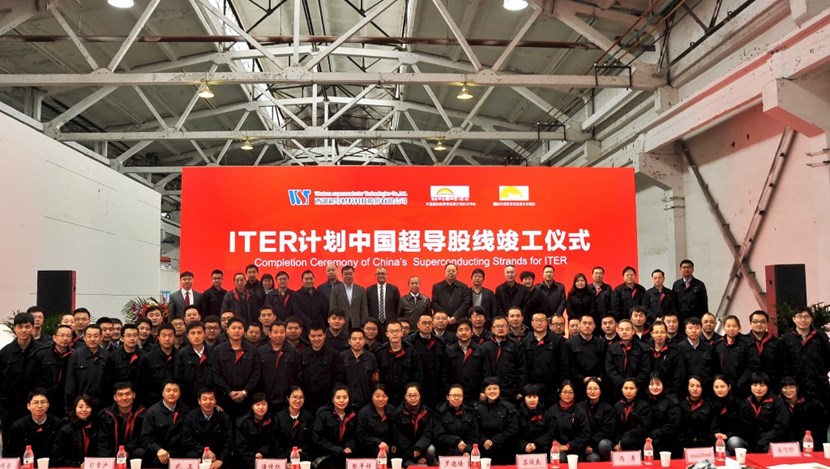 The completion of a 10-year campaign in China to produce superconducting strand for ITER's magnets was celebrated in March, as the last truck left the supplier's facility in Xi'an.
On 13 March representatives from government, industry and the ITER Organization gathered to reflect on the road travelled and celebrate the program's success.


Chinese industry has produced approximately 65 percent of the niobium-titanium (NbTi) strand needed for ITER's poloidal field coils and 7.5 percent of the niobium-tin (Nb3Sn) strand needed for its toroidal field coils. Manufacturing this high-tech material to stringent quality specifications required overcoming many challenges. But through detailed R&D and qualification phases, as well as close cooperation with the ITER Organization and other strand suppliers worldwide, the effort resulted in the promotion and development of Chinese suppliers and the elevation of the Chinese strand industry to world-class status.


The last batch of NbTi strand left the manufacturing facility in March. (Nb3Sn strand production was completed in 2015.)


Arnaud Devred, ITER Magnet Division deputy head in charge of superconductor systems and auxiliaries, attended the ceremony at supplier Western Superconducting Technologies (WST). "There were a number of difficulties, in particular at the beginning, because everything was new: new products, new workshops, new equipment and, above all, new people. But, from the start, there was strong will on the part of company management and staff to use this challenge as an opportunity to learn, grow and develop. Today we are celebrating the hard work and success of WST and of the many people who have contributed. This is good for WST, it is good for China, and it is good for ITER ... and I feel very proud to have been part of this adventure."