Saving time on the way to ITER operation

Share Tweet
Saving time on the way to ITER operation
The huge database that the European tokamak JET has accumulated, both during the deuterium-tritium campaigns of the 1990s and in more recent operations with an ITER-like beryllium inner wall and tungsten divertor, is of unique value to ITER.


Last week, safety specialists from JET and the ITER Organization met at ITER Headquarters to discuss the sharing of this trove of information, identify and transfer the ITER-relevant data, and strengthen communication between teams at the European machine and the international project. Newsline seized this opportunity to sit with JET exploitation manager Lorne Horton, and Xavier Litaudon—head of the EUROfusion ITER physics department.¹ 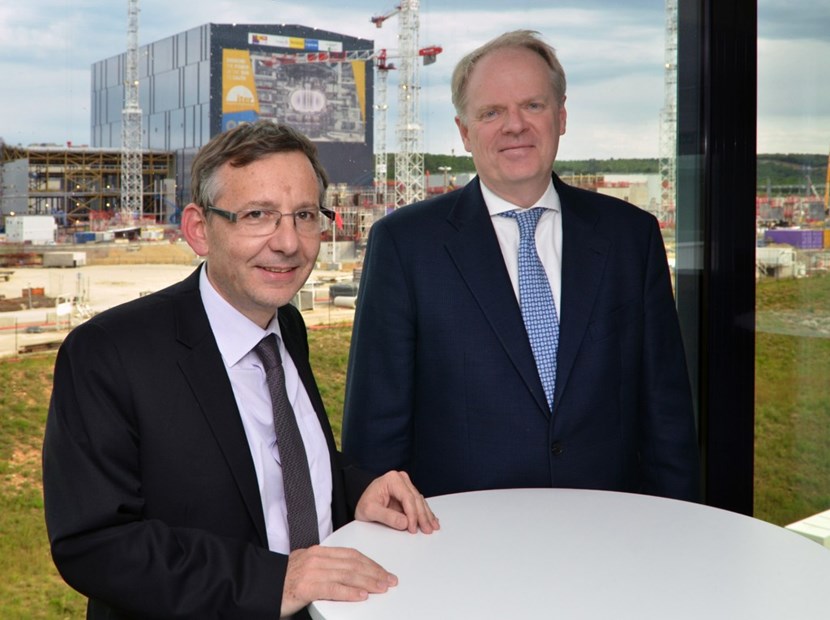 Both Xavier Litaudon, head of the EUROfusion ITER physics department, and Lorne Horton, JET exploitation manager, are confident that the upcoming operations ''will save significant time on the way to ITER's deuterium-tritium operation.''
What's happening at JET these days?


We have been in shutdown since November last year and will remain in shutdown until September, at which time we will be in a configuration to operate in deuterium-tritium. Of course, this doesn't mean that we have been idle: we are busy maintaining and refurbishing equipment, calibrating diagnostics, removing and analyzing samples—asking, for example, how much fuel, how much dust was retained from recent operations?


We are also building the infrastructure to accommodate a shattered pellet injector, currently being manufactured by Oak Ridge National Laboratory (US), which will allow researchers to study disruption mitigation scenarios.


In parallel, we are deeply involved in the analysis of the highly successful 2016 campaign and in preparation for deuterium-deuterium and tritium-tritium operation in 2018, and deuterium-tritium (DT) in 2019-2020.


For the preparation of these challenging experimental campaigns, we have set up a set of analysis and modelling campaigns where all EUROfusion scientists (around 300 involved) are welcomed to work jointly at the Culham site during dedicated weeks.


We don't often hear of tritium-tritium operation. Can you explain?


The mass of the particles plays an important role in the stability and in the energy transport within the plasma. We want to have a deeper understanding of these phenomena before going into nuclear operation with the deuterium-tritium mix.


In a nuclear plasma, deuterium (mass 2) makes up half of the particles and tritium (mass 3) make up the other half, which translates into an average particle mass in the plasma of 2.5.


In order to understand the behaviour of this nuclear plasma you can extrapolate from what you observe in pure deuterium plasmas. This is what fusion research does on a routine basis and what we will also be doing in 2018. But extrapolations lack accuracy. We'll get much more precise data by implementing a pure tritium plasma and interpolating the results from both deuterium and tritium plasmas.


But tritium is expensive ...


Indeed. We will have 60 grams of tritium on site. By recirculating it about a dozen times in our tritium plant, we'll be able to inject a total of approximately one kilogram throughout the whole campaign. But the actual burn, and hence the total consumption, will be tiny. 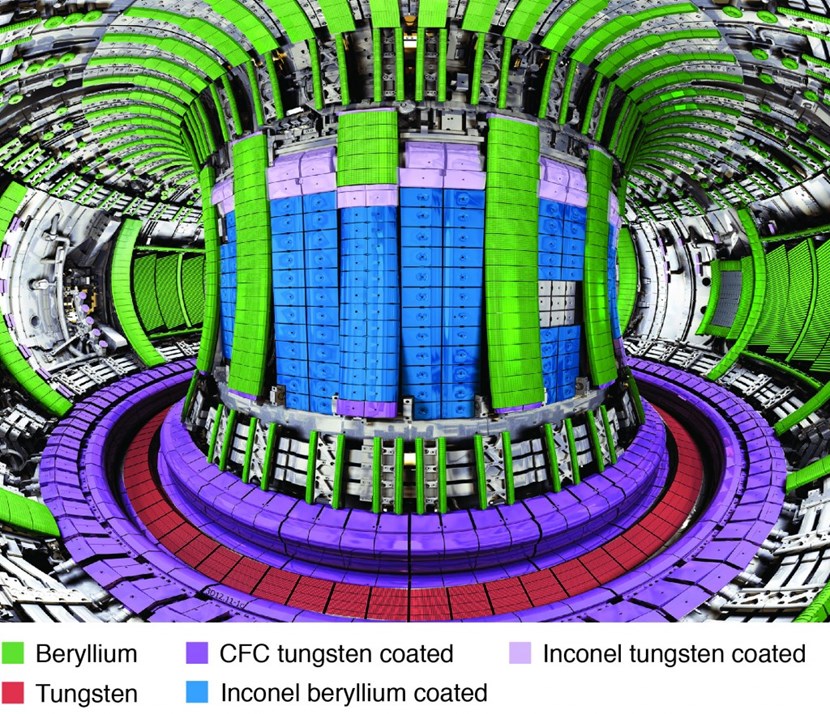 JET's beryllium-clad inner wall (in green) has many advantages, but it's much less forgiving than the previous carbon wall. Test campaigns run at JET permit scientists to verify the physics models of plasma-wall interaction and modelling tools for ITER.
Full-fledged deuterium-tritium operation is set to begin in late 2019. What has changed since JET's last DT campaign in the 1990s?


A quarter century ago, JET was equipped with a carbon wall. In addition, the focus was mainly on achieving maximum fusion power, even if it was transient. Since 2011 JET has operated with an ITER-like wall (tungsten and beryllium plasma-facing components) and has acted as a test bed to verify the physics models of plasma-wall interaction and modelling tools for ITER.


However, the fact that our coils—contrary to those of ITER—are not superconducting still imposes a limitation of approximately 5 to 6 seconds on the duration of plasma pulses.


In the campaign we are presently planning, we'll have 40 MW of heating power and we are aiming for power levels in the range of 10 to 15 MW for 5 seconds. In terms of fusion energy produced, the difference is considerable.


What will the ITER-like wall change in the context of the DT campaign?


A beryllium-clad inner-wall, like ITER's, has many advantages. But it changes everything relative to previous experiments with a carbon wall. Because beryllium is not as tolerant to high-power long-duration pulses, it makes things more difficult.


But results from our recent campaign make us confident. What we have learned and what we will continue to learn with the upcoming operation will save significant time on the way to ITER's deuterium-tritium operation.


¹ The Joint European Torus (JET) is the largest tokamak in the world and the only one with deuterium-tritium capability. It is located at Culham, UK and operated by the Culham Centre for Fusion Energy (CCFE) on behalf of its European partners, under the EUROfusion consortium.