Share Tweet
Spot the differences
In June 1997, the ITER EDA Newsletter—the IAEA publication that chronicled the progress of the ITER Project from 1988 to 1998—published a drawing of the planned layout for the ITER site. 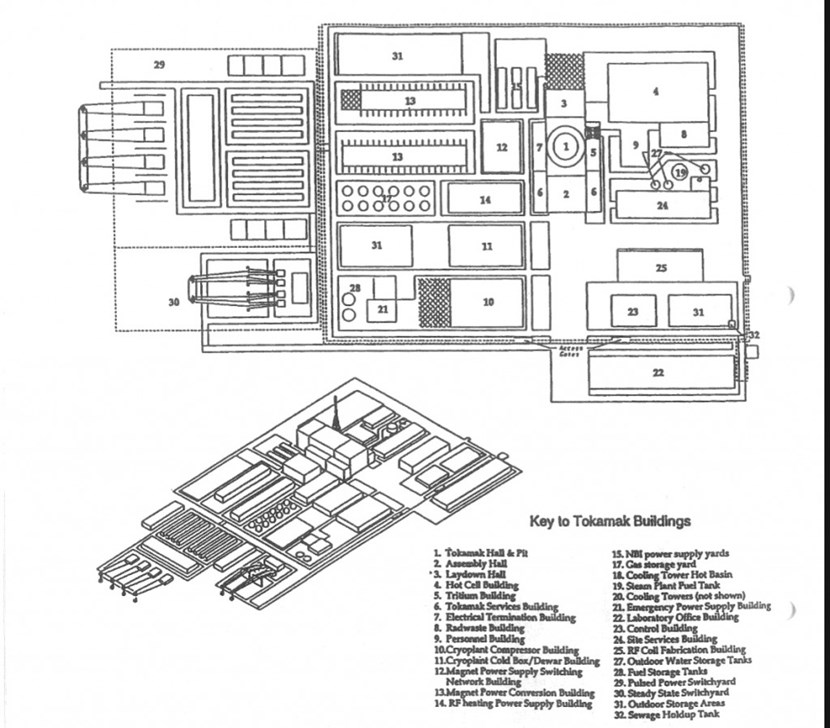 The 1997 layout was for a geographic abstraction referred to as the ''generic'' site. It was designed to accommodate a machine ''as vast as Saint Peter's basilica in Rome''...
Twenty years later, as actual steel-and-concrete structures are sprouting on the ITER site in Saint-Paul-lez-Durance, France, the comparison between the 1997 projection and the 2017 reality is quite instructive.


In 1997 none of the four project participants (Europe, Japan, Russia and the US) had yet proposed to host the installation. As a consequence, the layout was for a geographic abstraction referred to as the "generic" site.


Günther Janeschitz, currently the deputy head of the ITER's Central Integration Office, remembers that for practical reasons the unofficial topological reference was a site located north of San Diego (a), not far from the San Onofre nuclear plant.


The device that was projected at the time was a "serious reactor-class" machine, much bigger (b) than the one that is being built today and aiming for ignition (c). Its dimensions impacted the size of area planned for the scientific installation (100 hectares versus 42 today) and some (but not all) of the buildings on the site layout.


The Tokamak Hall and Pit (1), the Hot Cell Building (4) and the cryoplant (10 and 11), for instance, were planned to be significantly larger.


To the north of the Tokamak Hall and Pit, there is a building on the layout that doesn't exist today—one which occupies a surface almost equivalent to that of the Assembly Hall (2). It is the Laydown Hall (3), where big components like the cryostat lid could be laid down to facilitate maintenance.


The Control Building (23) is located to the south of the RF Coil Fabrication Building (25)— probably a typo for "PF" (poloidal field)—and faces the Laboratory Office Building (22).


Building 22 was relatively small compared to today's Headquarters building. It was not supposed to accommodate more than 250 people—"the management considered that it was enough to run the whole ITER operation," says Günther.


One building that appears to be "missing" is the massive three-storey Radiofrequency Heating Building which, today, stands adjacent to the Assembly Hall. In the 1997 layout, it was located inside the Assembly Hall.


Halfway between the Radwaste Building (8) and the Site Service Building (24), which now stands near the Radiofrequency Heating Building, is a large cylindrical Steam Plant Fuel Tank (19).


What could that have been intended for? "Baking," says Günther. "All tokamaks need to 'bake' their vacuum vessel in order to get rid of impurities and unwanted molecules. At the time, the plan was to use steam at a temperature of 300 °C, but that project was abandoned because of potential corrosion problems."


In today's ITER the baking (at 200 °C) will be done by the water cooling system, with pressurized water heated electrically. There are of course several other differences to be spotted (contributions are welcome!) between today's site and yesteryear's...


In July 1997, the ITER Detailed Design Report, which included the ITER site general layout, was validated by the ITER Council at its 12th meeting in Tampere, Finland.


Dark clouds however were piling up on ITER's horizon. In 1998, the US left the project ... to return only in 2003. By that time, a new ITER design had matured: the machine was to be smaller, less powerful (down to 500 MW from the original 1,500 MW) and of course less costly for the three remaining members, Europe, Japan and Russia (d).


This is the ITER that is being built today.


(a) In mid-1992 three "Joint Work Sites" were established (Garching, Germany; Naka, Japan; and San Diego, US) to facilitate and speed up design work for ITER.
(b) "As vast as Saint Peter's basilica in Rome" used to say Robert Aymar, who headed ITER from 1994 to 1997. The projected machine had a large radius of 8.2 metres as compared to today's 6.2 metres and weighed 70,000 tonnes versus 23,000 tonnes today. As a consequence, the diameter of the enclosing cryostat was 6 metres larger.
(c) Ignition occurs when the energy transferred to the plasma by the helium particles is sufficient to maintain the conditions for fusion reactions to occur, without external heating.
(d) China and Korea joined in 2003, India in late 2005.