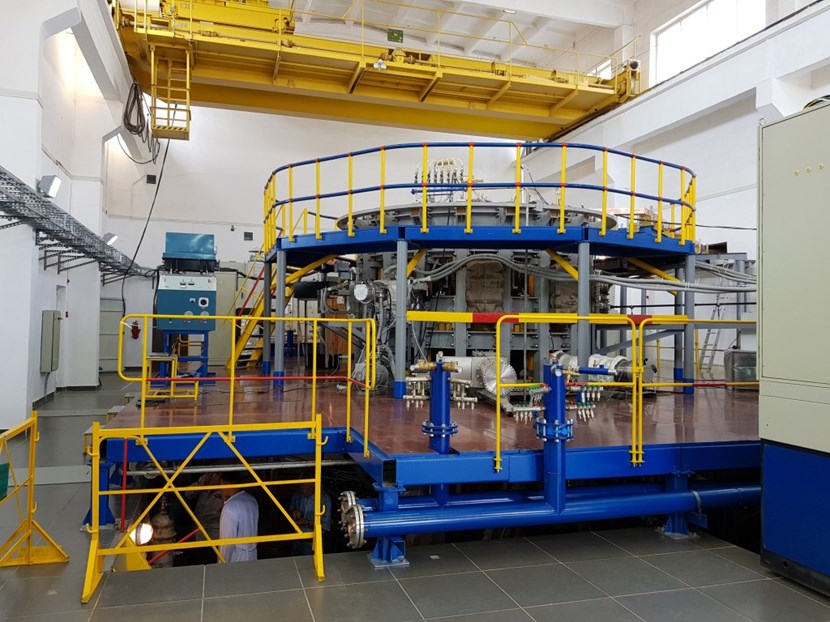 Please welcome KTM, the most recent addition to the worldwide tokamak family. KTM, the Kazakhstan Tokamak for Material testing, celebrated its physical start-up on 9 June in the city of Kurchatov, eastern Kazakhstan.
"We are happy to report that the main objectives of the start-up have been achieved," reported lead scientist Irina Tazhibayeva at the World Scientific and Engineering Congress held this week in the Kazakh capital of Astana. 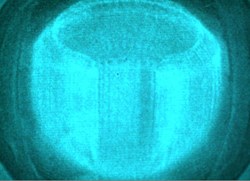 A photo of the KTM plasma discharge, which lasted approximately 20 ms (captured from a video). The first stage of physical start-up has now been achieved.
With a major plasma-radius of 0.9 m the spherical KTM device is much smaller than ITER (6.2 m). But the Kazakh machine is designed to operate with heat loads of up to 20 megawatts per square metre, which is in the same range as the ITER device. This characteristic makes the machine a very attractive test bed for investigating the materials that are best suited to the demands of electricity producing fusion reactors.


The choice of material for the plasma-facing components of future fusion reactors is an important one. Some component surfaces will have to withstand temperatures of more than 1,000 degrees for sustained periods over many years as well as face enormous neutron fluxes.


The KTM tokamak offers a unique feature among materials testing facilities: that is, a movable divertor and transport-sluice device allowing for the prompt replacement of the materials samples under investigation without the loss of vacuum in the vacuum chamber. A mobile receiving device inside the vacuum chamber is designed to manoeuvre all of the replacements through a gateway and to position the divertor plates through vertical and angle positioning.


In this way, 24 elements of the divertor (located at the bottom of the machine) can be replaced by remote control. 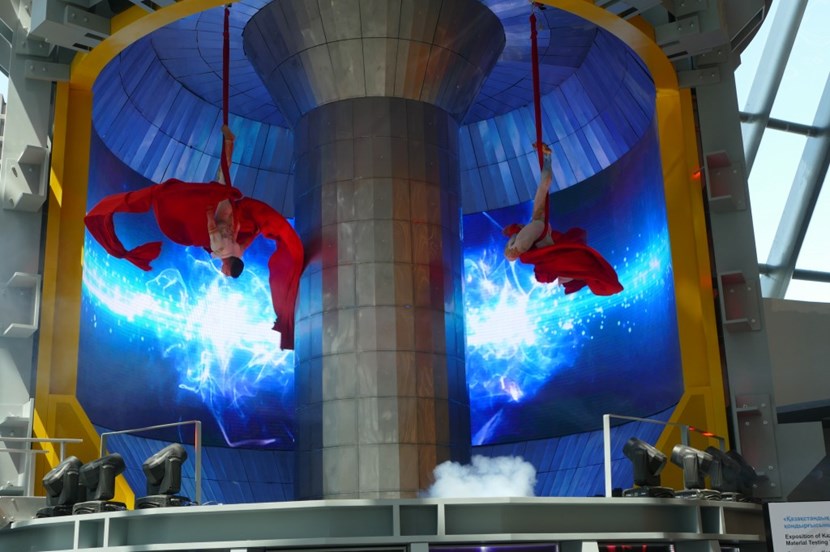 Dancers from the Carros De foc perform in a mockup of the KTM tokamak that figures prominently in the Kazakh pavilion at the Astana World's Fair. www.carrosfoc.com - ''A Brighter Future''
The aim of the first stage of physical start-up was to carry out debugging and functional tests on KTM's standard systems before further integrated tests are carried out in October. Present at the 9 June event were personnel who took part in the work from Kazakhstan's National Nuclear Center (host to the machine), the Thermonuclear Research Unit of the national Kurchatov Institute of Atomic Energy, and the Troitsk Institute of Innovative and Thermonuclear Research (Russia).


Once commissioned, the goals of the KTM research program include the testing of first wall and divertor materials such as beryllium, copper-chrome-zirkon-alloy, stainless steel, tungsten-copper-bi-metallic plates, tungsten, tungsten-rhenium alloy, tungsten and yttrium-oxide-alloy, and high density graphite; and studies of different types of particle/heat removal mechanisms under heat fluxes of 0.1-20 MW/m².


In May, six CIS countries (for Commonwealth of Independent States) signed an intergovernmental agreement on the joint use of the KTM tokamak—Russia, Kazakhstan, Belarus, Armenia, Kyrgyzstan, and Tajikistan. A little over two weeks later, on 11 June 2017, the ITER Organization signed a Cooperation Agreement with the National Nuclear Center of the Republic of Kazakhstan that includes access to the KTM tokamak for materials testing.