All eyes on the neutral beam source

Share Tweet
All eyes on the neutral beam source
Millions of watts of heating power can be delivered to the plasma using neutral beam injection—the work horse of ITER's external heating methods. A research and development program is underway to test the critical heating neutral beam components before the manufacturing phase is launched. 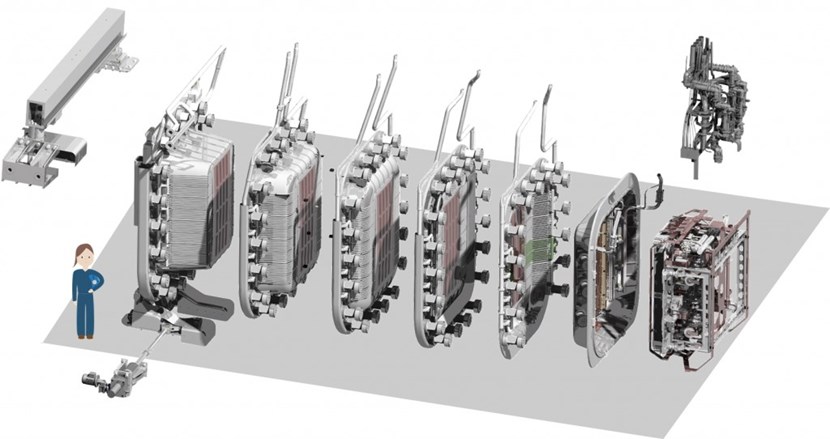 An exploded isometric view of the ITER/MITICA beam source, composed of a radio frequency ion source and a seven-grid extractor and accelerator.


Neutral beam injection consists of shooting high-energy particles into the plasma. Outside of the ITER Tokamak, charged deuterium particles are accelerated to the required energy level and then passed through an "ion beam neutralizer" where their electrical charge is removed to allow them to penetrate the magnetic cage. At that stage, the high-velocity neutral particles can be injected into the heart of the plasma where, by way of rapid collision, they transfer their energy to the plasma particles.


One of the most critical components of the heating neutral beam injector is the beam source—composed of the radio frequency ion source and a seven-grid extractor and accelerator.

R&D ahead of operation

Although neutral beams are routinely used in tokamak devices as the workhorses of auxiliary heating, ITER's neutral beams will be the first high-energy beams at 1 MV based on a negative ion source. Extensive R&D is underway to resolve the numerous technical challenges.

The critical components of the heating neutral beam program are being developed at the Neutral Beam Test Facility (PRIMA) in Padua, Italy. Europe, Japan and India are contributing all components according to the specifications of Procurement Arrangements signed with the ITER Organization; Italy is building the facility at Consorzio RFX as a voluntary contribution to the neutral beam development program. Two test beds are under development—SPIDER (which will test and develop the ITER-scale radio-frequency negative ion source) and MITICA (where a full-power, full-energy beam will be tested at full pulse length in preparation for the heating neutral beam at ITER).

The source generates 40 A of negative hydrogen or deuterium ions, which are then extracted and accelerated to 1MeV. These ions are converted further downstream in the injector to a "neutral" beam by neutralizing the ions in the gas cell neutralizer. After filtering out the remaining ions in the residual ion dump, neutrals are injected into the ITER plasma.


The heating neutral beam source—situated inside the neutral beam injector—is 3 metres wide, 3 metres deep and 4.5 metres high with a total weight of 15 tonnes. ITER will host two neutral beam injectors and space is reserved for a third in order to maintain an important potential for flexibility in the operation of the ITER facility should an upgrade be decided.


The interim period between the two stages of the framework contract has offered a good opportunity to review the findings and share experience with various experts on beam sources. On 1 June, the ITER Neutral Beam Section reunited more than 25 experts—from the European, Japanese and Indian Domestic Agencies, Consorzio RFX, and laboratories—in Padua for a collaborative exchange based on the respective experience of each supplier with manufacturing, experimentation and prototyping. 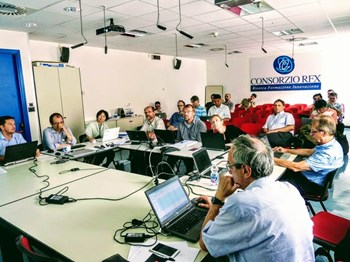 The technical collaboration meeting on 1 June in Padua brought together ion source experts before the launch of the second-phase of beam source framework contract—manufacturing—which is planned to start at the end of the year.
The objective was to ensure that all available expertise and knowledge for this critical component can be retrofitted into the manufacturing technical specifications. RFX Consorzio and the European Domestic Agency provided a detailed status of the technical improvements and feedback gained from suppliers during stage one and also highlighted the remaining open issues on which the ITER Organization is seeking advice from the ion source community.


India provided valuable feedback from the manufacturing of the diagnostic beam source (for example, achieving manufacturing tolerances of the beam source grids and positive results on the concept radio frequency coils). Experts from IPP Garching provided technical feedback on the type of radio frequency driver to use to prevent electrical breakdowns and the use of molybdenum coating based on the results from its experimental test beds BATMAN and ELISE.


From this fruitful discussion, held in a very collaborative atmosphere, several identified actions will now be tracked to directly benefit the ITER/MITICA beam source project, leading to higher confidence for the launch of the manufacturing phase of the MITICA heating neutral beam source.