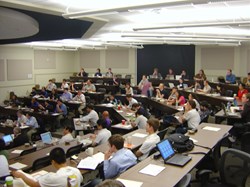 
Juan Sanchez, the university's Vice President for Research, presented the message to students during the IISS "Texas Barbecue Banquet." The purpose of IISS, held this year from 31 May to 4 June, is to educate young scientists and students on the issues related to the physics and engineering of the ITER experiment.


Host for the IISS was the Institute for Fusion Studies, a national center for theoretical research in plasma physics and fusion energy science. The institute's director, James Van Dam, also heads the US Burning Plasma Organization (USBPO), which helps coordinate the participation of the US fusion community in the ITER Project.


Three scientists from the institute were among the 20 IISS lecturers, representing seven countries and the ITER Organization. Entitled "Magnetohydrodynamics and Plasma Control in Magnetic Fusion Devices," this year's IISS was attended by 133 participants from 48 institutions representing 17 countries.

IISS students posing for a group photo.
For the first time, the IISS offered a workshop where students designed a plasma control system using commercial computational design tools. Because of the difficulty of achieving conditions necessary for the fusion reaction, control systems play a central role in sustaining the reaction and allowing the goals of the experiment to be achieved.


The theme for next year's school is "Energetic Particles in Magnetic Confinement Systems." It will be held June 6-10 in Aix-en-Provence, France.