Share Tweet
Communicating fusion | ITER meets world science journalists
In an age of information overload, effective communication—reaching new audiences with persuasive, inspiring messages—is an ever-increasing challenge. Communicating on complex science topics has in some ways become easier, given greater access to multimedia tools. But attention spans are becoming shorter, and messages more compressed. Gaining and holding an audience's interest with a 10-year-long narrative, like ITER's, is no easy task. 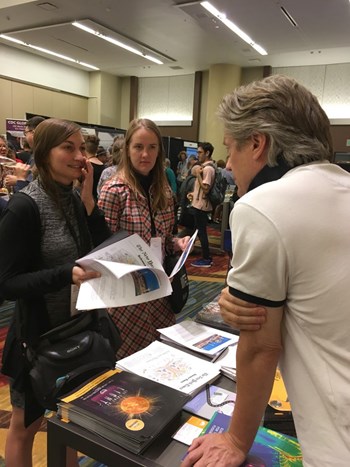 At the ITER booth, journalists and other attendees dropped by to take a virtual tour of the worksite, watch films on fusion, and ask questions of the ITER communication team. Pictured here is ITER Communication Head Laban Coblentz.
At the World Conference of Science Journalists (WCSJ) in San Francisco, where the ITER Project made its debut this past weekend, creative science communication was on full display.


At a Thursday evening concert, collected and projected scientific data representing 500 years of climate change—from the year 1800 to the year 2300—became the basis for a riveting if cacophonous musical score for piano, violin, and synthesizer¹. Greenhouses also served as tools for public communication on climate change, in this case by using the simulated environments of future centuries to demonstrate the effects on living (or dying) plants. Evening sessions held at the San Francisco Exploratorium and the controlled habitats of the California Academy of Sciences natural history museum provided richly textured backdrops for equally rich discussions.


At the ITER booth, hundreds of journalists and other attendees dropped by to take a virtual tour of the worksite, watch films on fusion, and ask questions of the ITER communication team. For many, it was their first introduction to the project; others knew about ITER, but had not fully understood its technological or managerial complexity. The experience of "flying" through the Tokamak Pit via Oculus Rift made the physical dimensions of the future reactor far more understandable and impressive.


Naturally, a fair number of sceptics also showed up, with the characteristic jokes about fusion being "always 50 years away." More than a few were converted—or, at a minimum, stunned into congratulations—to see the physical progress in ITER manufacturing and construction. Journalists from multiple countries expressed pride when they learned for the first time of their own country's substantial contributions: components in shipment from companies they knew, or already installed as part of ITER's emerging systems. One of the most common sentiments expressed was: "Why aren't we hearing more about ITER as a model for international science collaboration?"


A particular treat was a special showing of "Let There Be Light," the documentary from the Canadian EyeSteelFilms on fusion and ITER, at the historical Alamo Drafthouse Theater in the Mission District. While the film offers an honest portrayal of the difficulties and challenges of making fusion a reality, especially at ITER's massive scale, the journalists in attendance said they found the human narrative inspiring, and understood for the first time what drives fusion scientists and engineers to persevere.


On Sunday, the final day of the conference, a panel held at the University of California at Berkeley delved into the challenges and opportunities of nuclear technology. Led by Senne Starckx, who had visited ITER as part of the Media Days in October, the panel included fusion and ITER in a multi-faceted discussion. The central question was not the technologies, per se, but rather the journalists: should reporting focus on the science and technology? On the economics? On the politics? Or on the topics perceived to be of most interest to a general public, such as safety, waste, and climate impact? In this session as well, it was clear that fusion—and the ITER Project—are less well known to most audiences, including to journalists, than other cutting-edge technologies.


With more than 1,300 participants, the conference was a remarkable opportunity to both expand the network of ITER supporters and learn from other science communicators. The announcement on Saturday—that the next WCSJ will be held at the École Polytechnique Fédérale de Lausanne (EFPL) in Switzerland in 2019—was welcome news. ITER will have an opportunity to participate again, even more prominently: perhaps as a featured field trip for journalists, scheduled just as the ITER Project enters its machine assembly phase.
¹Change of Atmosphere: the ClimateMusic Project. More information here.