Share Tweet
Ten years later | A prodigious adventure
ITER began its existence as an aspiration in the early 1980s, as actors in the fusion community called for the joint machine that would demonstrate the feasibility of fusion energy. It acquired tangible reality on 21 November 1985, when President Reagan and Secretary Gorbachev advocated together for "the widest practicable development of international cooperation" in fusion research. Twenty-one years later to the day—on 21 November 2006—the representatives of the ITER Members signed the Agreement that established "the ITER International Fusion Energy Organization for the Joint Implementation of the ITER Project" and the legal framework for the project existed at last. 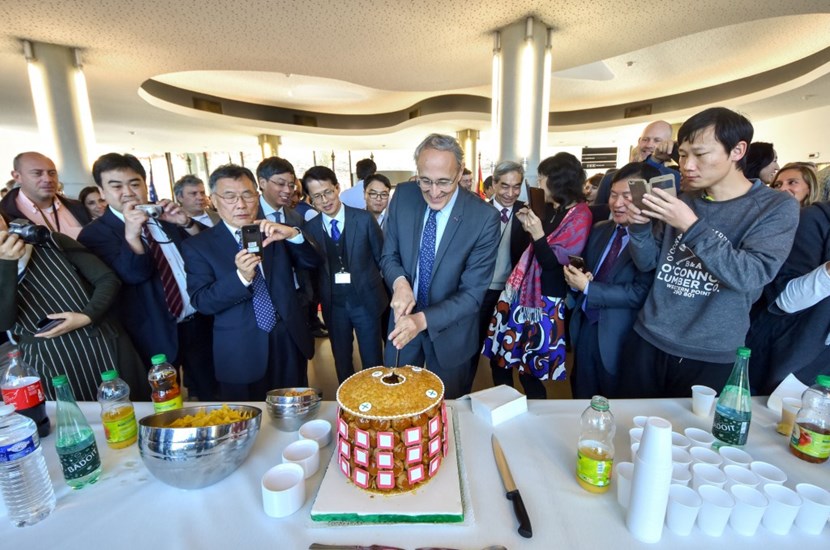 On 15 November, the ITER Community past and present gathered to celebrate the tenth anniversary of the effective establishment of the ITER Organization. A tokamak-shaped cake had been ordered, complete with a sugar-and-almond cryostat lid, cream-filled pastry-puff walls and sugar paste port openings ...
The ratification, or "approval," process by each of the seven Members, each according to its own procedures, was to take another eleven months. On 24 October, the process was complete and the small community that was already at work at the Joint Work Site in Cadarache (France) could rejoice—all 170 of them would soon form the international staff of the ITER Organization.


Last week, as the 21st Council convened at Headquarters and the ITER staff, now more than 800 strong, gathered in the amphitheatre, the ITER community—past and present—celebrated the legal "coming into being" of a project that had been so long in the making. 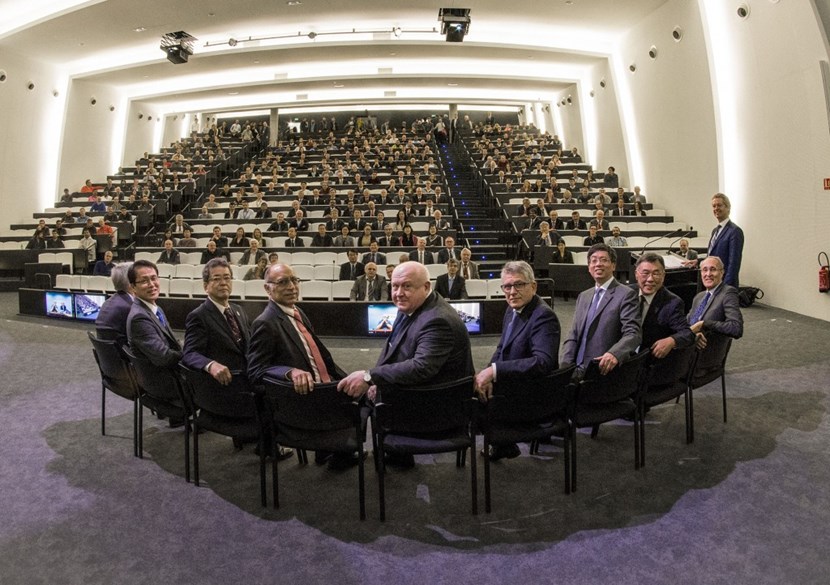 Heads of Delegations to the ITER Council participated in the celebration of the 10th anniversary of the establishment of the ITER Organization. From left to right, seated: Steve Binkley, Acting Director of the Office of Science, US Department of Energy; Wonho Choi, Director General, Space, Nuclear and Big Science Policy Bureau, Ministry of Science and ICT (MSIT), Korea; Yoichi Ito, Deputy Minister of Education, Culture, Sports, Science and Technology (MEXT), Japan; Ravi Bhushan Grover, Member, Atomic Energy Commission Secretary, Atomic Energy Commission and Head, Institutional Collaborations and Programs Division, Department of Atomic Energy, India; Igor Borovkov, Deputy Chief of Staff of the Government Executive Office of the Russian Federation; Gerassimos Thomas, Deputy Director-General, Directorate General Energy, European Commission; Chen Linhao, Deputy Director-General, Department of International Cooperation, Ministry of Science and Technology (MOST), China; Won Namkung, Chair of the ITER Council; and Bernard Bigot, Director-General of the ITER Organization.
As a slideshow flashed in the background—reflecting on the events, major or anecdotal, that had marked the decade—voices from the project's first 10 years rose from the pulpit or from a live connection on the wide screen. Former Council Chairs, members of ITER Organization management, or participants to advisory bodies ... they all voiced their pride at having been part of the prodigious ITER adventure (see their words, below).


And as there can be no anniversary without cake, participants shared a special tokamak-shaped creation, complete with a sugar-and-almond cryostat lid, cream-filled pastry-puff walls, and sugar-paste port openings ...
They said...
Bernard Bigot
Director-General, ITER Organization
"We are standing on the shoulders of the many others who have made the foundations in decades past [...] The story of ITER is much more than its physical components. All of us here are part of a unique human story, the story of immense struggle ... sometimes challenging, sometimes discouraging, sometimes inspirational, but always moving forward."

Won Namkung
Current Chair of the ITER Council
"What impresses me the most is the striking degree of international cooperation and collaboration we have witnessed—and experienced—in the past 10 years. [...] You have earned our gratitude and our respect. And looking forward, we will continue to support you—for the next 10 years and more. Congratulations!" 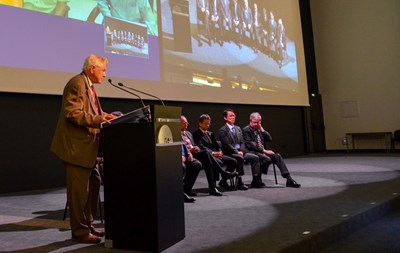 Former Deputy Director-General Valery Chuyanov (2007-2011) chose to retire in a village not far from ITER. ''Progress is appearing every day,'' he said, ''and I am 100 percent sure of the project's final success.''
Chris Llewellyn Smith
Chair of the ITER Council, 2008-2009
"As we all know, there have been huge changes in the energy scene in the last decade. However, the case for building ITER remains as strong as ever. We need to know, once and for all, whether—as I believe to be the case—we can control a burning plasma, and hence whether fusion power will be available as an option for the future."


Evgeny Velikhov
Chair of the ITER Council, 2010-2011
"ITER is a unique project because it is the only one that involves all the leading countries—in fact not only the ITER Members, but also many other countries cooperating with them. Therefore, it is a project that compiles all the works in the field of fusion energy and I would say it is a model for international cooperation."


Hideyuki Takatsu
Chair of the ITER Council, 2012-2013
"Fusion energy ... is the only one possible candidate on the table today which has the potential to solve both global energy security and global warming issues at the same time in this century. The ITER Project is the central element of world fusion program and each party can take due steps towards fusion energy realization when and only when ITER Project fulfils its programmatic goals."


Bob Iotti
Chair of the ITER Council, 2014-2015
"The early years were a struggle, with success not a given ... and maybe even today success is not a given so we have to keep working on that. But I can tell you, for the last two years or three years the progress that the ITER Organization and the Domestic Agencies have made has been nothing short of remarkable." 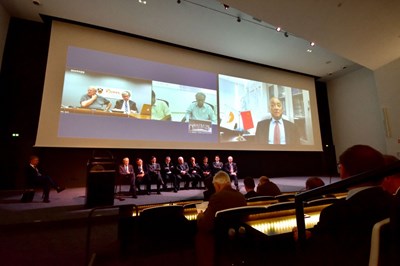 Live from China, Shaoqi Wang, former Deputy Director-General, Department for Administration (2006-2011), stated his hopes that ''with the efforts of all ITER Members we can continue to collaborate closely and realize our common goal of fusion energy.''
Abhijit Sen
Former member of the ITER Council Science and Technology Advisory Committee (STAC) and the International Tokamak Physics Activity (ITPA)
"For India [participation in the project] has been a very synergistic experience where, apart from contributing materially and technically towards building ITER we have also gained in technical and scientific experience that has enriched our own national fusion program. As a late entrant to fusion research, joining ITER has given us just the right platform to lead from our program, to quickly get into the mainstream of tokamak research and to pull in our industries to develop expertise in some of the most high-tech areas and to compete internationally."

Shaoqi Wang
Former Deputy Director-General, Department for Administration (2006-2011)
"Today on the 10-year anniversary, the ITER Project has obtained a lot of achievements. I sincerely hope that with the efforts of all ITER Members we can continue to collaborate closely and realize our common goal of fusion energy. Bon anniversaire à ITER Organization!"


Yong-Hwan Kim
Former Deputy Director-General, Department for Central Engineering & Plant Support (2006-2011)
"When I was at the ITER Organization there was only the Headquarters Building and the poloidal field coils building. I am really glad to see such fantastic progress. I am quite sure that you all can accomplish the project very successfully and give great hope to human beings for future energy."


Rich Hawryluk
Former Deputy Director-General, Department for Administration (2011-2013)
"It is important to realize that we have a unique opportunity in the world to study a burning plasma. This is what motivated the construction of ITER when we cut the ribbon in 2007 and the ITER Organization started. This unique opportunity is as important today as it was then. We'll be able to learn the science and technology of fusion. [...] I think that we all look forward to the day when we begin First Plasma operation and move on subsequently to deuterium-tritium operation and really study the burning plasmas that ITER and only ITER will provide us for years ahead." 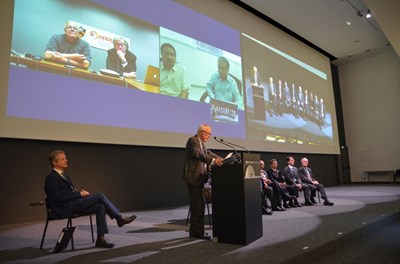 Rem Haange, who was Deputy Director-General and Director, Department for ITER Project from 2011 to 2015, considers that air pollution ''is one very good reason to develop fusion.''
Valery Chuyanov
Former Deputy Director-General, Department for Fusion Science & Technology (2007-2011); former Chief Scientist of the Department of ITER Project (2012)
"ITER construction is a very difficult process; you all know this very well. But progress is appearing every day and I am 100 percent sure of the project's final success. I hope to be here myself ... to see the start of ITER operations."


Hiroshi Matsumoto
Head of the Office of the Director-General (2007-2010)
"We still definitely need stable supply of energy for the baseload. Fusion is still the only ultimate CO2-free baseload supplier which can be supported by most of the people in the world. [...] It will also solve the geopolitical problems arising from uneven distribution of the energy resources in the world. ITER must be a success at any cost."


Rem HAANGE
Deputy Director-General and Director, Department for ITER Project (January 2011-March 2015)
"The air pollution in the industrially developed as well as in many developing countries has drastically increased and is still on the rise [...] For me this is one very good reason to develop fusion, in order to provide the governments of the world with one alternative, possibly in combination with others. Therefore, fusion must be developed up to industrial standard, to provide the choice."


Click here to view a slideshow on the first 10 years in the life of ITER.