How low can you go?

Share Tweet
Cryogenics | How low can you go?
The realm of the extremely cold is fascinating. Temperatures driving toward absolute zero, "steaming" cryogenic liquids and hovering magnets create an air of magic. 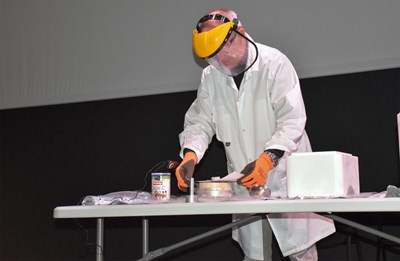 It's not magic in the end, but the Meissner effect that makes a magnet levitate above superconducting material. Denis Henry passes a sheet of paper under the hovering magnet to illustrate the effect of cryogenic temperatures on the material.
The word "cryogenic" is Greek and roughly translates to mean "to generate cold." At a recent in-house technology lecture, David Grillot, head of ITER's Cryogenic Project Team and introduced as the "coolest guy" at ITER, took his audience on a journey into the world of the ultra-chilled.
In common household refrigerators temperatures are normally around 5 °C. In a freezer they go down to -18 °C. Cryogenics begins at temperatures lower than -153 °C (120 K) because it is below this point that the first of the cryogenic fluids begin to liquefy. The bottom limit is of course absolute zero: 0 K or -273 °C—the point at which all particle motion stops.
The age of cryogenics began toward the end of the 19th century, when scientists managed to liquefy air for the first time. Following the successful liquefaction of oxygen, nitrogen, hydrogen and argon, helium entered the stage in 1908 as the last of the cryogenic gases. The first droplets were produced at a temperature of 4 K, establishing helium as the coldest liquid in existence.


Since the middle of the 20th century, the field of cryogenics has advanced to such an extent that its applications today can be found everywhere—in the energy, food, health and space industries, and throughout science research.


What makes cryogenics so interesting for scientists and engineers is the effect of cryogenic temperatures on the thermal, mechanical and electrical properties of materials. Grillot's team members Marie Cursan and Denis Henry demonstrated, for example, the loss of ductility in a length of rubber, breaking a newly rigid section with relative ease after they had dunked it in liquid nitrogen. 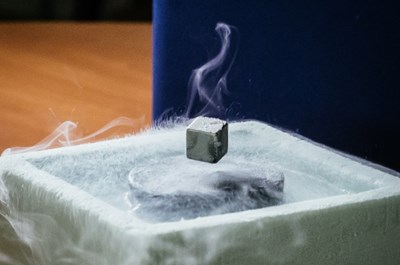 
In ITER, cryogenic technologies are omnipresent; they are crucial to create the extremely low temperatures needed to run key components of the machine. The main "ITER clients" of cryogenics, as Grillot explained during the presentation, are the superconducting magnets, the cryopumping system and the thermal shield.


The superconducting magnets will be cooled down with helium to 4 K (-269 °C), at which point their electrical resistance drops to zero, allowing them to carry large amounts of electrical current without losing energy. The cryopumping system provides the high-quality vacuum for the cryostat and the vacuum vessel; it further reduces the pressure inside the vessel after mechanical pumps have evacuated most air molecules and impurities. The thermal shield, cooled with gaseous helium to -193 °C (80 K), separates the ultra-hot centre of the plasma chamber from the superconducting magnets.


For more information on the role of cryogenics in ITER see the page on the cryoplant.