US ITER and General Atomics

Share Tweet
Central solenoid | All conductor received
Officials from the US and Japanese fusion energy programs were at General Atomics' Magnet Technologies Center in California in early May to celebrate the delivery of the final spool of central solenoid conductor. 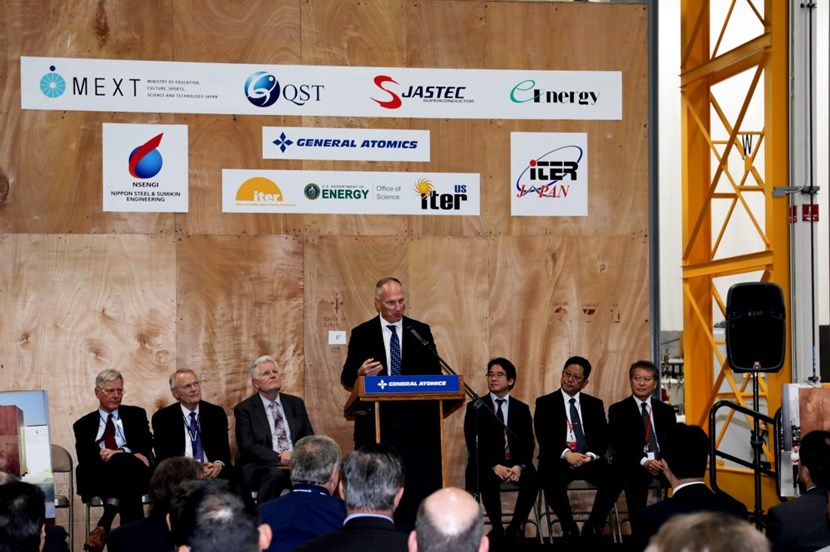 John Smith, manager for General Atomics of the ITER central solenoid project, speaks at an event marking the delivery of the final spool of conductor to the central solenoid facility near San Diego. Photo: GA
The ITER central solenoid—five stories, 1,000 tonnes—will be the largest pulsed superconducting magnet in the world. From its position at the centre of the ITER machine it will drive more than 15 million amperes of current in the plasma, contributing to maintaining long plasma pulses and to shaping the plasma.


On 3 May, a ceremony was held to mark the delivery by Japan of the 51st and final spool of niobium-tin conductor—the material that General Atomics is using to fabricate the ITER central solenoid.


"This is an event worth celebrating, as we now have all of the superconductor needed to complete the ITER central solenoid modules," said John Smith, who manages the central solenoid manufacturing program for General Atomics. "Japan's QST and industrial partners were able to manufacture and deliver more than 25 miles [43 kilometres] of this precisely manufactured conductor, which is no small feat."
The US is responsible for central solenoid fabrication and assembly—scope which includes design, R&D, module fabrication (from conductor supplied by Japan), associated structure fabrication, assembly tooling, bus extensions, and cooling connections.
Japan's National Institutes for Quantum and Radiological Science and Technology (QST)—which is overseeing the procurement of ITER components allocated to Japan—has been responsible for the procurement of all central solenoid conductor, including spares.


Manufacture of the conductor involved more than 150 employees working for over five years at multiple companies in Japan and Korea. The strand and cable was manufactured by Japan Superconductor Technology, Furukawa Electric and Kiswire Advanced Technology with e-Energy and the stainless steel jacket was made by KOBELCO Steel Tube. Nippon Steel and Sumikin Engineering then combined the cable and jacket into the conductor that was delivered to General Atomics.


To transform the conductor, General Atomics has developed an innovative winding process that coils approximately 5 kilometres of conductor into a central solenoid module. Each module is made up of 40 layers of conductor with 14 turns in each layer. Six of the 110-tonne modules will be stacked into an 18-metre-tall assembly, with a seventh module serving as a spare. Once wound, each module goes through a five-week heating process in which the modules are heated to 650 °C in a convection oven to convert the niobium-tin wire into the superconducting material. General Atomics currently has five modules in different states of fabrication.