Share Tweet
Open Door Day | Let's play with plasma
Humans are visual creatures. By offering a number of highly visual table top experiments, the Fusion Road Show illustrated that "seeing is believing" when it had its debut at ITER's Open Doors Day, explaining the fundamental aspects of fusion to curious visitors. 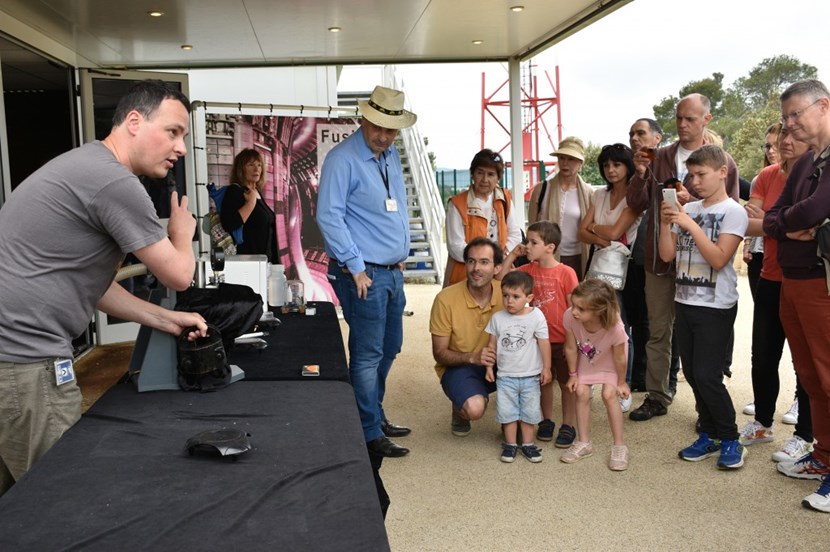 DIFFER's Gieljan de Vries had the audience at his fingertips when illustrating basic principles of the functioning of a fusion reactor with tabletop experiments.
On a table behind ITER's Visitors Centre, a bright glow starts up inside a household microwave oven. "What you see here is not fire," explains Gieljan de Vries from the Dutch Institute for Fundamental Energy Research (DIFFER) to the small crowd that has assembled. "The glow comes from a hot gas, a plasma."


De Vries created the plasma by putting burning toothpicks under a laboratory beaker and heating the air inside the beaker with microwaves for about 15 seconds. With this simple set-up, he explained the fundamentals of plasma, the fourth state of matter, as the environment that hosts fusion reactions. He also illustrated the efficiency of microwaves in their capacity to heat a plasma—one of the essential mechanisms ITER will use to reach the temperatures necessary for fusion reactions to take place. 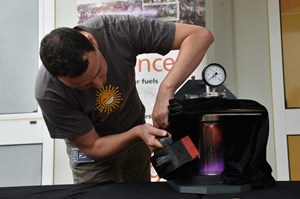 The masterpiece: de Vries demonstrates how to manipulate the shape and spatial position of a plasma with a magnet.
The experiment is part of the Fusion Road Show, an entertaining yet educational theatrical show which was developed by DIFFER to increase awareness about nuclear fusion and its potential to create clean, safe and abundant energy for future generations. Visitors at ITER's Open Doors Day saw a custom-made version of the Road Show, which highlights some of the key principles behind the functioning of a fusion reactor—the creation and heating of a plasma, and its magnetic confinement.


De Vries went on to demonstrate the principle of magnetic confinement as a method to keep a hot plasma from touching the walls of the surrounding chamber. With impressive dexterity, he twirled a magnetic spinning top above a magnetic base. As if by magic, the spinning top levitated in the air and, briefly, kept spinning. With this relatively simple illustration of magnetic forces de Vries had the audience at his fingertips and ready for the final show piece.

Spreading the word about fusion

In the nearly twenty years of its existence, the DIFFER Fusion Road Show has reached tens of thousands of people—mostly students at high schools and universities—with its educational message about nuclear fusion as a potential future energy source. Gieljan de Vries, a science communicator with a physics background, is using the Fusion Road Show not solely as an instrument of information. The show's aim is also to engage with the audience in a wider dialogue about the future of energy and energy research.

Six hundred volts of electrical power were applied to a clear quartz tube, from which the air had been pumped out to create a low-density environment. The result was immediately visible to onlookers as the gas inside ionized and a purple plasma sprang up. But that was not the final attraction. Holding a large horseshoe-shaped magnet close to the tube, de Vries demonstrated how a plasma can be magnetically manipulated in space. In the tube, the reaction of the plasma to the magnet was clearly visible: it changed colour to an orange hue, and its position shifted in the tube.


For the audience, the compact Fusion Road Show proved to be a perfect fusion crash course, preparing them for their tour of the ITER worksite. Armed with a wealth of information about the ITER Project and the visual impressions of the show, visitors then went to see for themselves where the full-size fusion experiment will take place.