Share Tweet
Art and science | Seeking new perspectives on fusion
Standing in the middle of the Tokamak Building, sound artist Julian Weaver positions his 3D microphone near one of the openings of the bioshield to record the soundscape created by the activities below. Just a few metres away his associate, researcher Jol Thomson, captures the corresponding visuals ... 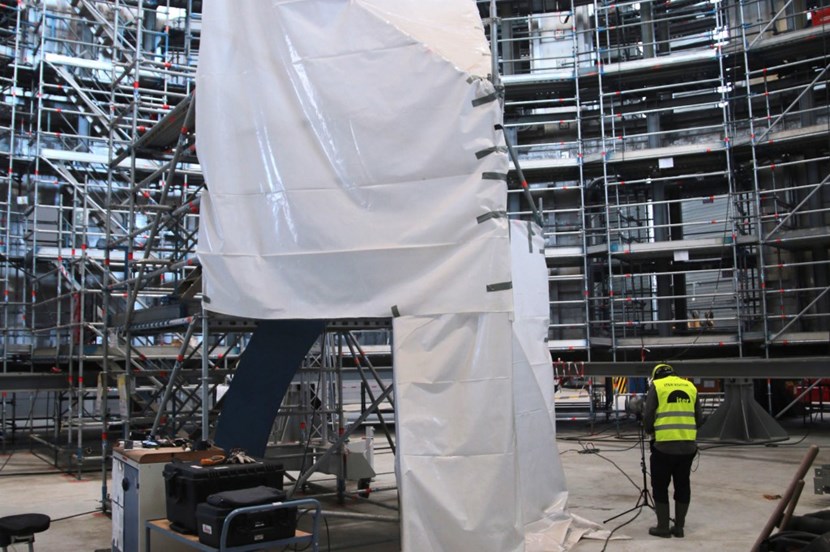 Sound artist Julian Weaver records the soundscape in the lower cylinder of the cryostat with a 3D microphone for his project ''In the future perfect,'' a multidisciplinary approach to exploring the impact of fusion on society, economy and the environment.
Weaver and Thomson were on site late in June as part of a project called In The Future Perfect—one of five commissions from the London-based Royal Holloway Centre for the GeoHumanities¹ under the overall theme "Creating Earth Futures."


Traditionally, art and science have been two different ways for humans to understand the world and communicate that understanding. Weaver and Thomson aim at a multidimensional understanding of what clean and unlimited fusion energy could mean for the future of society, the economy and the global environment. Going beyond the boundaries of science, they employ methods drawn from the humanities and the arts to arrive at new insights.


"We hoped to capture in video and sound some of the atmosphere and energy of the site as it is taking shape," said Weaver.


During their tour at ITER, Weaver and Thomson gained first-hand impressions of the large ring-shaped magnets, the elaborate structure of the cryostat, and the complexity of construction—recording sights and sounds all along the way. They also had the opportunity to follow up with physicists on issues related to plasma physics and fusion science, in particular on the material and physical limits of fusion.


For Weaver and Thomson, the visit paid off. "Speaking intimately with physicists and experiencing the density of detail in the immense construction of the tokamak and the cryostat on site has definitely reoriented our perspectives on a fusion future as well as the inherent question of social responsibility in the age of climate change."


Projects like In the Future Perfect will draw new audiences into the world of fusion.


¹ GeoHumanities is an interdisciplinary field that allows creative interaction between the sciences, the humanities and the arts to develop the knowledge needed to face today's global challenges.