Share Tweet
SOFT 2018 | Conference opens in antique setting
The ancient theatre of Taormina, in northeast Sicily, was built by the Romans on the foundations of an earlier Greek theatre. Still used to this day, the round structure normally resonates with the sound of opera or other performances. On Sunday 16 September, however, the historic monument provided a magnificent setting for quite a different event—the opening of the 30th Symposium of Fusion Technology (SOFT), the largest fusion technology conference in Europe. 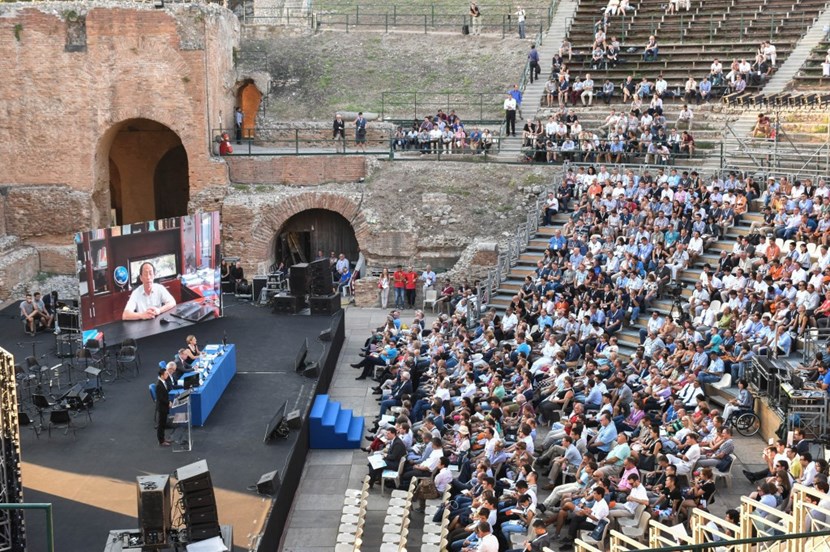 A bridge between the ancient world and a future we are writing today: the ancient theatre of Taormina, in northeast Sicily, was the spectacular backdrop for the opening ceremony for the 30th Symposium on Fusion Technology, organized this year by the Italian National Agency ENEA.
This year's gathering was organized by the Italian National Agency for New Technologies, Energy and Sustainable Economic Development, ENEA. With close to 1,000 participants and more than 1,000 contributions it is looking to be a record-setting year in the history of the symposium. For conference chair Aldo Pizzuto from ENEA, these numbers—along with the ever-increasing participation of young researchers and the consolidated representation of industry representatives—illustrate the importance of SOFT as a platform for exchange on recent progress in fusion research and technology.


ITER Director-General Bernard Bigot opened his keynote speech by expressing his admiration for the Greek and Roman engineers who built the ancient theatre of Taormina and then drew a parallel with ITER.  "They divided the amphitheatre into nine sectors to accommodate 5,000 spectators," he noticed, and drew a parallel to the nine sectors of the ITER vacuum vessel—five of which will be manufactured and delivered by Italy.


The ITER Director-General then presented an update on recent developments in the manufacturing of ITER components and in the building of the ITER scientific facility since the last SOFT conference in 2016. The audience was visibly drawn in by information on recent achievements such as the completion of the concrete wall that will completely surround the machine (the bioshield), the installation of 600 tonnes of tanks in the Tokamak Complex, progress on the ITER cryostat, and spectacular photos of work in the Assembly Hall or cryoplant. 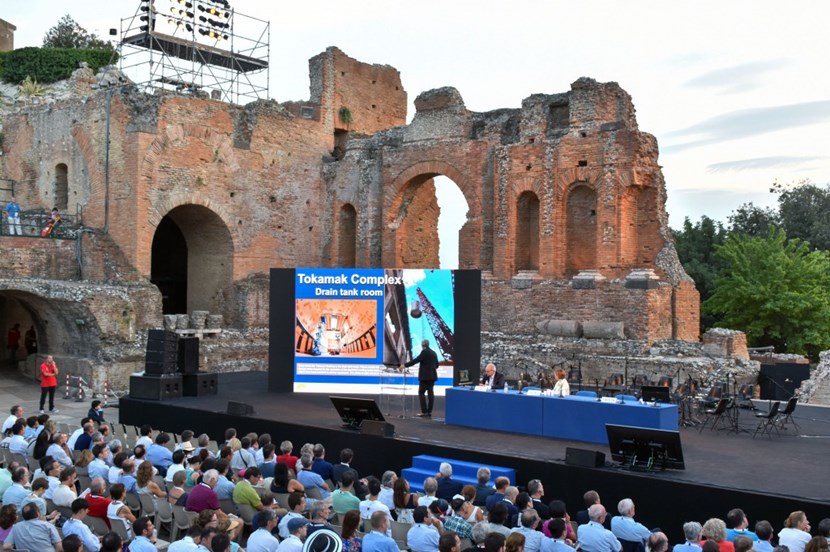 The ITER Director-General delivers a keynote speech on Sunday 16 September. With 1,000 participants and more than 1,000 contributions, this year's SOFT confirms the symposium's position as a highly anticipated event in the fusion community calendar.
Asked what needed to be done to ensure the continuity of the project, Bernard Bigot stressed the importance of preparing the best scientists and engineers for the operation of ITER. "We need to motivate young people to become the next generation of fusion experts by giving them the flavour of fusion," he advised. He shared the enjoyment he felt during weekly Skype conversations with the young fusion aficionados who contacted him.


The opening ceremony also provided the stage to award the 2018 European Prize for Innovation in Fusion (the "SOFT Innovation Prize"). Established by the European Commission in 2014, the prize is to reward outstanding researchers or industries who try to find new solutions to the huge challenges of fusion—solutions that can possibly have wider spin-off applications  that can benefit society today.

At the end of the opening ceremony, the ancient theatre returned to cultural performance function, entertaining conference participants with music by Italian composers performed by the Plectrum Orchestra of Taormina.

SOFT continues through 21 September. More at this address.