Smallest crane gets a lift

Share Tweet
Tokamak Building | Smallest crane gets a lift
Towering 50 metres above ground, "C1" is the shortest of the five tower cranes operating inside the Tokamak Complex. Standing at the very centre of the bioshield—almost exactly materializing the axis of the ITER machine—it is the one we point to when we have visitors on the worksite. 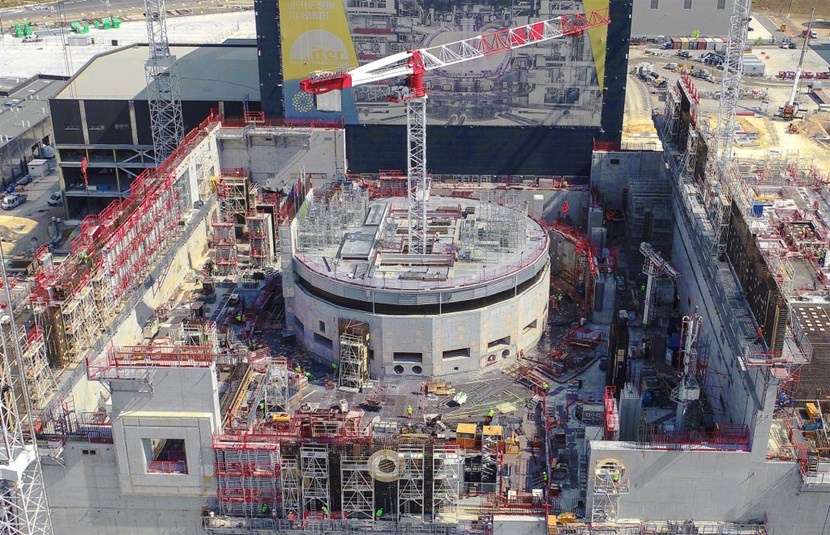 The C1 crane, which delivers materials all around the Tokamak Building from its position in the middle of the bioshield, is about to grow 10 metres.
Like its taller sisters, C1 was installed in 2014. Its first mission was to deliver rebar, formwork and all the necessary materials for the construction of the bioshield. Then, the (relatively) short crane was meant to pursue its material-delivery role as the concrete slabs and walls of the Tokamak Building were filled one after the other all around the central machine pit.


In the latest, optimized version of the building plan, however, some of the activity sequences have been modified. The C1 crane will have to be operational at level 5 of the Tokamak Building before level 4 is completely finalized, which requires extending the C1 crane by approximately 10 metres. 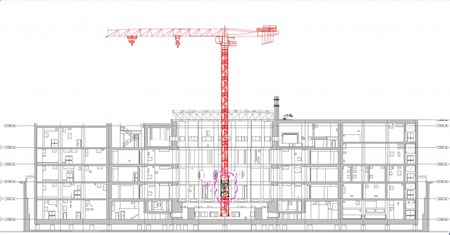 Smack in the centre: the C1 crane is often used to visualize the axis of the ITER machine. This cutaway shows the inner partitioning of the Tritium, Tokamak and Diagnostics buildings (from left to right).
"Cranes are like Lego," explains Laurent Moustraire, the "master of cranes" for the European VFR consortium responsible for building the Tokamak Complex and eight other buildings on site. "Within limits, they can be modified almost at will." In the context of the new phasing, C1's mast will be extended approximately 10 metres, allowing the boom to operate well above the upper level walls.


A crane's specifications are determined by the "wind effect"—the forces that are exerted by the wind swirling between the different structures of the construction site. Wind effects are calculated through modellization and, just like for fighter jets, mockups of the cranes are tested in wind tunnels before being commissioned (see video).


"Before choosing and installing the worksite cranes in 2014, we worked for a full year with the French Scientific and Technical Centre for Construction (CSTB) to analyze and modellize the wind effects in the different locations where the cranes were to be installed," adds Antoine Tardy, VFR's chief methods engineer. 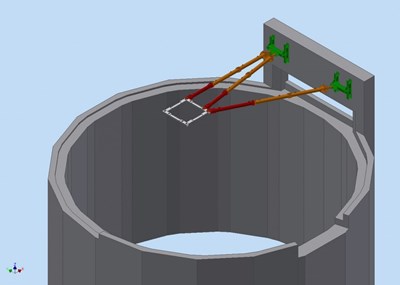 Three steel tubes will anchor the crane mast against the concrete wall above the bioshield in order to counter the increased wind effect that has been forecasted through modellization.
A similar procedure was followed for the extension of crane C1. As the wind effect will be greatly increased in the new, taller configuration, it was determined that the mast needed to be reinforced at its base and that extra anchorage had to be created. To this end a set of three steel tubes (Ø 40 cm) will be bolted to one of the heavy concrete walls that stands above the bioshield as shown in the diagram at left.


For a few days, we won't be able to point to crane C1 to explain where the machine's axis will be located. Operations began late September and it will take five to six days to dismantle the crane, add the extension, and create the anchorage.


But C1 will stand again, taller and sturdier like a beacon for the future ITER Tokamak.