Share Tweet
Fusion electricity | Navigating Europe's course
Since 2013, the European Roadmap to Fusion Energy has been the fundamental document guiding European priorities in fusion R&D until the ultimate goal—achieving electricity from fusion energy. On the occasion of the release of version 2.0, Newsline asked EUROfusion Programme Manager Tony Donné about the updated document, the role of ITER, and the overall outlook for fusion energy. 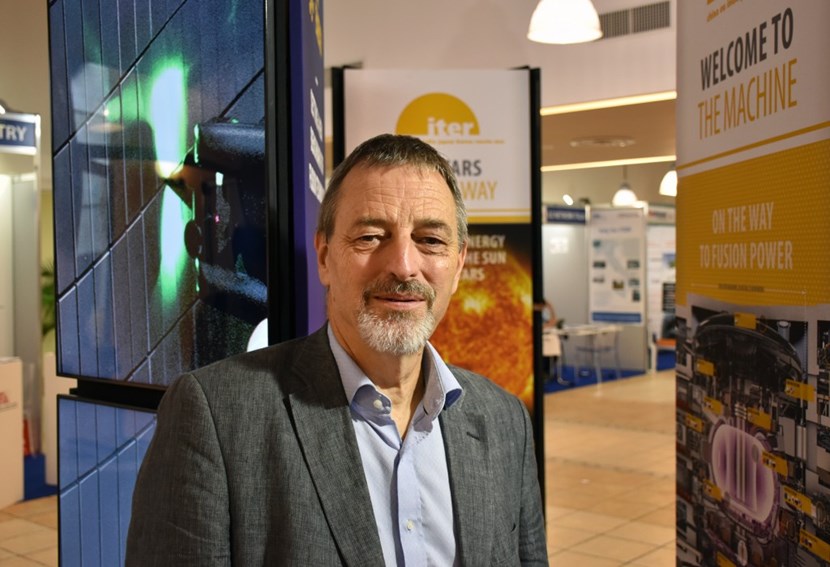 Tony Donné presented the new European Roadmap to Fusion Energy at the recent 30th Symposium on Fusion Technology (SOFT). The largest gathering of fusion experts in Europe provided the perfect stage for the launch.
What is the rationale behind the new Roadmap?
I always compare the Roadmap with a navigation system. You program your destination and the navigation system finds you the fastest route. Along the way, it takes account of the traffic situation and road conditions and adjusts the route accordingly to get you to your destination as fast as possible. But sometimes there are new roads and highways and you need an update of your navigation system.


Now, six years after the introduction of the roadmap in 2012 we see developments which are really good news for fusion. These were taken into account in the update of the Roadmap. The difference between a navigation system and the fusion roadmap is that the latter is dealing with completely uncharted territory.


What are the new elements of the Fusion Roadmap?
The European Fusion Roadmap outlines the research and development required to provide the basis for an electricity-generating fusion power plant. This new version is an evolution, not a revolution. In the first Roadmap we took DEMO (the DEMOnstration power plant) as the end point. We were—and still are—aiming at having electricity from fusion as fast as possible. But we didn't look at how we would get from DEMO to a commercial fusion power plant. Now, the design for DEMO will already include the requirements for a future fusion power plant to ensure an easy adaption.


The other new element is that the eight roadmap missions are much more interwoven. An example is the stellarator program, mission 8, which will give important input for the development of the heat exhaust, mission 2. Solving this challenge will be very helpful for both ITER and DEMO.


The roadmap 2.0 also reflects changes in the ITER Baseline which was renewed about two years ago. We needed to adapt for that as ITER is central to the Roadmap. The revised version is therefore fully aligned with the latest ITER Baseline and Research Plan.


How is the central role of ITER reflected in the document?
ITER is the central device and roughly 60-65 percent of the present EUROfusion budget is dedicated to research supporting ITER. Most of the campaigns at the European fusion devices are aimed at supporting the ITER Project. At JET, for example, we are conducting specific ITER-relevant tests like the upcoming deuterium-tritium campaign, the shattered pellet injection testing, and the helium campaign. All of these research activities are part of the Roadmap and contribute to the ITER Project. But also, EUROfusion work at the various national devices is strongly focused on research questions in support of ITER.


Mission 6 is to develop an integrated design for DEMO in Europe. What is EUROfusion's specific role?
DEMO will demonstrate first electricity production to the grid by fusion. The responsibility for the European DEMO lies in essence with Fusion for Energy (F4E), the European Domestic Agency. However, with ITER being the top priority for F4E in the next decade, EUROfusion has been asked to develop the design for DEMO. Taking on this task, we realized that we will have to involve industry from the beginning. Based on experience from various large engineering projects, we believe that the involvement of industry in the pre-conceptual and conceptual design phases will be very advantageous.


The first Roadmap stopped with DEMO, the demonstration power plant after ITER. The new version goes further ...
An important new element is the involvement of our stakeholders. We have created a stakeholder group with representatives from electricity plants, grid operators as well as representatives from the nuclear and nuclear waste industries. Before fusion energy comes on the market we need to identify the most useful way for fusion power plants to deliver energy for conversion to electricity. We develop this input with our stakeholders to define the requirements for DEMO—it's like a retro-planner for fusion energy.


The quest for fusion energy is a global endeavour—does the cooperation foreseen in the Roadmap go beyond Europe?
The collaboration has to be global as the development of fusion energy is of global importance. And it is a big challenge, so we all need to work together to achieve this goal of producing energy from fusion. Naturally, our work with ITER is international in the sense that we collaborate with all ITER Members.


Our cooperation within Europe and beyond is embedded in the Roadmap. There is intense international scientific collaboration in various fields in order to be efficient in driving scientific discovery and avoiding duplication. At the moment, the most extensive collaboration is with Japan on the Broader Approach which includes research activities on key physics questions using the fusion device JT-60SA or the work of IFMIF (the International Fusion Materials Irradiation Facility) on fusion materials. There is a lot of interaction worldwide in many fields involving all ITER Members, but also others such as Brazil, Kazakhstan and Australia.


What is your view on the role fusion energy in the future energy mix?
The question really is: do we need fusion electricity? To answer that question I use the example of Germany which is currently subsidizing wind and solar energy concepts with about EUR 25 billion per year. That is roughly equivalent to building one ITER per year. Last year Germany managed to cover 37 percent of its energy consumption from renewables, mostly wind and solar. But, at the same time CO2 emissions from electricity production didn't decrease as fossil fuels such as peat are still being used for the base load.


Renewable energy sources have their limitations and even with efficient energy storage facilities we still would need large scale back-up energy sources. This is where fusion can play a vital role by replacing fossil fuels as the base load and contribute to reducing CO2 emissions. Fusion does not compete with other renewables; I believe that there is good place for fusion in the energy mix of the future.