Share Tweet
Steady at the helm | Bernard Bigot accepts a second term
In a unanimous decision, the ITER Council has voted to reappoint Dr Bernard Bigot to a second five-year term as Director-General of the ITER Organization. The Council decision centred on two factors: the strong performance of the project in recent years under Dr Bigot's leadership, and the complex challenges that lie ahead as construction ends, massive tokamak components arrive on site, and the stringent, carefully sequenced assembly and installation schedule kicks off in 2020. 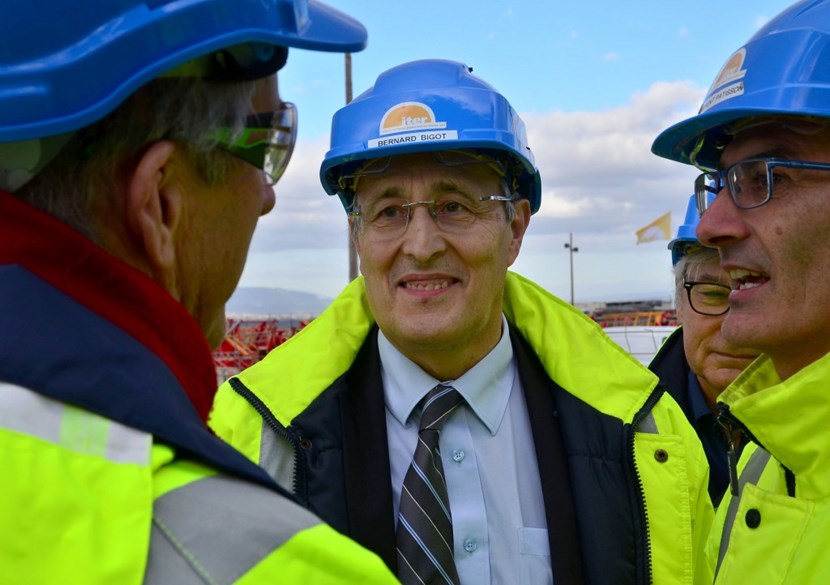 Director-General Bigot's re-appointment ensures continuity as the project enters a demanding and high-stakes phase: machine assembly.
Stakeholders internal and external have welcomed the announcement as a signal from both the Council and Bigot himself of the intent to ensure reliability and continuity for the demanding days that lie ahead.


In 2013, two years before Dr Bigot took the helm of the ITER Project, a report from the biennial Management Assessment had issued a warning: change course or risk project failure. By March 2015, the project was clearly at risk. The staggering complexity of the machine itself—compounded by the intricate international Procurement Arrangements under which companies on three continents would fabricate ITER's first-of-a-kind components—was taking its toll.


The rigour with which the new Director-General set about organizational reform showed that he understood both the high stakes involved and the structural changes needed. The central dilemma was daunting: how to ramp up the pace of construction and manufacturing at the same time as the project was undergoing exhaustive internal and external reviews of ITER's design, engineering, schedule, and cost—and all the while driving a revolution in project culture.

Nearly four years of progress on the ITER worksite (February 2015, November 2018).
The results have been significant. Physical progress on every front has been matched by renewed optimism across the project. Once-sceptical stakeholders have been reassured. The project recently reached 60% completion through First Plasma in 2025.


Success, however, is not a one-man feat. Dr Bigot frequently reiterates the importance of teamwork and individual accountability at all levels. In his message last week to ITER staff and the seven ITER Members, announcing his acceptance of a second term, he set a familiar tone: "... the most important person for the success of the ITER Project is not the ITER Organization Director-General, but each of you, each of the stakeholders, each of our contractors and suppliers, each of us."


Read the press release in English or French.