A pinch of moondust in the ITER plasma

Share Tweet
Heating | A pinch of moondust in the ITER plasma
One day in the distant future, fusion plants might be fuelled by helium 3—an isotope that is extremely scarce on Earth but reputed to be abundant on the Moon. But long before the advent of helium 3 fusion¹ (if ever it is achievable) this rare element will play a role in heating the ITER plasma. In the initial stage of ion cyclotron resonance heating, a pinch of helium 3 will be puffed into the vacuum vessel to boost the efficiency of the system. 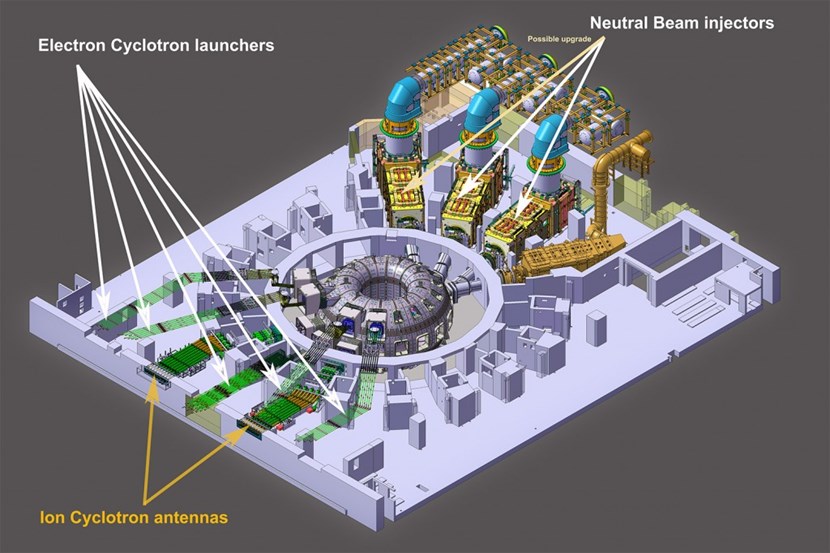 
By generating waves at a frequency that matches the oscillation of the ions perpendicular to the magnetic lines (the "cyclotron" frequency) ICRH waves resonate with plasma ions, which leads to energy transfer from the radio waves to the plasma. And of course "transfer of energy" is a scientist's way of saying "heating" ...


"Generally speaking, fundamental heating has a better absorption efficiency than second harmonic heating at low plasma temperatures, i.e., for conditions characteristic of the start-up phase in an ITER plasma," explains Mireille Schneider, a physicist in the ITER Confinement & Modelling Section. "But due to the properties of ion cyclotron waves, fundamental heating works on a minority ion population and not on the majority bulk ion population of the plasma."

When the cyclotron frequency of the majority ions is half that of the minority, the same ICRH wave frequency resonates with both species and operators can briefly use fundamental minority heating as a "starter" to bring the majority to a temperature level that allows second harmonic heating to take over.


This is where helium 3 enters stage—its cyclotron frequency happens to be exactly twice that of tritium, making it the perfect starter ion for ICRH heating in a deuterium-tritium plasma. (See box.)


"The ITER ion cyclotron antennas have a frequency range of 40 to 55 MHz," explains Mireille. "When we tune them to about 53 MHz, the frequency corresponds to the fundamental resonance of helium 3 and also to the second harmonic resonance of tritium."


In the initial stage of ICRH heating, the radiofrequency waves can efficiently heat the minority helium 3 ions through fundamental heating, which in turn start to heat the majority tritium ions through collisions. Although not a direct "target" of ICRH heating, deuterium ions are caught in the high-speed billiard game that ensues and their energy level (their temperature) rises parallel to that of the tritium ions.


As the tritium ions become hotter, second harmonic ion cyclotron heating becomes more efficient. After a few seconds, the energy can directly be transferred from the ICRH radio waves to the tritium ions (and hence to their deuterium counterparts) through collisions, and the puffing of helium 3 into the plasma can be stopped. 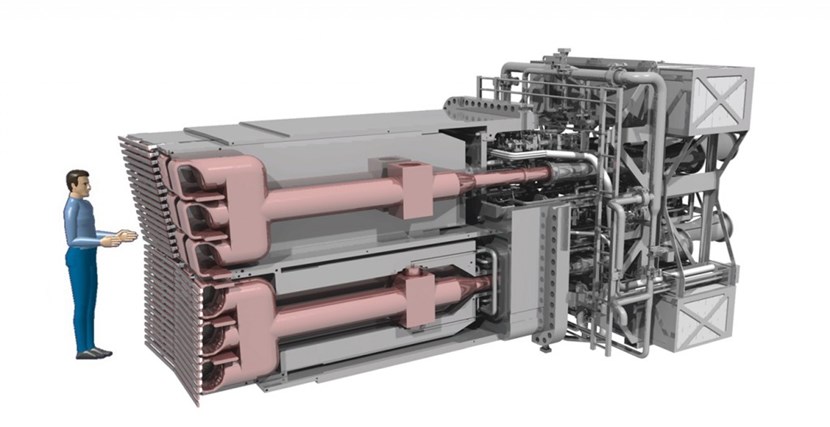 ICRH antennas are massive components designed to deliver radiofrequency waves to the plasma.
Which is fortunate for the economics of fusion. Helium 3—used in minute quantities for cryogenic applications, neutron radiation detection and medical resonance imaging—is as rare as it is expensive ...


What percentage of helium 3 will be needed to optimize ICRH heating and how long it will need to be puffed into the plasma are still open questions. "The ITER Science Division is working on different models and scenarios and so is the fusion community as a whole, particularly through the International Tokamak Physics Activity (ITPA)," explains Mireille. "As of today, we don't have all the answers but we can reasonably estimate that we'll need to puff a few percent of helium 3 for ten seconds or less ..."


In many ways, fusion is still a science in the making. And it is only through ITER operation that long-sought answers will eventually be provided.


¹ - Helium 3 (³He) can fuse with deuterium and also with itself. The ³He+D reaction occurs at temperatures in the one billion degree range and—contrary to deuterium + tritium fusion—only releases charged particles. In principle this means that no neutron flux will activate and alter the chamber walls. In reality, the ³He+D reaction does release some neutrons, since part of the deuterium in the plasma will inevitably fuse with itself. The ³He+³He reaction, which occurs at even higher temperatures, presents better prospects; its energy yield (12.9 MeV) is still high and it releases no neutrons. Both reactions unfortunately come with a slight technicality: the crust of the Moon is the closest place where ³He can be procured in significant quantities ...