Share Tweet
A "magic moment" | Cryostat 60% complete
When a seafaring vessel is launched, naval tradition requires that a bottle be broken on its hull to invite good luck. Although the ITER cryostat will never take to the sea, it is indeed a vessel—and a most spectacular one at that. 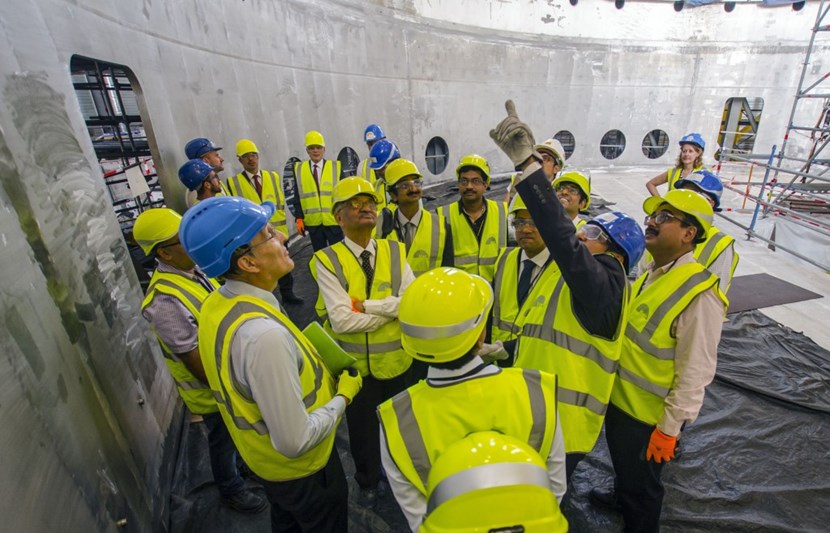 ITER Cryostat Group Leader Anil Bhardwaj gives a tour of the recently finalized base section. The 1,250-tonne cryostat base will be the first machine component to be lowered into the assembly pit in March 2020.
In the Cryostat Workshop, where the India-procured component is assembled and welded, ITER Director-General Bernard Bigot, India's Ambassador to France Vinay Mohan Kwatra, and the former chairman of the Atomic Energy Commission of India, Anil Kakodkar, symbolically smashed a bottle of French champagne on a large chunk of steel representing the ITER cryostat.


The ceremony marked an important milestone in the fabrication of this strategic component: two sections—the base and lower cylinder—are now completed and fully accepted by the ITER Organization, the upper cylinder is being assembled and aligned prior to welding, and half a world away, in the manufacturer's facility, the last segment of the "top lid" is being finalized.


The ITER cryostat is essential to the ITER machine, providing structural support and also acting as a thermos to insulate the Tokamak's magnetic system, at cryogenic temperature, from the warmth of the outside environment.


It is the largest vacuum vessel ever built—30 metres high, 30 metres in diameter, for a pump volume of 8,500 cubic metres. It is also a highly complex structure which must remain absolutely leak tight despite hundreds of "penetrations" that give passage to thousands of feedthroughs and lines for cryogenics, water, electrical power, diagnostics systems, and more.


In his address to the assembled guests, ITER Director-General Bernard Bigot retraced the "formidable technological, industrial and human venture" that the manufacturing of such a unique object represents. "Designing, manufacturing, delivering, assembling and welding this one-of-a kind component has proved a huge challenge for everyone involved."


And everyone involved was there, either in person or through video conference from India: the ITER cryostat team; representatives of ITER India, which is responsible for the procurement of the cryostat; industrial giant Larsen & Toubro Ltd, in charge of forging and machining the elements of the cryostat at its Hazira facility and assembling them on site; and finally the German company MAN Energy Solutions, subcontractor to Larsen & Toubro for on-site welding. 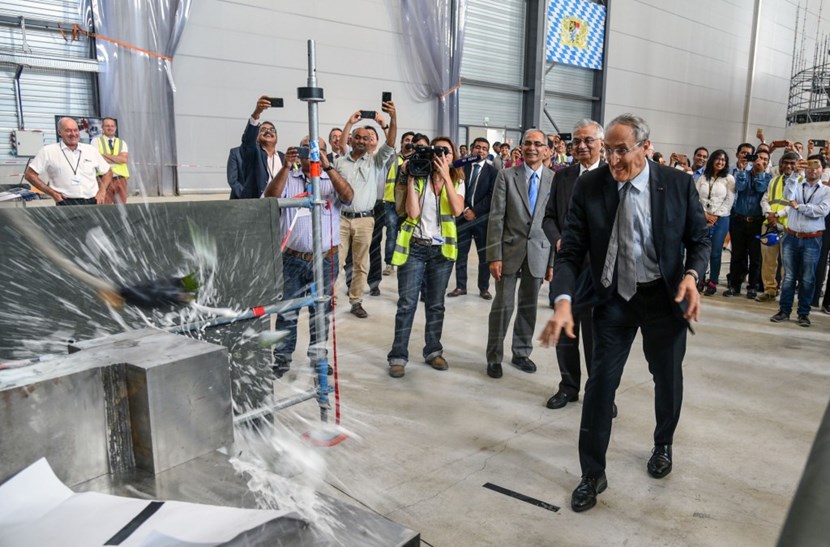 The naval tradition of smashing a bottle of champagne on the hull of a seafaring vessel exceptionally (and temporarily) replaced the Indian ''coconut breaking'' ceremony that the Cryostat Workshop has often witnessed.
The fabrication of the ITER cryostat, said Vinay Mohan Kwatra, Indian Ambassador to France, represents "a major achievement for Indian manufacturing—whose capabilities are not always acknowledged as they should be." The Ambassador also stressed the unique nature of ITER, a project that is "not for the benefit of one partner or one country, but for the whole of humankind."


For Ujjwal Baruah, who recently succeeded Shishir Deshpande as Head of ITER India, the ceremony was "a magic moment," the culmination of a "long march" which began in 2012 with the signature of the Cryostat Procurement Arrangement with the ITER Organization.


"Through the innumerable challenges we have faced in the manufacturing of the ITER cryostat, we have learned and grown at every step," said Larsen & Toubro Heavy Engineering Joint General Manager Praveen Bhatt, speaking on behalf of the company's Senior Vice-President Y. S. Trivedi.


This "learning process" was also stressed by Rolf Bank, MAN Energy Solutions Head of Site for Deggendorf. The assembly and welding of the cryostat, he said, has made his company take "big steps forward in a whole new area of expertise."


In his opening address, ITER Director-General Bernard Bigot had resituated the fabrication of the cryostat in the broader picture of the ITER Project, which he characterized as "men and women working to the best of their ability in different parts of the world to achieve an utterly ambitious and difficult task—one that is essential for the future of our civilization."


Anil Kakodkar's keynote speech developed along the same lines. For the "father" of the Indian nuclear program, ITER "is our hope for the energy freedom of the world at large and for the development of the large part of humanity that is still undeveloped." The massive international effort that ITER represents is also "the new paradigm that humanity is desperately looking for."


One of the most respected scientific and moral figures in his country, the former chairman of the Indian Atomic Energy Commission and former Secretary to the Indian Government hailed "the stupendous task in which you are engaged." But as he touched on climate change, he also warned: "Fusion must be available before the world reaches the cliff's edge."


Watch a video of the event here.


For more information about the ITER cryostat, see this page on the ITER website.

The best view in the house

Between the upper cylinder (under construction, background) and the base, there was just enough room to hold a small ceremony in the Cryostat Workshop. In the background, some of the welders from the MAN Energy Solutions (contractor to Larsen & Toubro) watches from high up in the scaffolding.

The hands-on team from Larsen & Toubro

Over its 80 years of existence, Larsen & Toubro Ltd. has built solar and nuclear plants, ports and airports, supertankers and submarines and played a key role is putting into Mars orbit the Mangalyaan space probe. Still, there are challenges in the fabrication of the ITER cryostat that the company had never faced. This young team is at the centre of the cryostat project, including Project Manager Patel Chiarg (third from left).

The keynote address was given by invited guest Anil Kakodkar, nuclear physicist and former chairman of the Atomic Energy Commission of India. "ITER is our hope for the energy freedom of the world at large, for the development of a large part of humanity that is presently underdeveloped. ITER is the way to the new paradigm that the world is desperately looking for."

Rolf Bank, the Head of MAN Energy Solutions in Deggendorf, Germany, told the audience how his company was "happy to be part of the great ITER family," and to use its expertise in complex stainless steel structures and innovative welding technology to benefit the cryostat program.

The ITER cryostat is India's largest single procurement contribution to the ITER Project. Not surprising that for the ceremony marking the completion of the first two large sections many dignitaries travelled to ITER, including Indian nuclear physicist and former chairman of the Atomic Energy Commission of India, Anil Kakodkar (seen giving the closing address in this photo); India's Ambassador to France, His Excellency Vinay Mohan Kwatra; Praveen Bhatt, Joint General Manager of Larsen & Toubro; and Ujjwal Baruah, Project Director of ITER India. Others had joined by video conference.

Pointing out the area where the cryostat base will interface with other structures such as the magnet coils or the walls. The ITER cryostat is the largest stainless steel high-vacuum chamber ever built (16,000 m³), and will provide the high vacuum, ultra-cool environment for the vacuum vessel and the superconducting magnets.