A new agreement for a new era

The new agreement will clarify roles and responsibilities as construction is completed at the Neutral Beam Test Facility and operation in support of ITER intensifies. Taking part in the ceremony were (left to right) Deirdre Boilson, ITER Heating & Current Drive Division head; Chandramouli Rotti, ITER Neutral Beam Section leader; Roberto Piovan and Vanni Toigo from RFX; ITER's Bernard Bigot; RFX's Francesco Gnesotto; Akko Maas, ITER Science Engineering Officer; and Piergiorgio Sonato and Antonio De Lorenzi from RFX.
Two separate bilateral arrangements—one between Consorzio RFX and the European Domestic Agency Fusion for Energy, and the other between Fusion for Energy and the ITER Organization—currently govern the construction and progressive commissioning and operation of the Neutral Beam Test Facility in Padua, Italy, which has been underway since 2012. All parties involved viewed the complex governing structure as a hindrance to efficient execution of decisions, and had expressed interest in finding a better way forward.


"The Neutral Beam Test Facility has progressed well," says Deirdre Boilson, Head of the Heating & Current Drive Division at ITER. "But that was largely due to the dedication and motivation of the people involved, working around the difficulties inherent in a three-way agreement. Under the current agreements, the work was headed by a program committee, which was non-executive. Under the new agreement, this structure is replaced by a steering committee made up of senior executives from each partner, and chaired by the ITER Organization Director-General."


The purpose of the test facility is to serve as a test bed to demonstrate the design concepts underpinning the ITER heating neutral beams and to provide essential input to the design of the components procured for ITER. All results will be transferred to the design packages of the Procurement Arrangements covering the neutral beam system by 2027 to allow the neutral beam systems to be in operation at ITER by 2032. After this initial stage, the Neutral Beam Test Facility program in Padua will enter into a second stage, in which it will serve as a test bed for on-going performance enhancement. 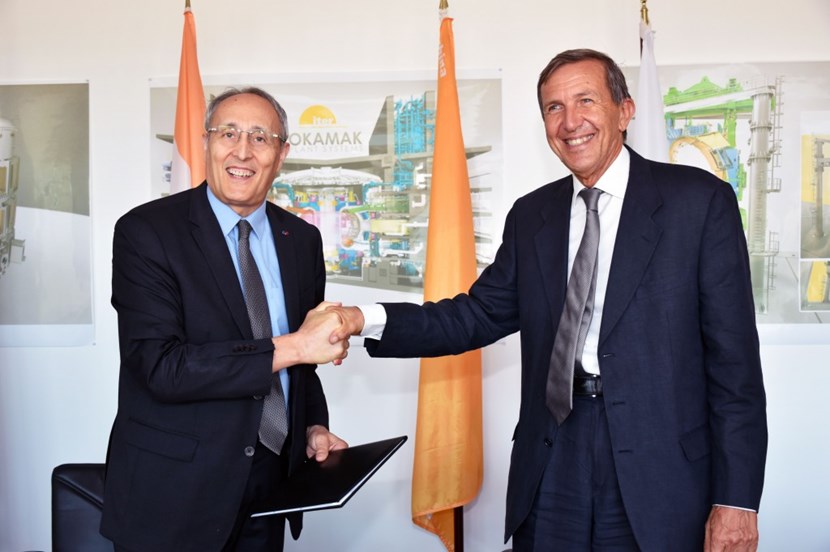 ITER Director-General Bernard Bigot and Consorzio RFX President Francesco Gnesotto sign a ten-year agreement for the construction and operation of the ITER Neutral Beam Test Facility in Padua, Italy. A first testbed is already operating and a second is in construction at the facility, which is a test centre for ITER neutral beam injection.
The new agreement between Consorzio RFX and the ITER Organization is expected to expedite work during both stages by establishing a direct contractual relationship between the two parties concerned—who are also the main stakeholders—and by establishing clear executive control and a clear set of governing procedures.


In the spirit of speed and efficiency, the preparation for the start of the new agreement has already commenced immediately following ratification of the new agreement. During the preparatory meeting, three key processes were agreed: appointing the project manager, nominating the advisory committee, and preparing for the 2020 work program ... all to take effect as of January 2020.