ITER Scientist Fellows are at the cutting edge

Share Tweet
Research | ITER Scientist Fellows are at the cutting edge
In the area of cutting-edge research—and particularly the sophisticated modelling of plasmas—the project is benefitting from the assistance of world-renowned experts through the ITER Scientist Fellow Network program. Now into its fourth year, the program is beginning to produce concrete results. 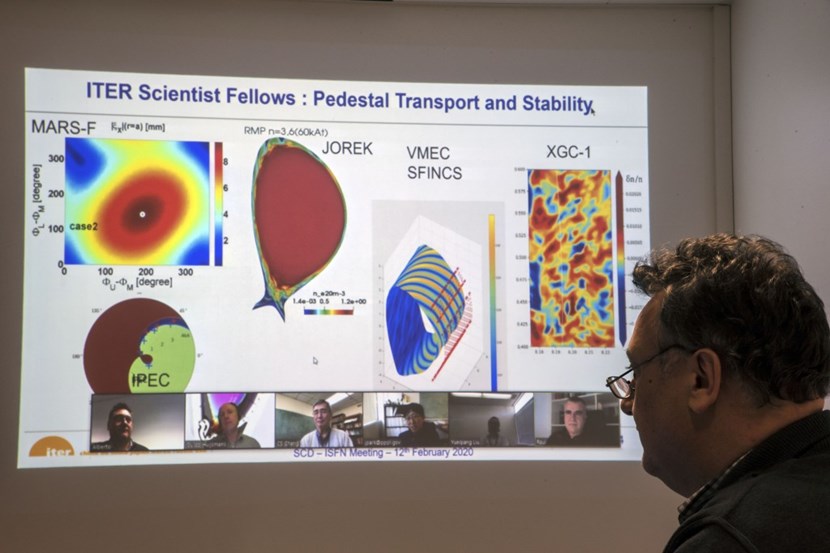 In February, head of the ITER Science Division Alberto Loarte met with members of the Pedestal Confinement and Stability Group. Outside of the coordination meetings planned at the ITER site, much of the work between Fellows and the ITER coordinators takes place by email and teleconference.
"When we want to do detailed studies for the planning of operations using established codes and approaches, we usually place contracts for which leading Member institutes compete," points out Alberto Loarte, head of the ITER Science Division. "With the Scientist Fellow Network we are aiming for something quite different: encouraging state-of-the-art development in simulation and theory for ITER through advanced calculations and cutting-edge research."


The Fellows focus on areas of interest to the ITER team but which also advance their own research objectives—for example, developing new models to apply to plasma simulations or using known codes in novel ways. "The results are never guaranteed, however. This is a research activity."


Sixty-six scientists are currently collaborating as ITER Scientist Fellows, organized into groups of 4 to 20 by theme (see box). Six groups are managed within the Science Division; a seventh has been created in the area of diagnostics. Every scientist has an annual work plan, and one or two coordination meetings are planned yearly at the ITER site during which the Fellows present their results, hear about the work of other Fellows and ITER Organization scientists working in the same area, and are kept abreast of ITER developments (updated plasma scenarios, design changes, etc.). Outside of these on-site meetings, much of the day-to-day work between the Fellows and the ITER coordinators takes place by email and teleconference. 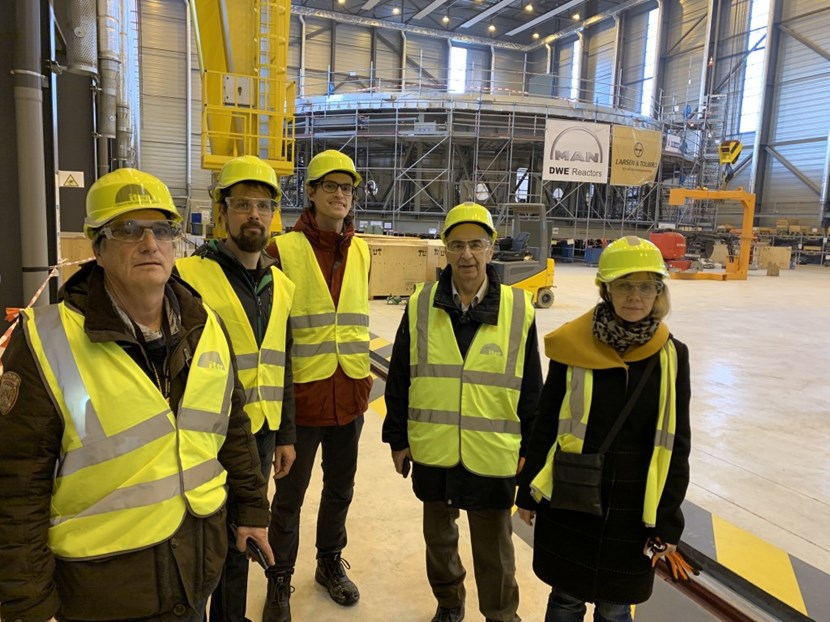 During a meeting at ITER, Scientist Fellows from the Divertor and SOL simulation group tour the Cryostat Workshop. In the background: the 1,250-tonne cryostat base that is being readied for transfer to the Tokamak pit.
"The ITER Scientist Fellow program allows us to bring together world-renowned experts from different laboratories around areas of specific development for ITER. With time, we are seeing a very productive dynamic within the groups, as well as a certain amount of cross-fertilization between areas. As we move forward with the understanding of ITER plasmas, which is required to plan the experiments, the contributions of the Fellows are proving increasingly valuable."

And the results are increasingly visible in the fusion community. "After two or three years of build-up, depending on the group, we are now in production mode," says Alberto. "Output from the ITER Scientist Fellow program was featured at major conferences and specialized workshops in 2019, including invited presentations (e.g., at the American Physics Society Division of Plasma Physics Conference, the Workshop on Tritium Transport Modelling in Nuclear Fission and Fusion, etc.) and publications in high-impact journals in the field such as Nuclear Fusion, Physics of Plasmas, Plasma Physics and Controlled Fusion, etc.). This brings recognition to the individual scientists as well as to their home labs." As a result of the quality and the increased visibility of the work carried out by the Fellows, the ITER Organization is seeing a rise in nominations.


The typical nominee for the fellowship program has a strong international reputation in his or her area of expertise, often leading teams of scientists in their home institutes. Fellows commit to spending a substantial part of their time working on ITER-related issues, with multi-annual research programs and targeted annual goals. Fellows are named for three years and the appointments are renewable. Since the start of the program in 2016, more than 80 percent of the early participants have been renewed.


"The program has been instrumental in increasing the community's sense of ownership of ITER's science," says Alberto. "As we prepare for the scientific exploitation phase of the device, this network of scientists involved directly in advanced modelling of ITER plasmas will be irreplaceable."