Share Tweet
Science | New steady state analysis
Recent research shows it should be possible to reach steady-state fusion production in ITER with the baseline mix of heating and current drive systems, in particular by upgrading the levels of power delivered to the plasma by neutral beam injection and electron cyclotron wave heating. 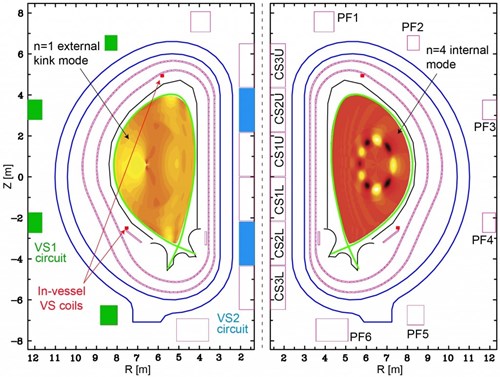 ITER scientists use integrated modelling to predict the behaviour of the plasma. This figure shows the structure of the magneto-hydrodynamic instabilities that limit the plasma pressure achievable in a steady-state plasma, including instabilities that develop in the external plasma region (left) and near the central part of the plasma (right).
"One of the goals of ITER is to show that we can produce fusion power for an unlimited amount of time with high fusion gain (Q≥5)—so-called 'steady-state' operation," says Alberto Loarte, Science Division Head. "There are no physics or engineering hurdles holding us back."


But since ITER is an experimental facility, designed to facilitate a wide range of explorations, its baseline configuration is not optimized for steady-state operation. To achieve this, ITER will need to demonstrate operation with very high confinement—but not only.


"We will have to replace the inductive current provided by the central solenoid with plasma-driven current (bootstrap) and currents driven by neutral beam injection and electron cyclotron waves. And we'll have to do this for an hour at a time which, for all intents and purposes, is equivalent to steady-state operation."


H-mode (high-confinement mode) is an operational regime during which the plasma reaches a state of high energy confinement and produces fusion power with very hot plasmas and a low consumption of the magnetic flux, which is beneficial for long-pulse operation. In L-mode (low-confinement mode), by contrast, fusion power production is low, the plasma is colder and magnetic flux consumption becomes non-negligible, which shortens the length of tokamak pulses.


While short-pulse operation is technically easier to achieve, it comes with disadvantages related to transient forces and thermal cycling. The large amount of magnetic energy needed to create a plasma requires very large currents in the magnet coils for every pulse, which in turn subjects the coils to large cyclic forces and stress.  As the tokamak cycles back and forth—between phases with extremely hot plasmas and high fusion power, to phases with no fusion power production—the expansion and contraction causes stresses that reduce component lifetimes. In addition, for a fusion reactor running in pulsed mode, extra measures would have to be implemented to provide the steady stream of electricity that customers need. 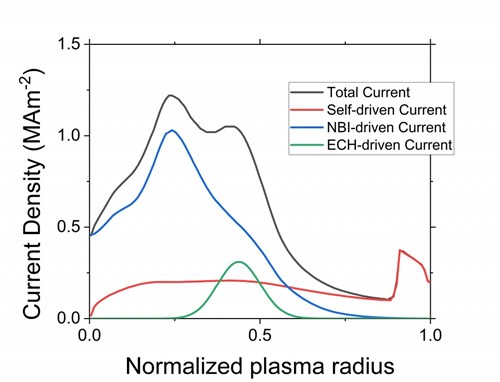 Operators will use the baseline mix of heating and current drive systems (neutral beam injection and electron cyclotron wave heating) to reach the desirable steady-state H-mode regime. This figure breaks down the plasma current profile in a steady-state plasma into its component parts: the plasma current that is self-driven by the high pressure of the plasma, and the currents created by the heating and current drive systems in ITER (neutral beam injection and electron cyclotron wave heating).
Steady-state tokamak operation presents the advantage of having just two transient mechanical (forces) and thermal (heat-up/cool-down) events—switch-on and switch-off—over a very long period of continuous operation, however it is not an easy regime to reach. While other magnetic confinement systems such as stellarators are intrinsically steady state, reaching steady-state H-mode operation in a tokamak requires a delicate optimization of plasma conditions through operational control.


"By controlling the evolution of the plasma density and plasma current, you can establish a plasma current profile shape near what is needed to have a stable plasma in steady state, but at lower temperatures and pressures. This makes things easier," explains Loarte. "Then you add a lot of auxiliary heating to create the transition to H-mode, and you increase the plasma pressure to enhance the self-driven plasma current and current drive to replace the remaining inductive current. The current shape profile remains frozen due to the high temperatures, ensuring that the plasma remains stable at high pressures.  That's the trick you have to pull off."


No one was completely comfortable with this idea. Moving systems between ports in ITER is very complex and disruptive for a number of reasons: the port plugs that house the system must be extracted and re-inserted, the pipes and transmission lines that feed the systems in the ports must be disconnected and reconnected, etc. ITER scientists were looking for a better solution.

The good news came with the recent demonstration that steady-state H-mode could be achieved at ITER without adding the lower hybrid wave heating and current drive system.


"Using integrated modelling, we set out to show that we can control core plasma stability in this scenario with the baseline heating and current drive mix at ITER," says Alexei Polevoi, from the Plasma Modelling & Analysis Section. "By the use of neutral beam injection and electron cyclotron wave heating and current drive, we demonstrated that it's possible to reach the target operation point, where steady state is reached, within the limits of the magnet systems that ITER has. We determined that an upgrade of the neutral beam injection system (to 49.5 MW, versus the baseline of 33 MW) and the electron cyclotron heating system (to 30 MW, versus the baseline of 20 MW) would be required to make Q=5 steady-state operation, with reasonable assumptions regarding the achievable energy confinement."

Q is the ratio of thermal power produced by the fusion of hydrogen isotopes (deuterium and tritium) to the amount of thermal power used to initiate and sustain the fusion reaction. So far, no fusion device has achieved even Q=1, the break-even point, with deuterium-tritium plasmas. The closest to date has been Q=0.67, which was reached at the European Union tokamak JET (UK).

One of the things that sets ITER apart is that it is designed to achieve a lofty Q≥10. More specifically, it should produce a fusion power output of at least 500 megawatts from an input heating power of 50 megawatts.

This result reassured the ITER scientists, because for this upgraded power level their models require a level of confinement for Q=5 steady-state operation very close to what has been observed in other tokamak experiments—for example those at the DIII-D tokamak in San Diego—with density, temperature and current density shapes very similar to ITER, and a similar mix of external heating."


The researchers presented these results to the ITER Council Science and Technology Advisory Committee (STAC) in October 2018, arguing that lower hybrid wave heating would not be needed to achieve steady-state operation in ITER. The committee approved the findings. Because removing the possibility for the upgrade to lower hybrid represented an important modification to the project, the team brought this proposal before the ITER Council, where it was accepted, and then implemented the appropriate technical procedures within the project in 2019.


This is good news, but more work needs to be done. "We still need to conduct further studies on how to implement these techniques in real experiments in ITER," says Sun Hee Kim, Scientist for Scenarios and Control. "We need to define the experimental procedures that first get us a plasma current profile close to target, but at very low plasma pressure, and then increase the plasma pressure using heating and current drive nearly to the plasma stability limit without significantly modifying the current profile."


While mastering this delicate set of operations will be a challenge, the reward is very high plasma performance, with the sought-after steady-state operation delivering Q=5.