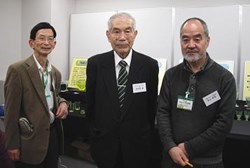 Ken Tomabechi, centre, was an influential figure in fusion at a time when ITER was just getting started. He led the ITER Conceptual Design Activities from 1988 to 1990.
The ITER Organization has learned that Ken Tomabechi, a well-known member of the international fusion community, passed away at 91 years of age on 24 April 2020.
After degrees in science and philosophy, Dr Tomabechi began his career in nuclear fission at the Japan Atomic Energy Research Institute (JAERI), where he contributed to the development and construction of early fission reactors.


An interest in fusion energy led him to participate in the international design effort toward INTOR, a fusion engineering test reactor, and then—in the early 1980s—to the effort underway to construct the JT-60 tokamak in Naka, Japan. He served successively as the Director of JT-60 Construction Department, and the Director General of the JAERI Naka Fusion Research Establishment.


In 1988, in Garching, Germany, conceptual design activities for ITER were beginning under the auspices of the International Atomic Energy Agency (IAEA), with approximately 50 experts representing Europe, Japan, Russia, and the United States. Dr Tomabechi was invited to lead the activities as Director until their completion in 1990. (See an ITER concept paper that he authored in 1988, and an overview of the concluded design activities that he published in 1991.) In 1994, the ITER Council appointed him Chair of the Special Review Group to review the technical, social, safety and environmental requirements for siting the ITER Project—a task that he successfully concluded in July 1995.
Jean Jacquinot, former Director of the European tokamak JET and current Senior Advisor to the ITER Director-General, remembers Dr Tomabechi with fondness.


"I met Ken Tomabechi several times when he was the director of the ITER conceptual design activities in Garching. He led this effort with great finesse and efficiency. Discreet, but highly sociable and friendly, it was a joy to talk to him on any cultural subject. He was deeply competent on many topics but conversation with him would often move toward a true passion of his—uranium glass. He had an impressive collection, and he wrote a beautifully illustrated book on the subject that is even now a reference on the topic. We will very much miss a friend who was a highly cultivated gentleman."


Dr Tomabechi was a member of the Japan Atomic Energy Society (and recipient of the 1977 Outstanding Technology Achievement award), and of the Japan Society Plasma Science and Nuclear Fusion Research. In 2000, he received the Fusion Power Associates Distinguished Career Award in recognition of his many accomplishments.


His many years of leadership in the fusion program in Japan and his essential contributions to the ITER Project and to international collaboration on fusion will be remembered.