A jewel in a box

Share Tweet
Component delivery | A jewel in a box
Sailing under the flag of Germany, the Regine is a mighty ship, strengthened for heavy cargo and equipped on its portside with two 750-tonne on-board cranes. Having sailed from Korea on 25 June, the ship berthed at Marseille-Fos harbor on the morning of 21 July. In its hold, the ship carried a dull, cabin-sized metal box with slated walls and a corrugated roof. The box was nondescript, but inside it contained a 450-tonne jewel that had been more than ten years in the making. 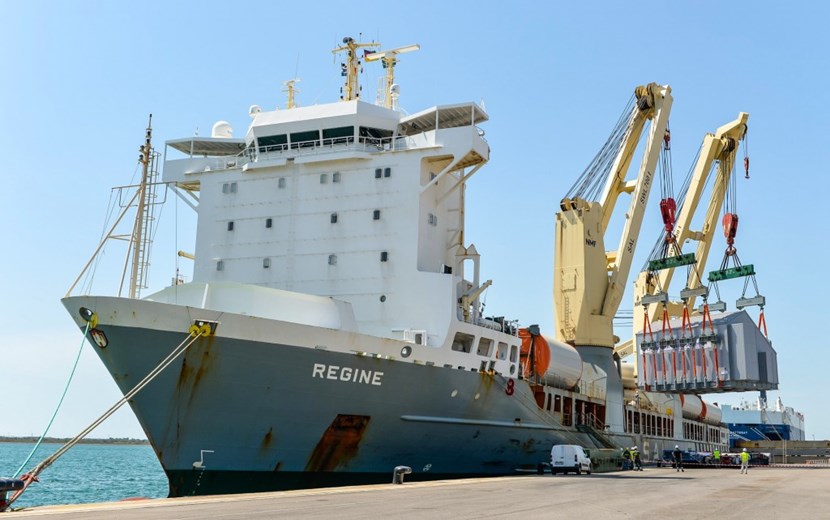 On Wednesday 22 July, the first vacuum vessel sector from Korea was unloaded at Marseille harbour—a long and delicate operation that lasted more than two hours. Photo Emmanuel Bonici
An ITER vacuum vessel sector is a wondrous piece of technology and one of the most challenging sub-components of the whole machine. As the vacuum vessel acts as the first confinement barrier for the burning plasma, its elements are subject to stringent regulations, strict controls and in-depth inspections at every stage of the fabrication process.
A single sector (and it takes nine to form the toroidal structure of the vacuum vessel) comprises approximately 20 kilometres of welds that must all be carefully verified and tested, and for which several dozen ultrasound scanning techniques were developed. 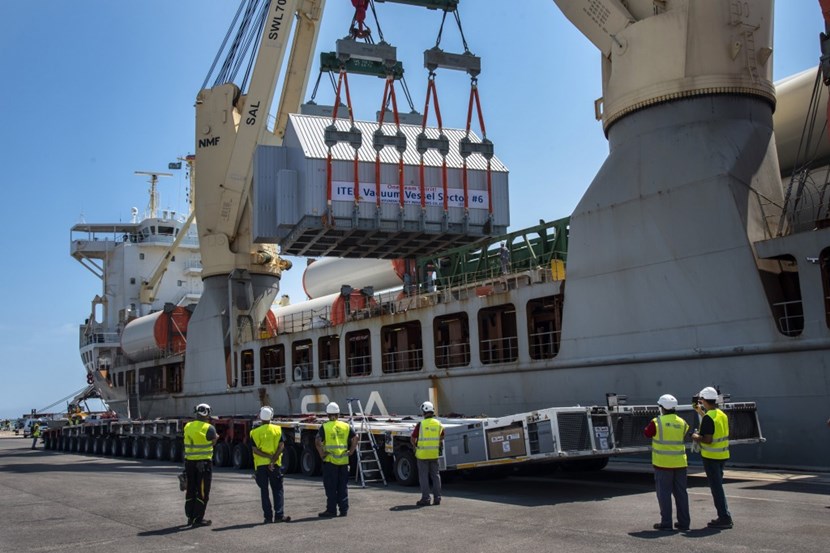 This dull, cabin-sized metal box with slated walls and a corrugated roof houses a a wondrous piece of technology and one of the most challenging sub-components of the whole ITER Tokamak.
Captain Franck Escher, of the Regine, was aware that his cargo was unique. His ship had handled loads that were considerably heavier, but none as precious as the one he was preparing to unload.
The operation was a long and delicate one that lasted more than two hours. Equipped with a complex rigging arrangement, the load was slowly lifted from the deep cargo hold, pivoted to align with the waiting transportation platform, and finally lowered and positioned carefully onto the waiting flatbed truck.
All the while powerful pumps, capable of moving 500 tonnes of water per hour, were filling ballasts on the starboard side of the ship to compensate for the weight of the cabin-sized component.
Another convoy, among the heaviest that will cross the inland sea Étang-de-Berre and travel the ITER Itinerary, is now on its way to the ITER construction site, heralding the start of a new project phase: machine assembly.
Click here to watch a video of the unloading operation on 22 July, commented by ITER Director-General Bernard Bigot and Vacuum Vessel Project Team leader Chang Ho Choi.