Share Tweet
Top management | Tim Luce, Head of Science & Operation
What does a seven-year-old growing up in a small community in Arkansas know about what it means to be an "atomic scientist"? Probably not much. Except, remembers ITER Chief Scientist Tim Luce, that "it sounded cool ..." 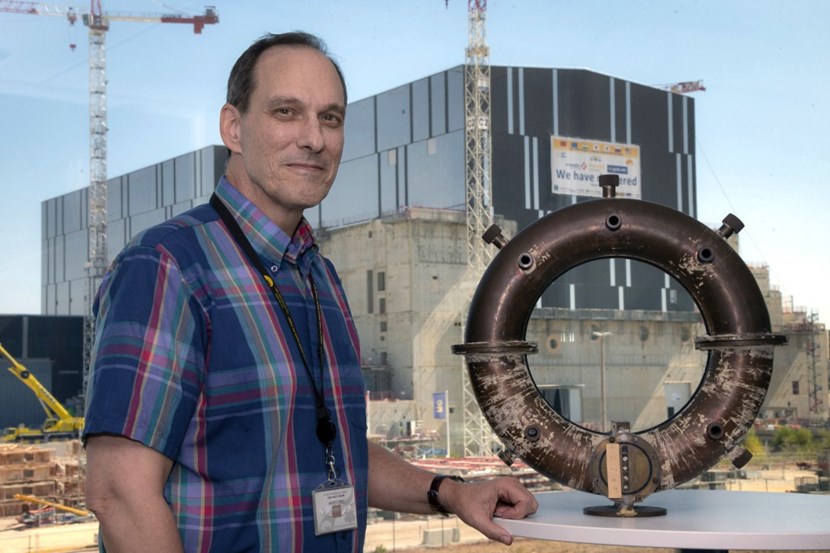 Chief Scientist Tim Luce against the backdrop of the ITER Tokamak Building, with the vacuum vessel of what could be the first attempt at building a tokamak outside the USSR in the late 1960s. ''Using a pipe bender, two postdocs at MIT made this perfect torus. Upon retirement, they bequeathed it to me ...''
Although Dad was an agricultural engineer and Mom a trained dietitian who became a schoolteacher, "the quest for knowledge was not encouraged" in Tim's childhood environment. But there were books to answer a young boy's questions and Tim fondly remembers the popular series "The How and Why Wonder Book of Science," which he devoured.


"The 1960s were a Golden Age for understanding how things worked and how to fix them," he reflects today. Men were going into space, soon to reach the Moon. And there was the promise of fusion. In New York, the most exciting attraction at the 1964 World Fair was a "nuclear fusion demonstration" that produced "fusion bangs" every 4-6 minutes ...


Maybe the noise was heard as far away as Arkansas and registered on the young boy's curious mind. Years later, in high school, Tim remembers writing a report on fusion—but confesses having "zero idea of what triggered his interest."


Another brush with fusion occurred when Tim was a student at the University of Arkansas. One of his professors had done work on pinch devices, one of the early fusion machine concepts. Tim's interest was aroused—why not venture into the realm of hot plasmas and colliding nuclei, and explore "this fantastic scientific problem and its potential application to society"?


There was a place where a brilliant physics major ("with zero plasma physics training but good basis in thermodynamics") could do exactly that: Princeton University, the Mecca of fusion. "It cost 25 dollars to apply. I took my chance. And I got in."


In terms of fusion research, Princeton in the mid-1980s was "a fantastic place to be"—great teachers, great machines, and the best "plasma education" one could dream of.


Operating since 1975, the Princeton Large Torus (PLT) had broken new ground in plasma temperature and the Tokamak Fusion Test Reactor (TFTR), which produced its first plasma in 1982, was one of the most powerful tokamaks of the time.


As for the human and intellectual environment, "all the guys you now read about in history books were there ... all the big names, just across the corridor."


Working on microwave diagnostics on PLT, "with TFTR around the corner," Tim, still in his twenties, was part of a worldwide quest that had never seemed more promising. After the Golden Age of mechanics of his childhood, came the Golden Age of fusion devices: half a dozen of them in the US alone, TFR in France, the European JET a few years away, ASDEX starting in Germany, JT-60 in Japan, T-15 in the then Soviet Union ...


In California, General Atomics had just started DIII-D—not the most advanced or the most powerful of tokamaks, but one that a young Princeton graduate could "get his hands on." "The staff was so small," Tim remembers, "that we'd get our hands into everything, learn by doing and devise complementary experiments that we performed on other machines."


Tim was to remain 30 years at General Atomics, while spending some 25 percent of his time abroad in the early years, experimenting on other machines and interacting with the world fusion community. "All the leaders of today, we worked together as kids..."


Tim was not 30 yet when he attended his first ITER meeting in 1989. "I thought: here is my career. And I have spent the past two decades paving the way to fusion as an energy source."


In September 2017, 28 years after that first meeting, Tim was appointed Head of the ITER Science, Controls & Operation Department.


From this year, as acting Domain Head for Science & Operation, his responsibility has dramatically expanded. "Beyond furthering the physics R&D and working to shorten the learning curve, my job, basically, is to solve problems, many of them logistical problems like tracking the delivery of systems or preparing paperwork for licensing."


Like the young boy that he once was, Tim continues to ponder the same questions—"What do I not know? What can I better understand? What can I solve?" Except that, now, he is the one writing the new chapter of "The How and Why Wonder Book of Science."