Canada returns to the table

Share Tweet
Cooperation | Canada returns to the table
Canada, one of the early participants in ITER, is back in the project. On Thursday 15 October, Bernard Bigot, on behalf of the ITER Organization, and Assistant Deputy Minister Dan Costello, on behalf of the Canadian government, signed a Cooperation Agreement. The agreement sets out the terms of cooperation for the transfer of Canadian-supplied nuclear material (tritium), and tritium-related equipment and technology. 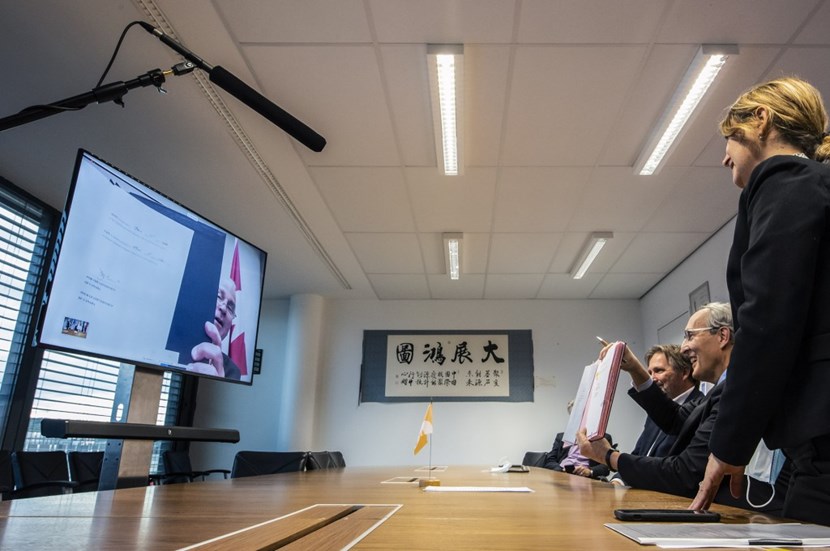 ITER Director-General Bernard Bigot (right) and Assistant Deputy Minister Dan Costello (on screen) signed the Cooperation Agreement on Thursday 15 October. Close to 20 years after the initial offer to host ITER, Canada has returned to the table. (Also pictured at the signing are Remote Handling & Radwaste Management Division Head, Spencer Pitcher, and Head of Legal Affairs, Laetitia Grammatico.)
Canada played an important role in the early years of ITER . In the spring of 2001, as the ITER Members¹ were finalizing the blueprint of the installation, a group of businesses, academics and trade unions offered to build ITER on Canadian soil—a proposal that provided a much-needed international credibility to the project.


Although the Members eventually made a different choice, contacts between ITER and Canada were never severed. The country's expertise, especially in tritium-related technologies, made it a natural partner for ITER and, as Director-General Bernard Bigot emphasized prior to this month's signature, "it was becoming evident that cooperation between the Canadian Government and the ITER Organization should be developed." In April 2018, the two parties signed a Memorandum of Understanding agreeing to explore the possibility of future cooperation and, since then, several Canadian government representatives have visited the ITER site.


ITER will begin producing deuterium/tritium plasmas in the mid-2030s. Over the course of its experimental campaign, it will consume the totality of the world tritium inventory, which amounts to only a few dozen kilos.


The main source of tritium, which occurs naturally only in trace amounts, is a type of fission reactor called the CANDU. Developed in Canada in the 1950s and 1960s, CANDU reactors use natural uranium as fuel and heavy water as moderator, generating small quantities of tritium as a by-product.


There are presently 31 CANDU reactors operating around the world, 19 of them in Canada. Beyond direct cooperation with Canada, the Cooperation Agreement signed on 15 October is indispensable to allow for the "retransfer" of technologies from countries such as Korea or Romania, both partners in ITER, who also operate CANDU reactors.


The establishment of this Cooperation Agreement with the Government of Canada will enable the ITER Project to associate one of the largest and most experienced technically-relevant tritium communities outside of the founding ITER Members.


¹Because the United States left the ITER Project between December 1998 and January 2003, and Members China, Korea and India had not yet joined, in 2001 the ITER Members were Europe, Russia and Japan.