Share Tweet
Thermal shield | The ultimate heat barrier
In the Assembly Hall environment, all yellowish hues and dull-grey structures, a strange component shines like a freshly polished mirror. Lying horizontal, it looks like a giant's tiara; when upended to the vertical position and paired to its missing half, it will fit a vacuum vessel sector almost like a glove. 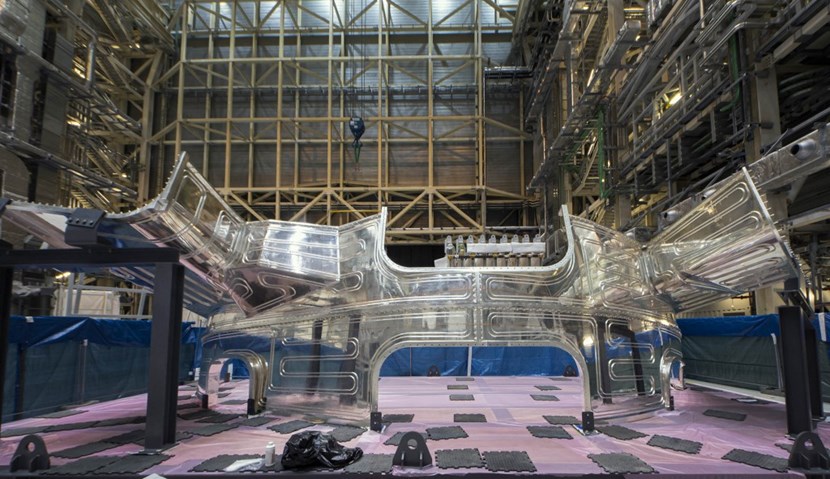 Looking like a giant's tiara. Once the outboard segment (pictured) is paired with the inboard segment, the thermal shield will form a protective shell around vacuum vessel sector #6.
Sitting alone in a protected enclosure, the shiny component is the outboard segment of one of the nine vacuum vessel thermal shield sectors that, once assembled, will fit between the vacuum vessel and magnetic system of the machine and act as a barrier against the transfer of heat to the ultra-cold superconducting coils.
The component's shine is due to the thin layer of silver that covers its entire surface. A "low emissivity" material, silver raises an obstacle against the thermal radiation, in the form of electromagnetic waves, that a heat source generates. Radiation is one of the three ways heat can pass from one body to another, along with convection (through a fluid such as air) and conduction (by contact).
The plating of the vacuum vessel thermal shield was done in electrolysis baths that required 5 tonnes of pure silver. Approximately 800 kilos went into the coating of the 2,000 square metres of vacuum vessel thermal shield—the equivalent of 100,000 sterling silver rings.
The ITER superconducting magnetic system, which operates at the ultra cold temperature of 4 K (minus 269 °C), is protected from heat convection by the cryostat—the vast vacuum chamber that encloses the machine (no air ... no convection). 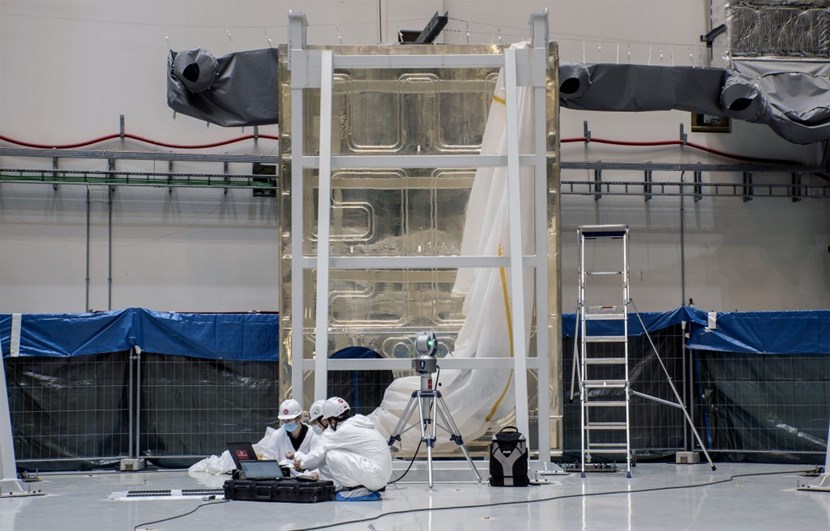 Silver-plated thermal shield panels are being arranged in a circle to form the lower section of the cryostat thermal shield, which should be lowered into the assembly pit in late November.
It is insulated from warmer bodies—and everything is warmer than 4 K—by sitting on actively cooled pedestals, called gravity supports.
"Opaque" to electromagnetic radiation and positioned in the immediate vicinity of the magnetic system, the silver-coated vacuum vessel thermal shield, actively-cooled by gaseous helium at 80 K (minus 193 °C), adds a third and final protection against heat transfer to the ultra-cold superconducting coils.
Not far from the enclosure of the giant's tiara in the Assembly Hall, another set of silver-plated elements is being arranged in a circle prior to being bolted together and inserted into the assembly pit. These soberly rectangular panels will form the lower section of the cryostat thermal shield that will stand between the cryostat inner wall and the magnets.
Like the vacuum vessel thermal shield, the cryostat thermal shield (both procured by Korea) will contribute to protecting and insulating the uniquely frigid environment of the magnetic system—colder than the coldest winter day on Pluto.