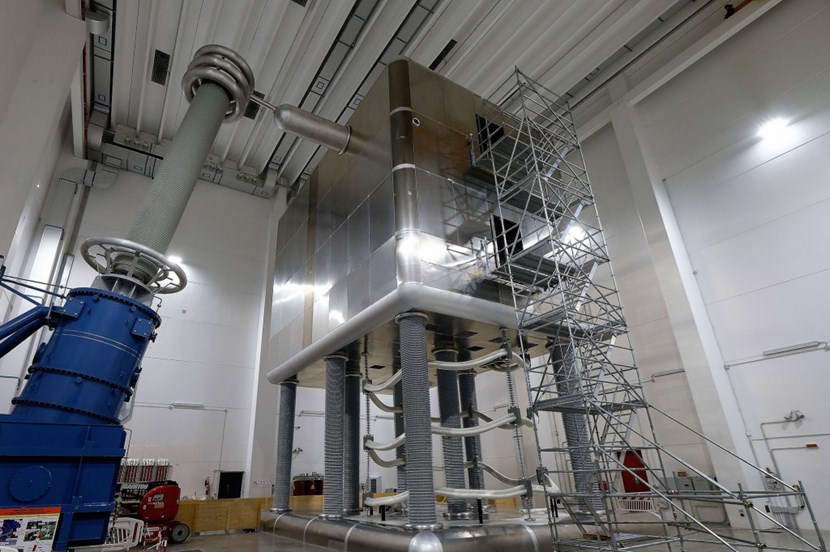 Inside the MITICA high voltage hall at the ITER Neutral Beam Test Facility, where the 1MV insulating transformer bushing (supplied by Hitachi Ltd, Japan) connects to the high voltage deck supplied by Siemens AG (Europe).
The first integrated tests on MITICA's* 1MV power supply system were carried out successfully, despite travel limitations due to the pandemic. A new organization model for integrated testing was proposed by the Japanese Domestic Agency and agreed to by the ITER Organization and Consorzio RFX before the tests were carried out in October.
Usually, such critical tests would require the presence on site of the entire research team as well as supplier and Domestic Agency representatives. With travel impossible for Japanese partners, the Neutral Beam Test Facility team modelled procedures to work around this constraint while still guaranteeing that all operation and contractual responsibilities could be respected.
As agreed in this novel protocol, the Japanese Domestic Agency recruited a supervisor in Italy who could be its on-site representative during the integrated tests. "The supervisor communicated in real time with an instructor present in a control room at the Japanese Domestic Agency, QST, who in turn was in communication with other QST experts and Hitachi, the company that manufactured the systems," explains Vanni Toigo, the Neutral Beam Test Facility Project Leader. The teams in Japan evaluated the results and instructed the supervisor in his communication with staff at the Neutral Beam Test Facility and other experts present on behalf of QST.
Mieko Kashiwagi, neutral beam group leader for the Japanese Domestic Agency, calls it "in-out return intercontinental" data input. "The on-site supervisor provided his Japanese colleagues with real-time data during testing to allow the shared monitoring of plant performance and integration capability, and at the same time collected feedback."
The first integrated tests—which integrated two parts of the throttle power system (static conversion provided by Europe and high voltage components provided by Japan)—were successfully carried out at 50 kV. The next step, in the next weeks, is testing at 1MV.
*At the ITER Neutral Beam Test Facility in Italy (hosted by Consorzio RFX), the MITICA experiment is a full-scale prototype of the ITER heating neutral beam injector, with a deuterium beam of 1 MeV and 16.5 MW of power. (MITICA stands for Megavolt ITER Injector and Concept Advancement.) Learn more here.