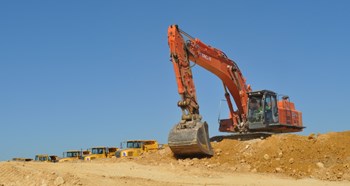 A power shovel removes the first of some 230,000 cubic metres from the Tokamak Pit.
The first days of August in southern France are usually very quiet. This is the heart of the summer holiday season; half the shops and businesses are closed and every serious decision has to be postponed until la rentrée, the first weeks of September when life finally gets back to normal.


On a small, 42 hectare-wide area of southern France, however, the first week of August was marked by renewed activity.


Bulldozers, scrapers and power shovels were back on the ITER platform: under the responsibility of the European Domestic Agency F4E, work began in the Tokamak Pit and on the 14,000-square-metre area that will host the huge Poloidal Field Coils Winding Facility.


On Wednesday 4 August , after some preparatory works had been done during the previous week, a lone power shovel began removing the top soil from the Tokamak Pit—the first of some 230,000 cubic metres that will have to be extracted  in order to make room for the installation.

Operations and safety on the ITER platform are being carefully coordinated by the ENGAGE Consortium and the French company APAVE.
In a little more than three weeks, blasting specialists will move in for two months. Explosives will be used to blast some of the rock layer at an average rate of 4,000 cubic metres per day.


Some 250 metres away, bulldozers and scrapers were busy levelling the poloidal field coils assembly area and preparing a smooth "sub-base" on top of which a 30- to 40 centimetre-thick concrete floor slab will be poured in about a month.


Operations on the ITER platform are being carefully coordinated under the authority of the ENGAGE Consortium and, as far as Health & Safety are concerned, by the French company APAVE.

Bulldozers and scrapers are busy levelling the 14,000-square-metre area that will host the huge Poloidal Field Coils Winding Facility.
Coordination will be crucial starting at the end of the month, when rock will be blasted here and concrete poured there .... It has been decided that blasting will be performed during lunch break and concrete poured in the afternoon, then left to harden during the night.


"This is the first actual work en route to First Plasma," says Ben Slee, Deputy Head of Site Building and Power Supplies at F4E. "It is essential to keep the schedule ...."


While actual work on the future ITER Headquarters and related buildings will only start in September, preliminary earthworks have been ongoing for a couple of days below the northeast corner of the platform.


Agence Iter France, who is responsible for construction, expects to deliver the buildings (co-financed by France and F4E) by mid-2012.