Passing of the torch at ITER and CEA 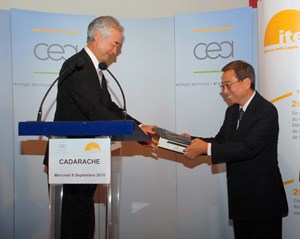 An i-Pad to continue reading Newsline anytime anywhere—this is the farewell gift that Director-General Motojima handed to former Director-General Ikeda on behalf of the ITER Organization.
"CEA and ITER have two things in common," pointed out CEA Administrator General Bernard Bigot last Wednesday in Cadarache. "Both institutions," he said "bear the heavy responsibility of preparing the future of the planet," and both share a "brilliant history, written by exceptionally competent individuals."


The "family ceremony" which gathered some 200 guests at La Fenière hall, at the Château de Cadarache, was intended to honour four of these individuals. On the CEA side, Cadarache Director Serge Durand, who was passing the torch to Maurice Mazière; on ITER side, Professor Osamu Motojima who is succeeding Kaname Ikeda as Director-General.


Serge Durand and Kaname Ikeda both arrived at Cadarache at approximately the same time—the end of the year 2005. Five years later, Serge Durand is heading to Grenoble, where he will be in charge of establishing an operation centre for the European Energy Knowledge and Innovation Community; Kaname Ikeda heads back to Japan to hold an important position at the Japanese Atomic Energy Agency.


In his address, the former CEA-Cadarache Director stressed the quality of the relationship that was established between him and his ITER counterpart, as well as the "strong and permanent collaboration" that developed between the two institutions. 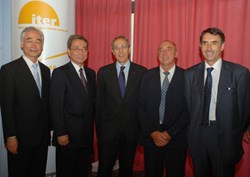 CEA Administrator-General Bernard Bigot (centre) and four of the ''exceptionally competent individuals'' who make CEA and ITER's history.
Kaname Ikeda, who addressed the guests in French, thanked everyone present for their "warm hospitality" and confided that only "mutual trust" made his job possible. "My time at ITER and in Provence," he said, "was a time of happiness."


The confident—and efficient—relationship between CEA and ITER will no doubt continue. New CEA Director Maurice Mazière emphasized the importance of "CEA-Cadarache's relationships" with its partners.


Professor Motojima, after briefly greeting his audience in French, concluded his address by saying: "Whatever our individual jobs [...] we are all fully committed to a task that is larger than ourselves. [...] Together, we will make sure that fusion energy, that dream of three generations of physicists, becomes a real target of realization. Together, we will work to make Cadarache the place where the energies of the future, and the future of energy, take shape."