ITER as a driving force for local development 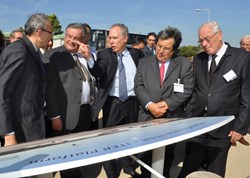 ITER's Deputy Director-General Carlos Alejaldre presents the ITER site to French Minister Mercier (2nd from left). Also present are CEA Administrator-General Bernard Bigot (left); Regional Prefect Michel Sappin and Bernard Jeanmet-Peralta, the Mayor of Manosque.
From the heights of Montgenèvre, close to the Italian border, to the wide expanses of the Plain of Avignon, the Durance River Valley stretches from northeast to southwest for some 350 kilometres.


An inroad of civilization in Roman times, it is now an essential link between the Alpine and Mediterranean parts of the Provence region.


The Durance River Valley is not an official administrative division. It is a "territory" however, that is united by history, geography, economy and culture.


The creation of CEA-Cadarache, in 1959, largely contributed to transforming the Valley's economy, which was then essentially rural.


Fifty years later, both the French administration and the local governments in Gap, Sisteron, Manosque and all the way down to Aix and Cavaillon, expect that ITER's impact will be no less decisive.

The Durance River Valley, here looking north toward the village of Les Mées, is a ''territory'' that is united by history, geography, economy and culture.
What is at stake here, as expressed by French Minister of Planning and Land Development Michel Mercier, is "to make ITER the driving force behind the development of this region."


The Minister came to Cadarache on Thursday 7 October to preside over the inauguration of the Groupement d'Intérêt Public (GIP), a structure that will aim at "implementing synergies" between the various administrative bodies, local governments and institutions that share authority over the Valley's territory.


The GIP's founding members and members of the Board are the eight local governments who contribute to the financing of the ITER Project; the French State and CEA. As "associated members" the ITER Organization and the European Domestic Agency will take part in the GIP's activities and hold an advisory vote.


This structure, which the Minister defined as "transitory and flexible," is entrusted to create the "operational tools" that will "optimize the economic and technological benefits [from ITER]" and give concrete meaning to the "Valley of New Energies" that the Durance River Valley is destined to become.


Recalling the efforts that were engaged by the local governments to host ITER in Cadarache, Maryse Joissains-Massini, the mayor of Aix-en-Provence and President of the Greater Aix Council, renewed her commitment to the project and stressed the importance of "being united beyond territorial jurisdictions and political rivalries."