Located in a highly seismic zone and resting on a fragile seabed of clay, sand and silt, this 2.9 km structure is widely considered as an engineering feat. It is designed to withstand wind speeds of more than 250 kilometres per hour, an earthquake of magnitude 7 on the Richter scale and the impact of a 180,000-tonne tanker.


The man who designed the foundation system for the Rion-Antirion Bridge was on the ITER platform last week and will be seen a lot around the Tokamak Pit—the "Seismic Isolation Pit," as it should be referred to—in the coming months. His name is Alain Pecker; he is a veteran "geotechnical engineer" who, for the past 30 years, has worked on "integrating the nature of the geological substratum into the design basis of structures and installations"—several of them nuclear.

As excavation in the Seismic Pit is reaching the bedrock some 20 metres deep, geological engineers will have a much better ''view'' of the pit's rock slopes and of the substratum.
Pecker's job, as an expert for the ITER Organization, will be to confirm and refine the geological surveys and sampling that has been conducted on the platform since the site was chosen to host the installation.


As excavation in the Seismic Pit is reaching the bedrock, some 20 metres deep, the expert will have a much better "view" of the pit's rock slopes and of the substratum. "Some 360,000 tonnes will rest on this bottom," says Pecker. "Better make sure you know precisely what it is made of. Surprises are always possible."


Surprises, in the Seismic Pit's substratum, could come in the form of "karsts"—holes large and small that are bored by water erosion in the depths of the limestone bedrock and that the initial surveys could have missed. 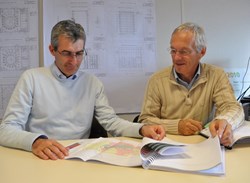 Pecker's job (right, with ITER Nuclear Building Section Leader Laurent Patisson) will be to confirm and refine the geological surveys that have been conducted on the platform since the site was chosen to host the installation.
Dealing with karsts, however, is routine work for a geotechnical engineer: whatever their size, and provided they are detected, the holes can be injected with concrete.


In order to locate karsts and other possible geological "accidents", like fissures, faults and other anomalies, a systematic survey will be conducted on the 130-by-90-metre zone of the pit's bottom and faces. In order to cover the position of all seismic pads, drillings will be carried out every 4 to 5 metres and up to 5 metres deep.


A radar survey will also be conducted, providing data for a 3D rendering of the substratum.


This whole process could take two to three months. Then, when the depths have been mapped and the possible "holes" filled, it will be time to pour the "first concrete" of the Tokamak Complex basemat—a major milestone in the history of ITER.