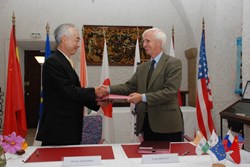 A handshake between ITER Director-General Osamu Motojima and European Director Frank Briscoe seals the ''go ahead'' for the neutral beam test facility to be built in Padua, Italy.
Last week, ITER Director-General Osamu Motojima and the Head of the European Domestic Agency "Fusion for Energy," Frank Briscoe, signed the Procurement Arrangement for the European share of the PRIMA neutral beam test facility being built in Padua, Italy. The signature, worth EUR 42 million, symbolizes the launch of another large international enterprise.


Today, neutral beam injectors are used routinely in major fusion devices. The negative ion beams shoot uncharged high-energy particles into the plasma where, by way of collision, they transfer their energy to the plasma particles. But ITER will be larger and more powerful than any existing fusion machine and so will be its heating technology. ITER will be equipped with two neutral beam heating and current drive injectors—each one delivering a deuterium beam of 16.5 MW with particle energies of 1 MeV, and able to operate for long pulses of up to 3,600 seconds. A third neutral beam line will inject a 100 keV/1.5 MW hydrogen beam for diagnostic purposes.


Operating neutral beams safely at such power levels requires some experimental experience. That is why in Padua, home to the Reversed Field Experiment (RFX) Project, the neutral beam test facility is being built. 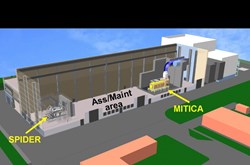 The PRIMA facility with the layout of SPIDER and MITICA.
Europe, India and Japan are the three ITER Members that are contributing to this project which now carries the official name Padua Research on ITER Megavolt Accelerator or PRIMA. PRIMA is made up of two test-stands: SPIDER, the short version for "Source for the Production of Ions of Deuterium Extracted from a Radio Frequency plasma" and MITICA standing for "Megavolt ITER Injector and Concept Advancement" which is the actual prototype of the heating neutral beam operated at 1MV.


The European Domestic Agency is providing all the other components for the two test-beds including the supporting systems, the cooling, the distribution of the insulating gas SF6, the cryosystems, the instrumentation and the control and gas injection systems.


Consorzio RFX and its national organization are providing the facility, including the infrastructure of new buildings covering a surface of two hectares and the adaptation of the existing 400 KV power substation.


Thanks to Deirdre Boilson and Beatrix Schunke, Acting Section Leader and Senior Technical Officer of the Neutral Beam Section, for their contribution to this article.