Fusion, the Prince and the Astronaut 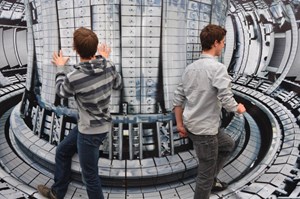 A perfect illusion: walking around the JET vacuum vessel at the Fusion Expo.
Belgium is currently assuming the EU presidency. In this context, an academic session and an exhibition were organized to draw the attention of the broader public to fusion and fusion research, and in particular to explain the need for the next-step ITER device: The academic session "Fusion, a compelling energy source & ITER, the crucial step towards creating a sun on earth" was organized on 24 September.


EFDA's Fusion Expo (presently under the responsibility of the Slovenian Fusion Association) is visiting Brussels from 25 October to 15 November. Both events are co-organized by the Belgian EURATOM Association, the European Commission, Directorate Euratom of DG RTD and ITER-Belgium at the Palace of the Academies, next to the Royal Place in the heart of Brussels.


The event brought together people from the academic and political world, and attracted industrial partners interested or involved in ITER. After an opening word by Prof. Weynants of the Belgian EURATOM Association, Mr. Cerexhe (who presides the EU Competitiveness Council for Research) stressed the need for international collaboration on this important project. 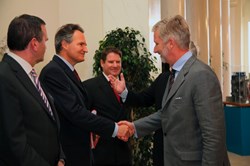 
Prof. Motojima, the Director-General of the ITER Organization, presented ITER as an opportunity and a reality, "the project now having gone beyond the stage of being a mere dream." Director of Agence Iter France Jérôme Pamela explained the timeline of ITER and the important role of Europe in the realization and success of this machine.


Prof. Niek Lopes-Cardozo (teaching the science and technology of nuclear fusion at TU-Eindhoven, the Netherlands) talked about the various physics and technological challenges fusion research is facing on its way to constructing fusion-driven power stations, highlighting fairly opaque topics such as anomalous transport in his usual lighthearted and dynamical style by drawing a parallel between controlling plasmas in fusion devices and ... preparing a cup of cappuccino!


After the talks, a number of movies were presented to the audience. First, a short movie in which the Fusion Expo was presented was revealed to the audience to give them a flavour of what the exhibition had to offer. The audience also had the opportunity to view the new 3D interactive movie of the European Commission. This "3D Fusion Show" aims to present fusion in an entertaining way, and is on display at the Fusion Expo. A little girl named Fusia is your mentor and guide.


The academic session was honored by the presence of Prince Philippe of Belgium who showed a lot of interest and posed many questions during the walking dinner that followed the lectures.


The Brussels edition of the Fusion Expo opened its doors on 25 October in the presence of Dirk Frimout, who joined the second 1992 Atlantis space shuttle mission and hereby became the first Belgian astronaut. The exhibition will stay open for the public until 15 November. Information can be found on the web site www.iterbelgium.be where it is also possible to download the poster of the exhibition and the movie presenting it.