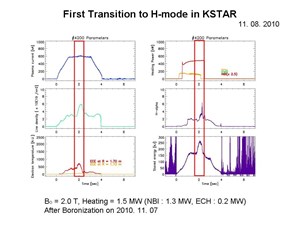 
"Although H-mode is not our ultimate goal," explained Myuen Kwon, the Vice President of the Korean National Fusion Research Institute (NFRI), "it is an important milestone, all the more since we achieved it one campaign ahead of schedule."


The H-Mode was "discovered" on the ASDEX Tokamak in February 1982 and later obtained on several other installations such as JET, DIII-D or JT-60. Almost three decades later, this plasma regime, which stores twice as much energy than the regular "L-Mode," still retains some fundamental mystery.


Physicists and tokamak operators know how to obtain it, but their knowledge is largely empirical. The perfect physics equation of H-Mode has yet to be written.


Its value however "is unquestioned," confided H-Mode discoverer Fritz Wagner, in a June 2009 Newsline interview. "It is what makes the goals of fusion possible."


KSTAR's achievement, almost a year ahead of schedule, is of high significance for ITER.