"There is no alternative to fusion" 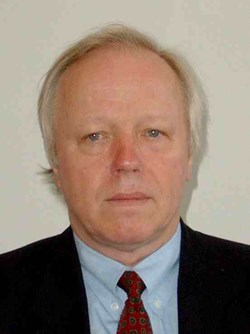 Remmelt Haange, the newly appointed Head of the ITER Project Department.
At its recent meeting, the ITER Council approved the appointment of Remmelt Haange as Deputy Director-General and Head of the ITER Project Department. "Rem," as people call him, is a very experienced fusion engineer. He worked on JET for more than 15 years and led the ITER team in Naka, Japan, for many years before he became Technical Director of the W7-X Stellerator project based in Greifswald, Germany. He is thus very familiar with the challenges of fusion technology as such and the challenges of managing a fusion project. And because he truly believes in fusion as "the only alternative" he has decided to join the ITER management rather than think about his retirement.


After studying and achieving his degrees at the German Technical University in Aachen, the Dutch-born nuclear engineer moved to the UK to work on the Dragon Project, a high temperature nuclear reactor project based in Winfrith, Dorset and supported by the Organization for Economic Co-operation and Development (OECD). From 1976 until 1979, he established a group of engineers and metallurgists within the multi-national High Temperature Materials Program in Wimborne, Dorset.


Later he became leader of the design group for JET's neutral injection beamline. In 1987, he took over JET's Fusion Technology Division and in 1992 he was appointed Deputy Head of the Torus and Measurements Department and also Shutdown Manager.
In 1993, he and his wife moved across the globe to Japan where he headed ITER's Nuclear Technology Divison at the Naka Joint Worksite. He was appointed Head of Site in 2003. Then, in July 2005, Rem was called back to Germany to lead the technical development of the Wendelstein project—which at that time was going through a difficult phase with very similar problems to what ITER is facing at the moment. "So I do have some experience in managing challenging situations and I guess that is why I am here," Rem says.


The challenges that lie ahead are "enormous and complicated" Rem stresses, "but they are not unsolvable if we all pull on the same string. The Baseline is approved and so the goals are defined. We now have to make sure that we meet these milestones. This fascinating, world-spanning project must become a success. There is no alternative to fusion."