Health, housing and transport on the CLI agenda 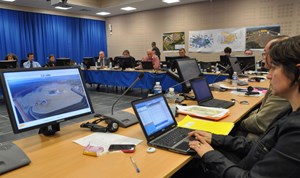 Anything that the public feels it should know falls under the jurisdiction of the CLI.
French law requires that a Commission Locale d'Information (CLI) be established every time a nuclear installation is created. An independent body composed of representatives from local government, environmental groups, trade unions, businesses and health professionals, the CLI acts as an interface between the nuclear installation operator and the local population.


Anything that the public feels it should know falls under the jurisdiction of the CLI. The group can request from the operator any documents deemed necessary, or call on independent laboratories to proceed with environmental and health investigations.


The ITER CLI was formally established in December 2009. On Wednesday 9 February, 29 of its 42 members convened for their annual General Assembly in the "Council Room" at the Château de Cadarache. 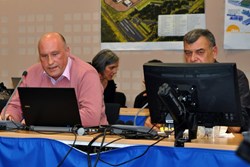 Tim Watson, here with CLI President Roger Pizot— the Mayor of Saint-Paul-lez-Durance—described the overall management strategy of the ITER worksite.
The ITER CLI General Assembly was the occasion to provide the Commission's members with up-to-date reports on the project's progress, and also to convey the public's preoccupations to the ITER management.


On the ITER side, Deputy Director-General Carlos Alejaldre gave a detailed overview of the ongoing licensing process, anticipating the opening of the Public Inquiry procedure in June of this year.


Head of the Civil Construction & Site Office Tim Watson described the "overall management strategy of the ITER worksite" and, more specifically, the "coordination procedures" that will be implemented in order to ensure that French regulations regarding health, security and social welfare are observed.


Thierry Brosseron, deputy Head of Agence Iter France, presented a striking graph showing the anticipated rise of the number of workers—to more than 5,000 in 2014-2015—on the construction site.


He explained how a "one-stop service" (guichet unique) will be set up to help contractors deal with housing and transport issues. This "one-stop service", that Agence Iter France will subcontract, is expected to be operational in the first months of 2012.

This striking graph, presented by Thierry Brosseron of Agence Iter France, shows the anticipated rise of the number of workers on the ITER construction site.
Providing transport and housing for the thousands of workers, both French and foreign, who will be employed on the ITER site is among the issues that raise the most concern among CLI members and the local population.


While Agence Iter France is launching an inventory of all available housing in the area, local mayors have come up with some creative suggestions: a new bridge spanning the Durance River in the Château vicinity, the reactivation of the long-abandoned train station in the village of Mirabeau and even a bicycle path that would run on the left bank of the Durance, parallel to the route départementale, between Manosque and ITER.