Through the loop flows the lithium The EVEDA Lithium Test Loop (ELiTe) was completed in a record twelve months in December 2010 at the JAEA Oarai centre, near Naka.
Fusion has to face several challenges before it enters its industrial age. One of them, systematically put forward by fusion opponents, is the development of materials able to withstand the harsh environment of fusion plasmas.


The deuterium + tritium reaction (D-T), which is presently the most accessible of all possible fusion reactions, produces one helium nucleus and one neutron.


While the helium nucleus remains trapped within the tokamak's magnetic field and communicates its energy to the plasma, the neutron, being electrically neutral, escapes the trap and hits the blanket modules that line the inside of the vacuum vessel.


Neutrons from a D-T fusion reaction are exceptionally energetic. Their repeated impact on the blanket modules will have a double effect: one desirable, the other not so ...


On the positive side, the neutrons' impact will heat the coolant circulating inside the blanket modules, and initiate the cycle that will eventually produce electricity. On the less positive side, the neutrons will gradually cause damage to the material. By disrupting the atomic lattice they will progressively "activate" the plasma-facing material and degrade its mechanical properties. Pascal Garin (left), formerly of CEA-IRFM and AIF now heads IFMIF EVADA. He is seen here as he greets French Prime Minister Fillon in Rokkasho in 2008.
Solving the material issue before post-ITER steady-state devices like DEMO or PROTO (1) enter operations is thus of utmost importance for the future of fusion. This will be the task of the International Fusion Materials Irradiation Facility (IFMIF) that will test and qualify advanced materials for use in future fusion power plants.


The project, which is presently in the Engineering Validation and Engineering Design Activities (EVEDA), is part of the Broader Approach that Japan and the European Union formally launched in 2007. IFMIF is coordinated from Rokkasho, in northern Japan, and headed by Pascal Garin, formerly of CEA's Institute for Magnetic Fusion Research (IRFM) and Agence Iter France.


IFMIF-EVEDA is presently engaged in the validation activities of two very innovative technologies: an accelerator prototype that will produce high-energy deuterium nuclei and a test loop ("EVEDA Lithium Test Loop" or ELiTe) destined to check and validate all of the thermo-hydraulic characteristics of the system.


In the future IFMIF facility, whose location has not been decided yet, accelerator and lithium loop will be coupled to generate neutrons similar to those produced in a fusion reaction.


While the accelerator prototype is being manufactured in Europe and will be tested in Rokkasho, construction of the test lithium loop was completed in a record twelve months in December 2010 at the JAEA Oarai centre, near Naka.


ELiTe was designed by JAEA with contributions from the European Domestic Agency for ITER (F4E) and the Italian Agency for New Technologies, Energy and Sustainable Economic Development (ENEA).  By the end of February, ownership of the installation will be transferred from the constructor Mitsubishi Heavy Industry to JAEA who financed it. As for operations, they could begin as early as June of this year.


ELiTe is fully representative of the future IFMIF lithium loop, with the exception of the target assembly width—reduced by a factor 2.6—and of the absence of a heat removal system as test operations will not involve nuclear interactions. 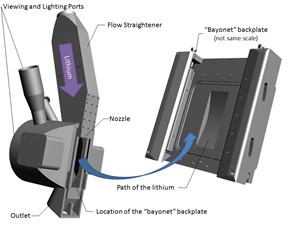 Four cubic meters (2.5 tonnes) of molten lithium flow through the ''target assembly.'' The lithium enters through a flow straightener, which generates a laminar flow; then a nozzle accelerates the lithium flow to a speed of 15 metres per second.
In the actual IFMIF lithium loop, the high-energy deuterium nuclei from the accelerator will impact a fast-flowing film of liquid lithium, generating high-energy neutrons which will in turn be directed to small samples of material to be tested.


In the test loop ELiTe, the IFMIF-EVEDA team will test the capacity of the system to generate a steady 25-millimetre-thick "liquid curtain" of molten (250 °C) lithium, flowing over a "backplate" at the regular speed of 15 metres per second.


The test loop will also validate several diagnostics systems, among them a high-speed video camera that shoots 20,000 frames per second, contact probes to measure the minute fluctuations on the lithium film surface, and a stereoscopic analysis device to capture images of the fluctuations.


Although it would seem like an exciting idea to connect the prototype accelerator to the lithium test loop in order to proceed on the validation of IFMIF principles, this is not anticipated in the framework of EVEDA. The reasons are cost, technical complexity and regulation as the coupled devices would then become a "nuclear installation."


(1) PROTO is the pre-industrial prototype that would follow DEMO.