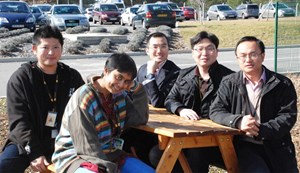 The new Monaco Postdoctoral Fellows at ITER. From left to right: Shimpei Futatani, Debasmita Samaddar, Ian Pong, Sun Hee Kim, and Jing Na.
Shimpei, Sun Hee, Jing, Ian and Debasmita may come from the four corners of the world but they have one thing in common. They are the new Monaco Postdoctoral Fellows at ITER, chosen from a pool of highly qualified applicants to spend two years at ITER within the framework of the ITER-Monaco Partnership Arrangement.


David Campbell, coordinator of the Monaco Postdoctoral Fellowship Program, highlighted the quality of the Fellows who have been attracted to ITER. "The five new Fellows were selected from over 60 applicants representing all of the ITER Members and many areas of science and technology research. We are very pleased to welcome such talented young researchers to the ITER project—we have already seen significant research output benefitting the project from the work of the first group of Fellows, who were appointed in early 2009, and have contributed to R&D activities in plasma diagnostics, plasma-wall interactions, plasma control and superconductors. ITER Organization management has been sufficiently impressed with the quality of their work that two have successfully applied for ITER Organization staff posts, while the fellowship appointments of three others have been extended."

Shimpei Futatani
Shimpei Futatani, from Japan, joined ITER as part of the Plasma Confinement Group. Using advanced non-linear simulation codes, he will be working to improve the physics understanding of plasma transport and stability processes in a particularly challenging environment: the plasma edge pedestal. "We need to improve the understanding of the underlying physics of this area of the fusion plasma and, what is more, to find a way to control ELMs (link)," says Shimpei. He is learning a new simulation code JOREK—one that he qualifies as a "super code"—that will allow him to contribute to predictions of ITER plasma performance and edge localized mode (ELM) behaviour.


Shimpei was a researcher at the Université de Provence from 2007-2010, during which time he successfully completed two independent PhDs in the study of turbulent transport of impurities in fusion plasmas (Kyoto University, 2008; University of Provence, 2009). "For researchers interested in fusion," Shimpei exclaims, "being at ITER is a dream!"

Sun Hee Kim
Sun Hee Kim, from Korea, concurs. "The Monaco Postdoctoral Fellowship is almost the only way for young researchers to join the ITER Project and to work with experts in the field. I am very proud of being selected as one of the Monaco Fellows." Before joining ITER, Sun Hee earned his PhD from the Ecole Polytechnique de Lausanne, and spent one year as an EFDA postdoctoral researcher at the Magnetic Fusion Research Institute (IRFM) at nearby CEA where he was involved with the development and validation of a new free-boundary plasma evolution code, FREEBIE.


Sun Hee's research focuses on the computational analysis of burning plasma scenarios. At ITER, he will study the feasibility of advanced plasma scenarios such as hybrid mode and steady state, performing analysis with recent data and a greater set of physics and operation constraints than ever before. "The tokamak discharge simulator that we use, CORSICA, will provide useful information for designing tokamak components such as diagnostics and plasma control systems, and for preparing future ITER operations and experimental campaigns," explains Sun Hee.

Jing Na
As part of the Central Engineering & Plant Support Department at ITER, Jing Na from China will focus his work on advanced control techniques for the cryogenic systems. Cryogenic plants and their control are highly complex; ITER cryogenics will have to cope with various normal and abnormal operational phases including superconducting magnet quench recovery; fast energy discharge; and dynamic heat load variations in the magnets. Working with the functional analysis and modeling of the cryogenic processes, Jing will contribute to the establishment of a simulator to test advanced controls with a view to a better understanding and optimization of cryogenic system behavior.


Jing earned a PhD for research into the control of systems with delays and non-linearities from the Bejing Institute of Technology, and taught for one semester at the Kunming University of Science and Technology before accepting the offer to come to ITER. "To be part of a project that aims to develop a new, cleaner form of energy is very motivating," remarks Na. "I am sure that I will evolve here and advance in my field of research."


Ian Pong, from the UK, completed his PhD in applied superconductivity at the University of Cambridge, following a Master's in engineering earned at the Imperial College of London and secondary studies in Hong Kong. His research interests in condensed matter and materials physics led him to a two-year postdoctoral fellowship at CERN, where he worked on the phase and microstructural development of Nb3Sn superconductors that will be used in the Large Hadron Collider (LHC), as well as in the ITER superconducting magnets.

Ian Pong and Debasmita Samaddar
"The magnet procurement for ITER represents by far the largest worldwide production of superconducting Nb3Sn wire in history, and so this is a truly unique opportunity for me to understand in significant detail the factors, both metallurgical and process-related, that influence the performance level and variability of the superconducting material," says Ian.  At ITER, he will coordinate the superconductor benchmarking and analyses activities currently underway in reference laboratories and universities around the world, and will follow the tests that are carried out as part of the quality assurance process for every step of superconducting strand manufacture. "The cable used in the ITER magnets each contains hundreds of superconducting strands, and each of the ITER magnets will operate under different conditions," explains Ian. "Testing and cycling the manufactured strands across a wide range of temperature and magnetic field will allow us to predict the performance of the full conductor under ITER conditions."


Improving tools for modelling fusion plasmas, particularly turbulent transport, is the focus of research for Debasmita Samaddar from India. She compares plasma turbulence to different sized eddies in an ocean current.  "By understanding the turbulent transport of particles between the hot core and the cool edge," she explains, "we can better plan for their confinement." She will explore parallelization options for numerical simulations of ITER; temporal parallelization (parareal algorithm) is her main area of interest. She believes that such time-efficient computer simulations will make exploring parameters for ITER operation more feasible. Long term, she hopes that simulating multiple plasma shots on ITER in real time will be possible.


Debasmita was recently awarded a PhD for research in the temporal parallelization of computations of plasma turbulence from the University of Alaska Fairbanks (UAF). She also worked as a research assistant at UAF, collaborating in particular with the Oak Ridge National Lab. She is excited to join the ITER team. "The ITER project has to be done," says Debasmita. "It's clear that we need a new energy source, but that's not the only reason. ITER will also answer many scientific questions."