From Princeton to Cadarache: Rich Hawryluk 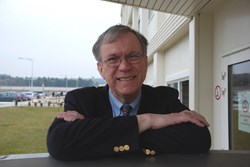 
From 1997 to 2008, Rich Hawryluk was the Deputy-Director of the US Princeton Plasma Physics Laboratory (PPPL). "Rich's appointment to this key position will be seen worldwide as a major boost to the ITER Project," said PPPL Director Stewart Prager. "The upper management of ITER is now entirely filled with 'the best in the world.' While we will greatly miss his irreplaceable leadership within PPPL, Rich's new activity is very much a net plus for all of us in fusion, given the central role of ITER to the world fusion program."


A physicist by training, Hawryluk joined PPPL's research staff in 1974 and was the head of the Tokamak Fusion Test Reactor (TFTR) project when it produced record-breaking results in the early 1990s."I was very fortunate to participate in the TFTR deuterium-tritium experiments, which provided the first indications of the physics associated with a burning plasma," Hawryluk said. "I look forward to working with the ITER team in constructing a facility such that future scientists and engineers will be able to fully assess the physics of a burning plasma, which is critical for the development of fusion energy." 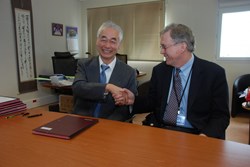 Signed and sealed: Director-General Osamu Motojima officially welcomes Rich Hawryluk as his new Deputy and Head of ITER Administration.
Although moving from New Jersey to southern France will certainly represent a "new chapter" in Rich Hawryluk's life, working at ITER will not. As part of the US delegation to the Management Advisory Committee (MAC), he was closely involved in the project's development from the very beginning. When a comprehensive review of the ITER design was launched in 2007, he—together with David Campbell from the ITER Directorate for Plasma Operation and Paul Thomas from the Heating Systems Division—participated in the physics review. In 2009, he also chaired the design review of the ITER vacuum vessel.

As former head of the TFTR project at PPPL, he acquired experience managing a big science project. "With an annual budget of USD 80 million, the project was of course smaller than ITER, but still large from a national perspective," he explains. As Head of the ITER Administration Department, he sees the biggest challenge ahead as the sheer size and the international nature of the project.


His personal goal, he stresses, will be "to provide an efficient and effective administration for this project in order to enable us to successfully build the machine. Whether it is project management, finance and budgets, procurement, or human resources, we always have to keep the end product in mind, which is construction of the ITER machine. ITER will answer the question 'Is fusion energy a viable option?'"