A "professor at heart" on mission for ITER 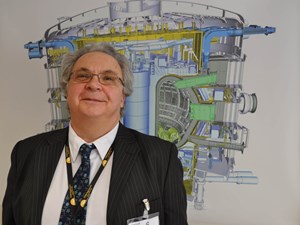 As a ''long-timer in fusion,'' Prof. Tendler will promote communication within the worldwide fusion community and sow the seeds of the fusion community of tomorrow.
As a veteran fusion physicist Professor Michael Tendler, who just joined ITER on an "expert" mission, is familiar with the worldwide fusion community; as a professor at the famed Alfvén Laboratory of the Swedish Royal Institute of Technology and one of the former leaders of the Erasmus Mundus program, he is concerned with the training of the future generations of fusion scientists.


"I'm a long-timer in fusion," he explains. "I began working in plasma physics in the then-Soviet Union in the late 1960s! After moving to Sweden in 1975, I had the privilege to benefit from the ideas and advice of Hannes Alfvén, who pioneered fusion research and who was awarded the Nobel Prize in Physics in 1970. At heart, however, I am a professor."


His mission at ITER will be to strengthen the communication channels between the project and the large and scattered family of fusion scientists. "ITER," he stresses, "has been the goal of the fusion community for the past thirty years. The project is like the ultimate crescendo of a symphony that several generations of scientists have built up. Communicating its high notes is important for the spirits of our colleagues throughout the world."


What is important also—and has been clearly stated as part of professor Tendler's mission—is attracting young, talented scientists to participate in ITER activities, and sowing the seeds of the fusion community of tomorrow.


"We have a Master's program in fusion within Erasmus Mundus," he explains, "and over the past six years, we have been able to produce some 20 graduates every year. Now, we're extending this program to the doctoral level. This is an experience that perfectly fits ITER's goals and infrastructure."


A foreign member of the Russian Academy of Sciences since 2003, the Saint-Petersburg-born physicist was elected in 2005 to the Royal Swedish Academy of Engineering Sciences and is now a member of its Executive Committee. Professor Tendler also sits, or has sat, on the Boards of several committees and institutions in countries as different and distant as Australia and Israel, Estonia and China, Belgium and Russia...


To ITER, he brings his expertise of the worldwide fusion community, both in its human and scientific dimensions, and also his long experience in the challenges of science education. His visits to Cadarache will bring him back to a place he is familiar with: in 1990, Professor Tendler spent several months working at the brand-new Tore Supra fusion installation.