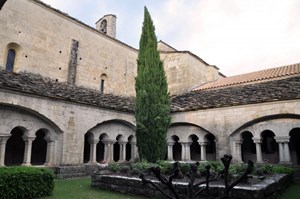 The 12th century cloister has been reconstructed based on the few surviving arches—Ganagobie is now very much like it was in the late High Middle Ages.
Thirty kilometres north of Cadarache, the Benedictine monastery of Ganagobie stands on a perfectly flat plateau overlooking the Durance Valley. The place has often been described as "an island in the sky," and an island it is ... lost in the soft waves of the hills and the mist rising from the river.
On a clear day, the view extends to the distant peaks of the southern Alps as far as Mount Viso on the Italian border. In all directions the panorama is spectacular. A thousand years ago, the place attracted monks seeking beauty and solitude. Sometime around the year 950, a church and a monastery were built and a Benedictine community established.
Monks lived, worked and prayed here throughout the Middle Ages, the Renaissance and up to the French Revolution at which time they were expelled, the buildings partly demolished and sold as "National Property." For the first time in 800 years, the plateau was deserted. Nearly a century would pass before the religious community would be revived, monks reinstalled and the first, timid reconstruction work carried out. 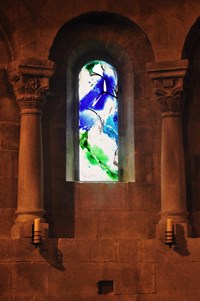 ''I groped my way through the colours as one gropes his way to Paradise,'' says Father Kim En Jung, the Korean-born contemporary artist who designed and produced the church's stained glass windows.
For most of the twentieth century, the monastic community—at times reduced to a single member!—lived on the half-ruined, half-rebuilt premises. While Ganagobie was drawn into deeper and deeper solitude, other monks belonging to the same Benedictine order were facing a different problem: their Abbey at Hautecombe in Savoy, the burial place for Italian kings, was being overwhelmed by tourists. By the mid-1980s, the situation had become unbearable: the Benedictine monks at Hautecombe, for whom silence and quietude was so essential, decided to move to Ganagobie.
"We spent five years cleaning up the ruins and rebuilding," explains Dom Michel Pascal, abbot at the time of the community. "Thanks to a recently passed law, we managed to get funds from private companies and launch a real restoration."
Ganagobie now is very much like it was in the late High Middle Ages. The 12th century cloister has been reconstructed based on the few surviving arches, and the old church's 72 square foot mosaic and its bestiary of fabulous animals, the largest in France, has been beautifully restored. 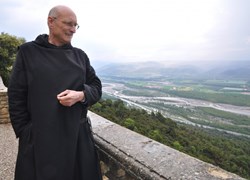 Standing at the edge of the ''island in the sky'', Dom Michel Pascal, the Abbot emeritus of the monastery of Ganagobie.
Although living according to community rules formulated more than fifteen centuries ago, the twelve monks of Ganagobie are men of the twenty-first century. They use cell phones, have email addresses and surf the internet. And when faced with the replacement of the church's long-gone stained glass windows, they chose a resolutely contemporary option: they turned to a Dominican monk, the famed Korean-born artist Kim En Jung.

Father Kim spent several weeks at Ganagobie studying the way light penetrated the church nave at different hours of the day. Back at his workshop in Chartres—a stained-glass world capital if there is one—he used enamel and glass-powder baking techniques to produce nine windows, completing his work in 2006.


"I groped my way through the colours as one gropes his way to Paradise," says the artist. In sharp contrast with the thousand-year-old stones of the church walls, his work has brought a final touch to the centuries-long process of restoring Ganagobie.