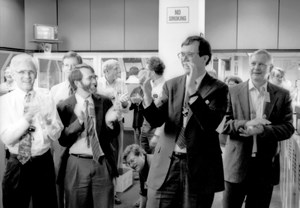 Rich Hawryluk is seen here in December 1993 at PPPL, celebrating TFTR's first deuterium-tritium shot. One year later the US machine was to pass a symbolic threshold with a production of 10 MW of fusion power.
The 1970s were years of great achievements, both scientific and technological. Men were routinely landing on the Moon, the Concorde had introduced supersonic transatlantic service, and microprocessors would soon trigger one of the major revolutions of the 20th century.


In fusion, too, big things were brewing. The success of the Russians with the tokamak concept in the previous decade had opened new and exciting perspectives.


In the Soviet Union, the US, Japan, and France, plasma physicists were all coming to the same conclusion: they needed far bigger machines, machines that—due precisely to their size and energy-confinement capacity—would reach the threshold of fusion power production.


Results obtained in the Soviet T3, the French TFR, the American Symmetric Tokamak (converted from the C-stellarator) and ORMAC had convinced the fusion community that now was the time to take the Big Leap.


"Going toward a much larger machine was the next natural evolutionary step," recalls ITER Deputy Director-General Rich Hawryluk, a post-doctoral researcher at the Princeton Plasma Physics Laboratory (PPPL) at the time. "There was a great deal of optimism about how quickly we would develop fusion. We didn't know at that time how many outstanding scientific and technical issues remained."


On all continents, in every lab, a similar mood prevailed. Soon giant tokamak projects were sprouting in the Euratom organization, at PPPL, at the Kurchatov Institute in Moscow and at Japan's Atomic Energy Agency.


"We needed to achieve a gigantic leap in scale," recalls Jean Jacquinot, a veteran physicist who joined the CEA fusion program in 1961 and later headed Europe's JET. "We were fascinated with the possibility of building a machine that would actually produce fusion power ... ." 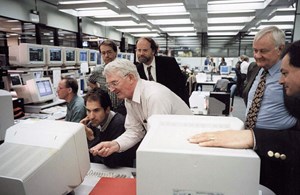 The 1997 campaign at JET: Martin Keilhacker, at the time JET director, looks on as his deputies Alan Gibson and Jean Jacquinot check the data on the computer screen. Also present are Guido Huijsmans, now with ITER Plasma Operations, Tullio Bonicelli, Nicolas Deliyanakis and Derek Stork. Paul Thomas and Akko Maas are outside the frame.
Thinking back on the potential and the challenges of the endeavour, Rich Hawryluk comments: "The machine we were about to design and build was an incredible extrapolation, arguably even greater than the one we are presently facing with ITER."

Fusion machines, throughout the 1960s and 1970s, had been relatively small installations. The size and complexity of the giant tokamaks, however, would require an industrial approach that was not familiar to the fusion community.
It took six years (1976-1982) to build the Tokamak Test Fusion Reactor (TFTR) at PPPL and about the same time (1978—1983) to complete Europe's Joint European Torus (JET) in Culham, near Oxford (UK). In Japan, the boldly named "Breakeven Plasma Test Facility" (later renamed JT-60) began operations in 1985, three years before the Soviet T-15 obtained first plasma. Among these four machines of comparable size, only TFTR and JET were designed to perform deuterium-tritium (DT) operations.


The physicists and engineers who operated these new tokamaks were like 15th century navigators sailing the vast, unchartered seas. "In terms of power, pulse duration, energy confinement time, and confinement of energetic particles, JET, JT-60U and TFTR were opening new territory that had been  until then inaccessible," says Jacquinot.
The Columbuses and Magellans of fusion competed as much as they collaborated. "Sure, as you would expect, there was competition," acknowledges Hawryluk, "but it was based on respect for each other."


Personnel would move from one machine to the other. Paul Thomas, now Head of the Heating & Current Drive Division at ITER, arrived at JET in 1980 and was sent to Princeton the following year to take "driving lessons" on the Poloidal Divertor Experiment (PDX) Tokamak. He would later sit on the TFTR Program Committee to review the progress of that American machine.
JET and TFTR routinely exchanged data and feedback. "We kept no secrets from each other. However cultures, philosophies and technical approaches were different," says Jacquinot. "More than anything, what each team brought to the other was a different and stimulating intellectual environment."


JET had achieved fusion with 10 percent tritium only. Two years later, on 9 December 1993, also with massive media coverage and amidst "a great sense of excitement," it was TFTR's turn to make headlines. A 50/50 mix of deuterium and tritium enabled the PPPL machine to produce shots that culminated with 6.2 MW of fusion power produced. Eleven months later, on 2 November 1994, the symbolic 10 MW threshold was crossed.
The "friendly competition" was not over. In 1997, JET launched a campaign of what Jacquinot calls "actual DT plasmas" whose most spectacular achievement was not the one that is most often mentioned. "The 16 MW shot of 1997 was spectacular indeed, however we did it mainly to beat TFTR's 1994 results. What really mattered in the 1997 campaign were the 5-second 4 MW stationary shots we did in H mode, because these shots are the basis for extrapolation to ITER."


If 1997 was a great year for JET, it was a sad one for TFTR. "From mid-1993 to 1997 we ran continuously, night and day," recalls Hawryluk. "People were publishing at a wonderful rate." However due to budgetary constraints, in 1997 the machine was stopped. 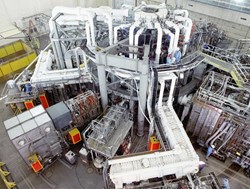 ''What we set out to do in the 1970s was largely accomplished,'' says Hawryluk today. TFTR (here in 1989) had been ''unbelievably successful,'' however due to budgetary constraints, in 1997 the machine was stopped.
Hawryluk remembers, "We took it apart as part of decommissioning and examined it. After 15 years of intense operation at and above design requirements, everything still looked very good."
TFTR personnel went on to work for DIII-D in California, C-Mod, JET and JT-60U or stayed at PPPL to develop the National Spherical Torus Experiment (NSTX), a fusion installation that reused part of TFTR's hardware.


"What we set out to do in the 1970s was largely accomplished," says Hawryluk today. "The machine had been unbelievably successful. Not only did we produce significant fusion power and demonstrate that we could conduct tritium experiments safely, but more importantly we extended our understanding of fusion plasmas including the confinement of alpha-particles from the D-T reactions."


At JET, by the end of the 1990s, "the identification of alpha-particle heating and the studies of alpha-particle plasma interactions completed the program," recalls Paul Thomas. "It was then admissible to move on to activities that had not been anticipated in the Design Document of 1975."
The European tokamak, upgraded with a new divertor, now pursues what remains as its principal mission: being a test bench for ITER, particularly in the realm of ELMs, plasma disruptions and—thanks to a new ITER-like wall—plasma-surface interactions. A year and a half ago, JET Director Francesco Romanelli confided to Newsline that "a deuterium-tritium experiment is envisaged to allow extrapolation of the scenarios to ITER-relevant conditions."


Lighting the fusion fire in both TFTR and JET had required more power than the fire eventually returned. With an input/output energy ratio (the famed Q) of respectively 0.27 and 0.67, the two machines remained below the breakeven threshold. (Progress in fusion science, technology and materials now enable the fusion community to aim for Q=10 in ITER.)


Q, however, was not the only measure of success: two decades ago, JET and TFTR demonstrated that fusion energy could become a reality within the foreseeable future. Both machines had opened the way to ITER and future industrial fusion installations.